Bitcoin Plunges 18% In An Hour: Could Leverage Kill This Bull Market?

When Bitcoin (CRYPTO: BTC) sneezes, other cryptocurrencies catch a cold. That's just the way it is. The world's first, and largest cryptocurrency by market capitalization, Bitcoin is often viewed as a gauge of the health of the broader crypto markets.

Early Saturday morning, Bitcoin fell approximately 18%, to as low as $42,875 as of 12:30am ET. This decline happened over a one hour period.

Since then, Bitcoin has recovered some of these losses, though the token does remain significantly below the $55,000-$59,000 range the token traded in for much of the past week.

Other major cryptocurrencies followed Bitcoin's lead, selling off in dramatic fashion. The world's second-largest cryptocurrency by market capitalization, Ethereum (CRYPTO: ETH) also dipped to a one-month low of $3,525 per token, before recovering a significant portion of these losses.

This market-related slump did provide a "buy the dip" opportunity for other high-flying tokens such as Terra (CRYPTO: LUNA) , which did dip, but promptly shot to new all-time highs following this crash. 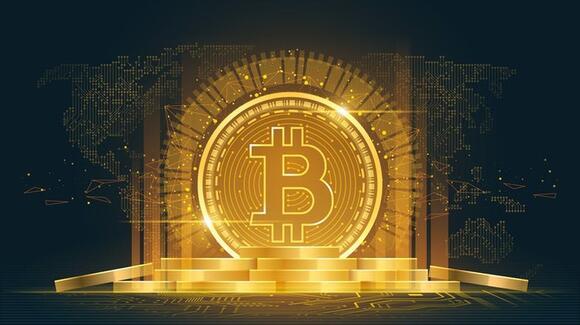 Many experts have tied what appears to look like a flash crash to the amount of leverage in the crypto markets right now. It's estimated that "only" 4,000 BTC tokens were sold over this hour-long drop, with 1,500 tokens being sold at once, initiating this crash.

Now, 1,500 Bitcoin (at pre-crash prices) works out to around $78 million, and 4,000 BTC comes to approximately $208 million. For a token with a market capitalization which was more than $1 trillion, that's chump change.

However, crypto markets are notorious for allowing higher leverage than other well-regulated markets, leading to concerns that what should be contained, short-term price drops could lead to market contagion.

The Bitcoin futures market is one of the first places investors go to gauge the amount of leverage in the crypto world. Futures contracts are derivatives, like options, which allow investors to buy a particular asset at an agreed-upon price, at a future date. However, a smaller amount of up-front capital is needed to purchase these contracts, allowing investors to gain significantly higher exposure to an asset than the nominal amount of what one invests.

In other words, Bitcoin futures allow for investors to gain leverage, by putting up a smaller amount of initial capital to reap higher rewards, as long as Bitcoin prices go up. If prices dip sharply, however, investors may liquidate positions to minimize losses, causing panic selling as investors look to jump ship.

Open interest in the Bitcoin futures market has surged in recent days, leading some to speculate that an over-saturation of leverage could be taking place. Thus, what would appear to be significant, yet relatively small, sales of Bitcoin appear to have driven these outsized moves, at least in part due to the amount of leverage that's built up in the futures markets of late.

Much has been made about the record margin leverage in equity markets of late. However, leverage in the crypto market appears to be a key factor that's just grabbed the attention of investors right now.

Given the recent run we've seen with Bitcoin, and the broader crypto market, investors have reason to be concerned with these recent violent moves in the price of what are supposed to be the most stable tokens.

That said, it's worth noting that various cryptocurrencies did react differently to Bitcoin's sell-off. While most major cryptocurrencies were down, investors can point to specific high-momentum tokens such as Terra Luna as examples of continued "buy the dip" interest among investors.

Riding the Oracle of Omaha's coattails has long been a moneymaking strategy.
STOCKS・22 HOURS AGO
The Motley Fool

It has staying power.
MARKETS・21 HOURS AGO
The Motley Fool

Though there are a lot of ways to gain exposure to Bitcoin, these stocks may be the worst.
STOCKS・21 HOURS AGO

If the market crashes, get defensive.
STOCKS・17 HOURS AGO
The Motley Fool

A crash that started on Friday has continued on Monday.
STOCKS・14 HOURS AGO
GOBankingRates

Stock Market Crash: ‘Godfather’ of Technical Analysis Predicts 20% Drop — Should You Be Concerned?

It has been a tough year so far for the U.S. stock market, with major indices like the S&P 500, Dow and Nasdaq all declining since the beginning of 2022 after delivering strong gains in 2021. At...
STOCKS・19 HOURS AGO

The market is on a downhill slide. What does that mean for your portfolio?
ALEXANDRIA, VA・19 HOURS AGO
The Motley Fool

The ongoing flight to safety ought to strong favor these defensively oriented dividend stocks.
STOCKS・19 HOURS AGO
The Motley Fool

It's all about interest rates today, but take note: GM is planning a big announcement tomorrow.
STOCKS・15 HOURS AGO
The Motley Fool

With a low price-to-earnings ratio, Levi's stock may be undervalued.
STOCKS・18 HOURS AGO
The Motley Fool

These high-growth companies are leading players in their respective industries.
STOCKS・19 HOURS AGO
The Motley Fool

Under 35? 3 Reasons Why a Crypto and Stock Market Crash in 2022 Could Be a Good Thing in the Long Run

The benefits of taking a cautiously optimistic attitude toward a sell-off.
STOCKS・21 HOURS AGO
The Motley Fool

Investors should get familiar with this fast-growing blockchain.
MARKETS・15 HOURS AGO
MarketWatch

Bitcoin’s losses deepened on Monday, as investors expect the Federal Reserve’s coming meeting to set the stone for a shift away from its easy-monetary policy.
STOCKS・13 HOURS AGO
The Motley Fool

Gravity is a law, not a suggestion, for unprofitable space stocks.
AEROSPACE & DEFENSE・12 HOURS AGO