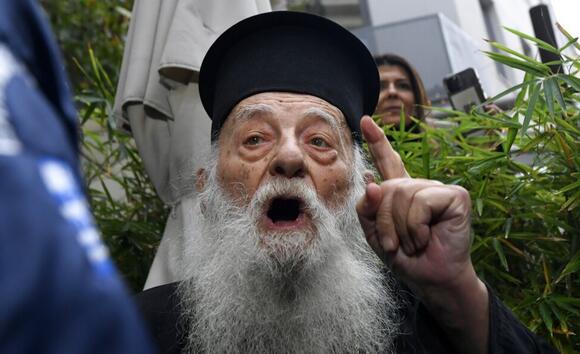 A n elderly Greek Orthodox priest heckled Pope Francis as he arrived for a visit with Archbishop Ieronymos II in Athens, Greece.

The priest shouted, "Pope, you are a heretic!", three times as security quickly apprehended him and took him away Saturday. The pope had already entered the archbishop's residence and did not appear to have heard.

There were also small protests against the pope on the island of Cyprus, where he stopped earlier in the trip.

VIDEO: BIDEN VISITS THE POPE AND TELLS HIM, 'NEXT TIME YOU HAVE TO BUY THE DRINKS'

Despite the animosity outside, the two church leaders were friendly and pledged to work together to help issues such as climate change and immigration.

The incident highlights the distrust between some members of the Eastern Orthodox and Catholic churches that remains nearly a thousand years after the two groups split in 1054. During the visit, Pope Francis reiterated Pope John Paul II's apology to the Orthodox world for any sins his church had committed against them.

The pope is visiting Greece on a three-day state visit.

A couple in are suing the state government after a religious adoption agency allegedly refused to help them because they were Jewish. The lawsuit, filed by Elizabeth and Gabriel Rutan-Ram in the Chancery Court of Davis County, Tennessee, on Wednesday, names the Tennessee Department of Children's Services as the defendant and is attempting to challenge a law that allows religious adoption agencies to deny service to whoever agencies believe violates their "religious or moral convictions."
TENNESSEE STATE・12 HOURS AGO
WashingtonExaminer

Former White House press secretary Kayleigh McEnany didn't pull any punches when describing President Joe Biden's Wednesday press conference. McEnany joined co-hosts on Fox News's Outnumbered on Thursday to discuss the press conference, which reflected on Biden's accomplishments during his first year in office. “I thought that was the most...
PRESIDENTIAL ELECTION・5 HOURS AGO
WashingtonExaminer

Public schools in Flint, Michigan, will only offer virtual classes for the foreseeable future after the district announced that a period of virtual instruction set to expire next week would be extended indefinitely. The decision to postpone the planned Jan. 24 return to in-person instruction was announced by Superintendent Kevelin...
FLINT, MI・13 HOURS AGO
UPI News

Pope Francis urges Christians to look to heaven during Epiphany

When and why did Pope Benedict XVI resign?

A German law firm has accused the former Pope Benedict XVI of failing to act in four historic child abuse cases that he was allegedly notified of during his tenure as archbishop of Munich and Freising.The now retired pontiff, 94, held the post in question between 1977 and 1982 and was allegedly presented with information about the abuse at that time but declined to take action, prompting the firm, Westpfahl Spilker Wastl, to accuse him of “misconduct”.“In a total of four cases, we came to the conclusion that the then-archbishop, Cardinal Ratzinger, can be accused of misconduct,” said Martin...
RELIGION・13 HOURS AGO
The Independent

Pope Francis criticised so-called cancel culture during his annual address to the Vatican’s Diplomatic Corps, saying that it stifles freedom of expression and rewrites the past.The Pope, during his address on Monday, warned of “a form of ideological colonisation, one that leaves no room for freedom of expression and is now taking the form of the cancel culture invading many circles and public institutions”.“Cancel culture is invading many circles and public institutions. As a result, agendas are increasingly dictated by a mindset that rejects the natural foundations of humanity and the cultural roots that constitute the identity of many...
RELIGION・9 DAYS AGO
Newsweek

Unvaccinated Priests Are Not Christian | Opinion

Being anti-vax shows no value to one's own life or the lives of others.
NEW YORK CITY, NY・1 DAY AGO
The Independent

Vatican No. 2 and deputy both positive for COVID

The Vatican secretary of state and his deputy have both tested positive for the coronavirus, Vatican officials said Tuesday.Cardinal Pietro Parolin, who serves as the Vatican's secretary of state and the pope's No. 2, has “very light” symptoms, while Archbishop Edgar Peña Parra is asymptomatic, officials said.There was no immediate comment on their last contact with Pope Francis It wasn't clear if Francis has received a booster shot, which has been administered to his predecessor, Pope Emeritus Benedict XVI.These are the first cases of COVID-19 confirmed so high up in the Vatican hierarchy since the pandemic began.___Follow AP’s pandemic coverage at https://apnews.com/hub/coronavirus-pandemic Read More Bad luck: Pope acknowledges he got caught at record storeKin of dead sex abuse victim sue under new California lawPope slips out of Vatican to visit record shop, gets CD
RELIGION・2 DAYS AGO

Is Pope Francis right about babies and pets?

Pope Francis rattled some big cages when he said people who adopt pets instead of people are selfish in some cases. The last part of that sentence was left out of many stories, and the rest informed some rabid reactions from pet lovers, as well as some childless-by-choice folks. Opinions...
ANIMALS・12 DAYS AGO
The Independent

Pope on prisons: No inmate should ever be deprived of hope

Pope Francis issued a plea on behalf of prison inmates Wednesday, saying they should never be deprived of hope and always be given the opportunity to redeem themselves.In remarks at his weekly public audience at the Vatican, Francis told the faithful that “we risk being imprisoned in a justice that doesn’t allow one to easily get back up again and confuses redemption with punishment.”“For this, I want to recall today in a particular way our brothers and our sisters who are in prison,’’ the pontiff said. “It’s right that those who have made a mistake pay for their mistake,...
RELIGION・1 DAY AGO
sacramentosun.com

Pope Francis: Dont Be Afraid to Have Children

ROME - Pope Francis has called on childless couples to adopt children and is urging institutions to make the process easier. He also condemned the practice of adopting pets instead of children, calling it a "form of selfishness.'. In his first general audience of the New Year, Pope Francis stressed...
RELIGION・14 DAYS AGO
MarketWatch

ROME (AP) — Pope Francis suggested Monday that getting vaccinated against the coronavirus was a “moral obligation” and denounced how people had been swayed by “baseless information” to refuse one of the most effective measures to save lives during the pandemic. Francis used some of...
PUBLIC HEALTH・9 DAYS AGO

(Vatican City. Rome) -- Pope Francis is denouncing the politicization and misinformation surrounding COVID-19 vaccines. The Pope said vaccines are "the most reasonable solution for the prevention of the disease." He called for some sort of "reality therapy that makes us confront the problem head on." The Pope said vaccines have decreased "severe repercussions" of coronavirus and vaccination efforts should continue around the world.
PUBLIC HEALTH・10 DAYS AGO
Time

(ROME) — Pope Francis suggested Monday that getting vaccinated against the coronavirus was a “moral obligation” and denounced how people had been swayed by “baseless information” to refuse one of the most effective measures to save lives during the pandemic. Francis used some of his...
PUBLIC HEALTH・10 DAYS AGO
Shropshire Star

Pope Francis, a lover of classical music, slipped out of the Vatican to visit old friends who run a Rome record shop and came away with a gift of a CD. Reuters brings you the latest business, finance and breaking news video from around the globe. Our reputation for accuracy and impartiality is unparalleled.
RELIGION・8 DAYS AGO

ROME — In a sweeping speech on the pandemic and other global issues, Pope Francis on Monday called for widespread vaccination in all countries and suggested the global coronavirus response was being complicated by “baseless information or poorly documented facts.”. “Vaccines are not a magical means of healing,”...
RELIGION・10 DAYS AGO
evalleytimes.com

Pope On Tuesday, Francis left the Vatican in surprise to visit a record store in downtown Rome. He was already aware of other occasions when he came to the Italian capital as Cardinal and Archbishop of Buenos Aires, and received a record Traditional music as a gift from the owners.
RELIGION・9 DAYS AGO
Complex

Pope Francis is opening up about his thoughts on “cancel culture.”. The religious leader spoke Monday during his annual Vatican’s Diplomatic Corps address, where he talked to 183 reps from countries accredited to the Holy See, calling COVID-19 vaccinations a “moral obligation.” Beyond that, the Pope shared his concerns about “cancel culture,” and people getting in trouble online for being politically incorrect, per Politico.
RELIGION・10 DAYS AGO
AFP

Former pope Benedict XVI knowingly failed to take action to stop four priests accused of child sex abuse in Munich, according to the findings of a damning independent report presented on Thursday. Marx had last year offered Pope Francis his resignation over the church's "institutional and systemic failure" in its handling of child sex abuse scandals.
PUBLIC SAFETY・16 HOURS AGO