Winter feel warmer lately? In these places, it really is 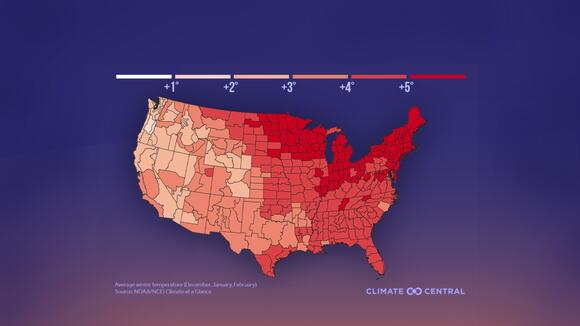 (NEXSTAR) – The planet has been getting just a little bit hotter every year, but the effects aren’t being felt equally. In the United States, some regions are just 1 or 2 degrees warmer than they were 50 years ago. In other areas, average winter temperatures have jumped 5 degrees Fahrenheit.

New data analysis from Climate Central shows the Northeast and the Great Lakes are disproportionately impacted by rising winter temperatures. In states like New York, Maine, Vermont, New Hampshire, Wisconsin and Minnesota, every single region of the state studied has seen winters get 5 degrees warmer on average.

NOAA predicts 70% chance of La Nina winter. Here’s what that means where you live

Climate Central said 98% of the approximately 250 cities it studied saw an increase in average winter temperatures since 1970.

There are just a few cities that buck the trend and have seen colder winters since 1970: Marquette, Wis.; Idaho Falls, Idaho; Eureka, Calif.; Denver; and Biloxi, Miss. What makes these cities the exceptions? It could have to do with a hyperlocal microclimate, or something else entirely.

“The ‘why’ behind most temperature outliers is not known,” said Jen Brady with Climate Central. She said the five cities with a slight cooling trend “are distributed without a strong regional connection, which further suggests we are dealing with local conditions that may be linked to the particular weather station and not a larger pattern.”

The larger pattern is illustrated by the data in the map above: warmer winters across the board.

What are the consequences of warmer winters? For one, the researchers point out that pests like mosquitoes could start flourishing in areas previously too cold to survive in. Certain fruit trees, like cherries and apples, also need a certain number of “chill ho urs” in winter in order to yield fruit in the spring and summer. Warmer winters also could mean smaller snowpacks – especially in the West where drought is a recurring problem. It also means a shorter ski and winter sport season – ruining the fun and hurting tourism at the same time.

Stay Informed: WCCO Weather App | Live Radars | School Closings & Delays | More MINNEAPOLIS (WCCO) — The National Weather Service has issued another widespread wind chill advisory for Minnesota. WCCO Meteorologist Chris Shaffer says the advisory will be in effect through noon Thursday. It could feel like minus 30 to minus 40 degrees at times. Frostbite can attack exposed skin in less than 20 minutes in these conditions. (credit: CBS) The Twin Cities will have a high of 2 degrees Thursday, with pretty much the entire state in the same frozen boat. It will be even colder in western and northwestern Minnesota. Shaffer says a little clipper system will drop light snow across the state beginning Friday afternoon through early Saturday morning. It will reach the metro by about dinnertime. Snow totals will only range between a dusting in southern Minnesota, and over 2 inches in the Arrowhead. Temperatures will warm into the teens Friday through Monday, with more snow chances Sunday and Monday. We’ll dive back into single-digit highs next Tuesday.
MINNEAPOLIS, MN・6 HOURS AGO
CBS Boston

BOSTON (CBS) – Time to check your woodpile, make sure there’s still some gas in the snowblower, and glance at the calendar to see how long until pitchers and catchers report. We’re passing the midway point of winter as daylight increases and average temperatures start the slow climb toward spring and summer. Of course, we all know that process can take a while in New England. Every year is different though and it’s only natural to start wondering what we’ll be facing during the second half. We know that up to this point, it’s been a fairly lackluster season....
BOSTON, MA・9 HOURS AGO
wccbcharlotte.com

Winter Storm Watch in effect Thursday night through Saturday Morning. A cold front will bring widespread rain showers to the region Thursday. Colder temperatures flood the region as this boundary stalls to our south and east Thursday night. As of the latest model trends, a weak disturbance will ride along this boundary bringing wintry precip from the south to the north beginning Friday morning. The track and intensity of this piece of energy is further south and east which means more snow than ice, but lower totals across the board. The biggest impacts for the Carolinas will be for the coast where freezing rain and sleet will cause major disruptions along the NC/SC coast where .25-.50″ of ice accumulation will be possible. The highest snowfall totals will be for Raleigh-Durham, but even then 2-5″ of snow seems a bit aggressive as well.
ENVIRONMENT・18 HOURS AGO
USA TODAY

People haven't just made the planet hotter. We've changed the way it rains.

A USA TODAY analysis of a century of precipitation data shows how, East of the Rockies, more rain is falling—and in more intense bursts.
ENVIRONMENT・1 HOUR AGO