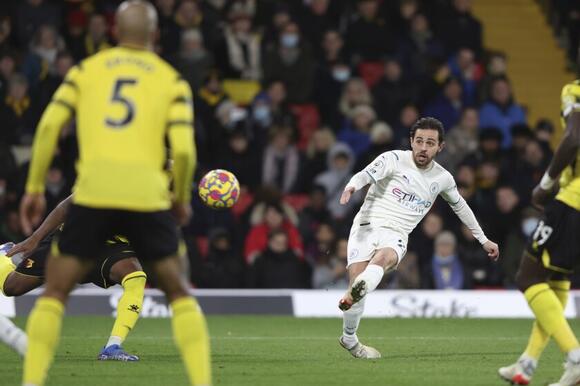 Defending champion Manchester City was on top of the English Premier League for the first time this season after a dominant 3-1 win at Watford on Saturday.

City is one point ahead of Liverpool and two in front of Chelsea after winning its last five league games.

Raheem Sterling put City ahead in just the fourth minute and Silva doubled the lead in the 31st by weaving past two defenders before slotting the ball past goalkeeper Daniel Bachmann.

City completely dominated the first half, with 81% possession, and could have added more goals before Silva got the third with a clever curled effort into the top corner in the 63rd.

Watford pulled one back through Cucho Hernandez, who followed up his own shot after it rebounded off a post, to deny Pep Guardiola’s side a ninth clean sheet of the season.

Burnley vs Watford clash given third date after being postponed twice

Burnley and Watford will hope it is third time lucky as their Premier League fixture has been rearranged for February 5 with a 6pm kick-off time.The fixture was postponed for a second time earlier this week. It was originally due to be played on December 15 but was called off due to Covid-19 cases within the Watford squad before an outbreak at Burnley forced the postponement of the rearranged match on January 18.But with both sides having already been knocked out of the FA Cup, it has been rescheduled for the weekend of the fourth-round fixtures.On Thursday, Watford boss Claudio...
PREMIER LEAGUE・5 HOURS AGO
The Guardian

Thomas Tuchel says Chelsea need to “recharge the batteries” after blaming tiredness for their lacklustre performance in the 1-1 Premier League draw at Brighton The European champions’ fading title hopes suffered another setback after Hakim Ziyech’s first-half opener was cancelled out by stand-in Albion skipper Adam Webster.Chelsea topped the table as recently as the start of last month but have spectacularly fallen out of contention having now won just two of their nine top-flight outings since.Blues boss Tuchel once again bemoaned his club’s punishing schedule and now plans to give his players two days off ahead of Sunday’s home game...
PREMIER LEAGUE・2 DAYS AGO

Liverpool are through to the Carabao Cup final after beating Arsenal 2-0 on the night and on aggregate.They will face Chelsea at Wembley, after a dominant showing in the semi-final second leg which saw the Gunners end with 10 men after a late Thomas Partey red card.Diogo Jota raced infield to strike home the game’s first goal from the edge of the box midway through the first half, and the Portuguese forward was the star of the show, lobbing in a second to send the Reds clear.Partey had been on the pitch fewer than 20 minutes when he picked up...
PREMIER LEAGUE・18 HOURS AGO
The Independent

Ralf Rangnick stood by his decision to substitute Cristiano Ronaldo despite the striker’s angry reaction during Manchester United’s 3-1 win at Brentford.Goals from Anthony Elanga, Mason Greenwood and Marcus Rashford boosted Manchester United’s top-four ambitions.But the spotlight was once again on Ronaldo, who was far from impressed when his number came up with 20 minutes left.The striker trudged off slowly before hurling his coat to the floor as he sat down muttering “why?”.However, United interim boss Rangnick said: “He was asking ‘why me’?. But I told him I take the decisions in the interest of the team.“We were 2-0 up...
PREMIER LEAGUE・1 DAY AGO
The Independent

Chelsea look to get back on track at Brighton after coming unstuck against a dominant Man City to all but end their Premier League title hopes.Brighton will be tough opposition and even snatched a point last month at Stamford Bridge thanks to Danny Welbeck. Graham Potter’s side also fought back last time out to draw at home to Crystal Palace, showing their mental resilience. This game is being played tonight due to the European champions’ commitment to play in the Club World Cup, shifting from the original 8 February date, a move that Thomas Tuchel is struggling to come to...
PREMIER LEAGUE・2 DAYS AGO
The Independent

Saturday, 3pm matches don’t always feature teams in the spotlight, those creating the biggest stories, so it’s a change of pace this weekend. Newcastle - and all the money and mayhem that comes with them right now - are in action at the same time as Manchester United host West Ham, both those sides fighting it out for a Champions League or Europa League spot.And so are Wolverhampton Wanderers.Bruno Lage’s side haven’t yet taken too much focus in the wider Premier League picture, but perhaps they are about to. They have won only one fewer than Man United, lost only...
PREMIER LEAGUE・9 HOURS AGO

Kepa Arrizabalaga admits Chelsea are starting to look over their shoulder in the battle for Champions League qualification after their slump continued with a 1-1 draw at Brighton.The third-placed Blues topped the Premier League table early last month but a dismal run of just two wins from nine top-flight outings since has left their title challenge in tatters.Pressure is growing on manager Thomas Tuchel with his side now 12 points adrift of leaders Manchester City, having also played a game more.In addition, London rivals Tottenham and Arsenal could soon start to threaten Chelsea’s position in the top four as they...
PREMIER LEAGUE・2 DAYS AGO
The Independent

Newcastle United have seen their initial bid to sign Jesse Lingard on loan from Manchester United rejected.Lingard, whose contract is set to expire at the end of the season, is one of several players at Old Trafford eager to find regular first-team football elsewhere.Newcastle are keen to make Lingard the third signing since the Saudi Arabia-led takeover, following the arrivals of Kieran Trippier and Chris Wood.Ralf Rangnick, United's interim manager, has admitted that his squad is too big to give regular opportunities to all of his players but is wary of the need for depth during a Covid-affected season.A loan...
PREMIER LEAGUE・1 DAY AGO
The Guardian

Norwich City have been dealt a blow in their Premier League survival battle with goalkeeper Tim Krul set for a spell on the sidelines because of a shoulder problem.Dutchman Krul suffered the injury late on during the victory over Everton on Saturday and Norwich are awaiting confirmation of how long he will be unavailable.“Tim Krul is out. He hurt his shoulder, the ACL joints, in the last minute of the Everton win,” said boss Dean Smith whose side travel to relegation rivals Watford on Friday night where Angus Gunn is expected to deputise in goal.“I am not sure on...
PREMIER LEAGUE・1 DAY AGO
The Independent

Tottenham Hotspur visit Leicester City tonight in a rescheduled Premier League match as both sides look to catch up on postponed fixtures. Both Spurs and Leicester have had four games called off this season, including this past weekend, and therefore have several matches in hand on the teams above them in the table. FOLLOW LIVE: Team news and all the action as Brentford host Manchester UnitedAntonio Conte’s Spurs sit four points off West Ham and the Champions League places, having played four games less than the Hammers, and would boost their top four bid with a victory tonight. Leicester, meanwhile,...
PREMIER LEAGUE・1 DAY AGO
The Independent

Steven Bergwijn was delighted to follow Antonio Conte’s instructions and deliver a dramatic stoppage-time win for Tottenham at Leicester.The Netherlands international scored twice in 79 seconds of time added on to turn Spurs’ 2-1 deficit into a memorable 3-2 victory.He was sent on in the 78th minute, two minutes after James Maddison had put the Foxes on course for the three points in their first Premier League game of 2022 with a clear instruction from Conte – to score.Bergwijn, who has been subject of a bid from Ajax in the January transfer window, duly obliged, firing home from close range...
PREMIER LEAGUE・1 DAY AGO
San Diego Union-Tribune

Last-gasp Leicester win worth so much more than three points to Spurs, says Pierre-Emile Hojbjerg

Tottenham midfielder Pierre-Emile Hojbjerg believes Wednesday’s last-gasp win at Leicester will give his side more than just three points.Spurs won a game they seemed destined to lose at the King Power Stadium as two Steven Bergwijn goals in 79 stoppage-time seconds turned a 2-1 deficit into a 3-2 lead.It extended their Premier League unbeaten run to nine games under Antonio Conte and put them firmly in the race for Champions League qualification.Hojbjerg believes the manner of victory could help propel his team on in the second half of the season.He said: “Obviously it is three points like any other game...
PREMIER LEAGUE・18 HOURS AGO
The Independent

It was honours even in the first leg of the Carabao Cup semi-final, with ten-man Arsenal clinging on to a 0-0 draw against Liverpool.Mikel Arteta’s side have since seen their Premier League encounter with Tottenham postponed due to a depleted squad, but are seemingly ready for the second leg at the Emirates Stadium.FOLLOW LIVE: Team news and all the action as Arsenal face Liverpool in the Carabao Cup semi-final second legWith Mohamed Salah and Sadio Mane away at the Africa Cup of Nations, Jurgen Klopp will hope an alternative forward-line can build on a dominant showing against Brentford.Chelsea are...
PREMIER LEAGUE・21 HOURS AGO
BBC

Manchester United recovered after being rescued by the heroics of goalkeeper David de Gea to run out comfortable winners at Brentford. Ralf Rangnick's side survived a torrid opening 45 minutes, when their performance was laced heavily with mediocrity - as De Gea made key saves from Mathias Jensen and the home side missed other big chances.
PREMIER LEAGUE・1 DAY AGO
The Independent

Brendan Rodgers hopes a fightback in the second half of the season will be the “story” that defines Leicester’s campaign this time round.For the last two seasons, the Foxes have looked like finishing fourth in the Premier League only to falter and miss out on qualification for the Champions League on the final day on each occasion.This time, Rodgers’ side are playing catch up. Leicester head into their home game against sixth-placed Tottenham on Wednesday night 10th in the table, but with as many as four games in hand on some teams above them due to coronavirus postponements.Should they...
PREMIER LEAGUE・2 DAYS AGO