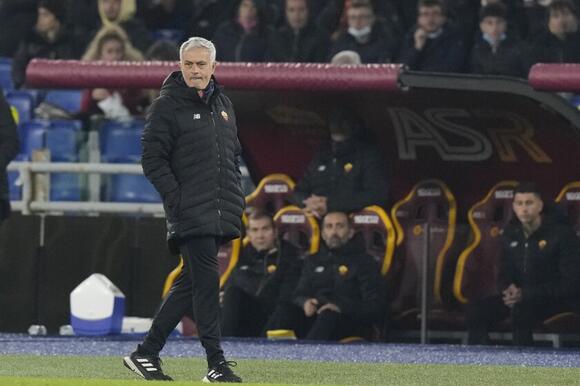 Roma coach José Mourinho had a nightmare match against his former team as the capital side lost 3-0 at home to Inter Milan in Serie A on Saturday.

Hakan Çalhanoğlu, former Roma forward Edin Džeko, and Denzel Dumfries scored in the first half. It was the first time in Mourinho’s career that one of his teams was 3-0 down at halftime.

Mourinho answered only one question from journalists in his news conference.

“I apologize again for not responding to other questions. I’m just going to say what I think," Mourinho said. "Inter is better than us on a good day, they finished with 29 points more than us last year and also this year they’re better.

"On a good day it would have been a difficult match, but today it was even harder because of absentees.”

Inter moved to second in Serie A, a point behind AC Milan after the Rossoneri beat Salernitana 2-0 to move to the top of the league. Napoli dropped to third, two points below Milan, after losing to fourth-placed Atalanta 3-2.

Mourinho steered Inter to the treble of Serie A, Italian Cup and Champions League success in 2010. He took over at Roma in the offseason but has had mixed results. Roma has lost four of its past six league matches.

Inter opened the scoring when Çalhanoğlu curled in directly from the corner flag. The lead was doubled in the 24th minute. Çalhanoğlu cut inside from the left and pulled the ball back for Džeko to sweep into the top left corner. Džeko didn’t celebrate against the club he left in the offseason.

The Nerazzurri had the result virtually wrapped up by halftime. Alessandro Bastoni whipped in a cross from the left for a diving header from Dumfries at the back post.

Two goals in the space of five minutes saw Atalanta recover from 2-1 down to win in Naples.

It was only Napoli's second league loss.

Ruslan Malinovskyi gave Atalanta an early lead but goals either side of halftime from Piotr Zieliński and Dries Mertens put Napoli ahead.

However, Merih Demiral fired Atalanta level in the 66th minute and Remo Freuler netted what was to prove the winner shortly after.

Duván Zapata had a header come off the post for Atalanta, which also had a penalty revoked on video review.

Milan dominated against bottom-placed Salernitana but lost another player to injury.

After Rossoneri defender Simon Kjær was ruled out for the rest of the season during the week, forward Pietro Pellegri came off early against Salernitana.

Milan was already 1-0 up by that point after Franck Kessié fired home after Rafael Leão cut the ball back from the byline in the fifth minute.

Alexis Saelemaekers doubled Milan’s lead in the 18th with a powerful strike. He celebrated by running to the touchline and holding up a shirt with Kjær’s name on it.

Robin Gosens is set to join Inter Milan after the Serie A leaders finally reached an transfer agreement with Atalanta Bergamo on Wednesday after recently agreeing to personal terms with the club. He'll join the Nerazzurri on an initial loan for the remainder of the season in a deal that comes with an obligation to buy this summer for €25 million (add-ons included). The 27-year-old, who has been sidelined since September with a thigh injury, is expected to undergo medicals on Thursday in Milan to complete his move.
SOCCER・2 DAYS AGO
Daily Mail

Roma surprise Jose Mourinho with a birthday cake and two bottles of champagne in the dressing room to celebrate manager turning 59... before the Special One blows out the candles and says 'let's get to work!'

Jose Mourinho was surprised with a birthday cake and two bottles of champagne at Roma's training ground after turning 59 on Wednesday. Mourinho has endured a difficult debut season with the Italian club so far, yet his players and staff still made sure to pay tribute to their manager on his birthday.
SOCCER・2 DAYS AGO
Tribal Football

AC Milan are hoping Zlatan Ibrahimovic and Franck Kessie can make the derby against Inter Milan next weekend. The derby will be held after the winter break on February 5. Ibrahimovic is recovering from lesions on his achilles suffered in the draw with Juventus. Kessie, meanwhile, suffered bruised ribs and...
SOCCER・2 DAYS AGO
Tribal Football

Roma manager Jose Mourinho still wants to sign Granit Xhaka before the January transfer window closes. Mourinho failed in his pursuit of the Arsenal midfielder last summer. Reports in Italy says the Portuguese has not given up on getting his man. However, Corriere dello Sportsays a player must depart first...
PREMIER LEAGUE・1 DAY AGO

Welcome to Serie A Star Power Index: A weekly gauge of the players who are most controlling the buzz around Italy. Inclusion on this list isn’t necessarily a good thing. It simply means you’re capturing the Serie A world’s attention. This is also not a ranking. The players listed are in no particular order as it pertains to the buzz they’re generating. You can watch Serie A’s top players all season long on Paramount+.
SOCCER・16 HOURS AGO
The Guardian