The cryptocurrency market had a rude awakening on Saturday as major cryptocurrencies fell over 20% briefly. As of 1:20 p.m. ET, every cryptocurrency with a market cap over $10 billion is down over the last 24 hours, apart from so-called stablecoins that track the U.S. dollar and other fiat currencies. 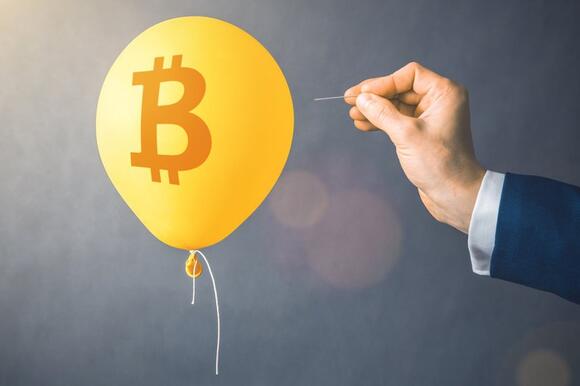 There are a few potential reasons for the rapid move, but when prices move this quickly at off-hours, the biggest driver is most likely nothing more than panic. According to Justin d'Anethan of crypto exchange EQONEX, as reported by Reuters , large holders have been moving cryptocurrencies from wallets to exchanges where they can more easily be sold. If big holders are selling and retail investors are highly leveraged in their cryptocurrency holdings a collapse in values can happen quickly .

Adding to the uncertainty is planned testimony before the U.S. House Financial Services Committee by executives from eight major firms, including Coinbase Global (NASDAQ: COIN) , on December 8. Congress is trying to determine how to regulate the crypto market and these executives are trying to guide that regulation without completely crushing their business models.

Broad selling of cryptocurrencies started about a month ago at the same time as growth stocks started to decline en masse . The potential for inflation, slowing job growth, and a flee to safety have all hurt both growth stocks and cryptocurrencies, which seem to be very correlated on the market. You can see below that the march lower has been steady and this chart doesn't even include the drop in the last few hours. 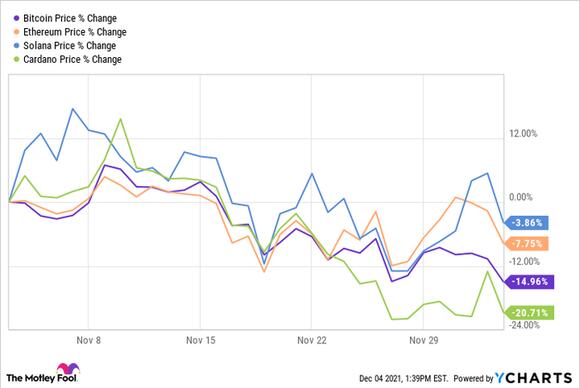 Volatility is normal in the cryptocurrency market but the last week has been extreme. Big investors appear to be cashing in gains from the last two years, and the increase in volatility appears concerning in relation to the short-term price action for cryptocurrencies.

At the same time, investment in crypto infrastructure companies and utilities has only increased over the last few months and years, so there are long-term positives for the industry. But it could take years for those businesses to mature.

I'm worried that new investors who haven't been through a market crash before have added too much leverage and aren't prepared for large drops in volatile assets like cryptocurrencies. That shock can cause panic and a downward spiral of selling. For at least a few hours early this weekend, that spiral took hold of the market. Given the recent trends, I worry that a long-term downward spiral might just be getting started.

Though there are a lot of ways to gain exposure to Bitcoin, these stocks may be the worst.
STOCKS・20 HOURS AGO
The Motley Fool

Investors should get familiar with this fast-growing blockchain.
MARKETS・14 HOURS AGO
The Motley Fool

These high-growth companies are leading players in their respective industries.
STOCKS・18 HOURS AGO
The Motley Fool

When Bitcoin falls so do Bitcoin miners.
MARKETS・11 HOURS AGO

The stock seems to be moving down with broader market sentiment.
STOCKS・14 HOURS AGO
The Motley Fool

The iBuyer has fallen out of favor with investors, but could it be a long-term opportunity?
STOCKS・15 HOURS AGO
The Motley Fool

The tech sector may be down right now, but it's still bursting with opportunity for long-term investors.
STOCKS・20 HOURS AGO
The Motley Fool

Why Cryptocurrencies Like Avalanche, Terra, Polygon, and Algorand Are Crashing Today

The selling continues -- is there an end in sight for these top cryptos?
STOCKS・12 HOURS AGO

Unfortunately, any sort of bullish catalyst doesn't matter as much as it normally would.
STOCKS・11 HOURS AGO
The Motley Fool

Bitcoin has had a difficult start to 2022. The top cryptocurrency fell below the $33,000 mark on Monday to its lowest point since July, before regaining some losses later in the day. Still, the digital asset is down about 22% year to date, and roughly 40% below its all-time high...
STOCKS・11 HOURS AGO
The Motley Fool

Why Are Affirm, Upstart, and SoFi Plunging on Monday?

These fintech disruptors have had a rough start to 2022, and it's not changing yet.
STOCKS・15 HOURS AGO

Why Bitcoin- And Ethereum-Related Stocks Are Falling Today

Cryptocurrency-related stocks including Coinbase Global Inc (NASDAQ:COIN), Marathon Digital Holdings Inc (NASDAQ:MARA) and Riot Blockchain Inc (NASDAQ:RIOT) are trading lower Monday morning amid a weekend decline in the price of Bitcoin (CRYPTO: BTC) and Ethereum (CRYPTO: ETH). The cryptocurrency market has lost about $130 billion in value over a 24-hour...
STOCKS・17 HOURS AGO
The Motley Fool

Those institutions are two of the only banks that have created real-time payment systems to better facilitate cryptocurrency trading.
MARKETS・17 HOURS AGO
The Motley Fool

Crypto-related stocks seem to be getting hit along with the broader market.
STOCKS・13 HOURS AGO
The Motley Fool

Cryptocurrency traders have been suffering a slow painful death after the Fed ran out of excuses in tackling inflation. In just a few months, Wall Street had to reprice a much more aggressive Fed tightening strategy that made Bitcoin go from having a simple correction, to entering bear market territory, and now has fallen over 50% from its record highs.
STOCKS・1 DAY AGO
The Motley Fool

Despite recent challenges, Ethereum and Cardano look poised to outperform over the long term.
BUSINESS・1 DAY AGO
The Motley Fool

Is staking worth it for the average investor?
STOCKS・1 DAY AGO