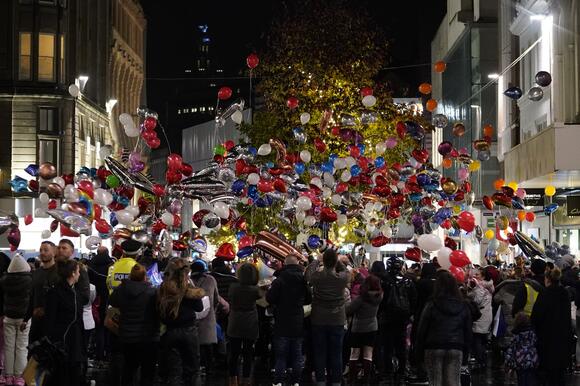 Hundreds of people have turned out to pay their respects to 12-year-old Ava White at a vigil held in her memory.

Ava was fatally stabbed in the city centre on November 25 after a Christmas lights switch-on.

On Saturday, family, friends and others gathered in Church Street, close to where the incident happened, to pay tribute to her. Hundreds of balloons, some in the shape of the letter A, were released at the start of the vigil.

Many people wore hoodies with Ava’s face on and others had her name written on their faces.

The Radio City tower was lit up blue in memory of the Year 8 Notre Dame Catholic College pupil.

Imagine by John Lennon was performed by Astrid Smith as hundreds held up glowsticks and phones to light up the city centre in Ava’s memory.

You’ll Never Walk Alone was played as was music including Hero by Mariah Carey and Where Is The Love by the Black Eyed Peas.

A number of the crowd were in tears during the vigil. On Friday, a statement on the Facebook page of vigil organisers A&E Entertainment said: “Tomorrow we will all come together as one, standing up against knife crime and standing strong for the family of a beautiful life lost.

“We stand together as we light Liverpool up for a beautiful little soul Ava White.”

Ava was taken to Alder Hey Children’s Hospital after the attack at about 8.30pm but later died from “catastrophic injuries”, police said.

A 14-year-old boy appeared in court earlier this week charged with her murder.

A mother and son have been jailed for killing a 17-year-old boy in a “shocking” machete attack sparked by petty gang rivalry.Levi Ernest-Morrison was chased and fatally stabbed in Sydenham, south London on the evening of April 10 last year.Mother-of-three Nichola Leighton, 37, who drove his killers to and from the scene in her red Suzuki jeep, was found guilty of his murder.On Friday, the former care manager was jailed at the Old Bailey for life with a minimum term of 23 years.Her 19-year-old son Tyreese Ulysses, from Catford who suffers from paranoid schizophrenia and was driven by...
PUBLIC SAFETY・20 HOURS AGO
ABCNY

A baby girl shot in the face by a stray bullet in the Bronx turned 1 Friday, and loved ones are being joined by anti-gun violence activists at a vigil in her honor.
BRONX, NY・7 DAYS AGO
NBC Connecticut

Mothers United Against Violence led a prayer vigil for 22-year-old Kendall Fair Saturday afternoon. The man, from West Hartford, was killed on Tuesday in a shootout in Hartford that happened at the intersection of Mather Street and Albany Avenue. Two other men were also shot and are expected to be...
HARTFORD, CT・6 DAYS AGO
PIX11

EAST HARLEM, Manhattan (PIX11) — The family of Kristal Bayron-Nieves held a vigil Saturday night, one day after the suspect who killed the 19-year-old woman was arrested. Several family members, including her mother, were so overcome with grief they could barely speak. She turned to speak to the media, with tears flowing freely. “I just […]
MANHATTAN, NY・13 DAYS AGO

The family of a young girl shot and killed over the weekend gathered Tuesday to remember and celebrate her life.
MILWAUKEE, WI・10 DAYS AGO
The Tab

A vigil was held for Ashling Murphy on the 16th January at 1pm in Bute Park. The event began with a walk from the Royal Welsh College of Music and Drama to a tree near the Secret Garden Cafe where the vigil took place. Murphy, a 23-year-old primary school teacher...
PUBLIC SAFETY・10 DAYS AGO
YourErie

It was another familiar scene in the 700 block of East 25th Street on January 26th where a vigil was held for 25-year-old Omar McNair. The Benedictine Sisters of Erie, Sisters of Saint Joseph, and Sisters of Mercy lead in prayers to reclaim the spot where McNair was killed. On December 3rd, 2021, McNair was […]
ERIE, PA・2 DAYS AGO
Post Register

BOISE, Idaho (CBS2) — A vigil was held Sunday in Boise near where 22-year-old Matt Cueller was shot and mortally wounded. Family and friends gathered, leaving candles, flowers and balloons, all in remembrance of Matt. He passed away after getting shot last Saturday in a Boise vista neighborhood at a get-together.
BOISE, ID・4 DAYS AGO

Dozens gathered together at the Utah Valley University Thursday night to remember Izzy Tichenor. Her family claims racial discrimination and mental health harassment drove the North Salt Lake ten-year-old to take her own life back in the fall.
NORTH SALT LAKE, UT・1 DAY AGO
KVUE

AUSTIN, Texas — The Austin community gathered for a vigil in Central Austin on Wednesday night at the office where a beloved doctor was killed one year ago to the day. On Jan. 26, 2021, two doctors died following a reported hostage situation at an Austin pediatrician's office that lasted about six hours. According to police, Dr. Bharat Narumanchi held five hostages, including Dr. Katherine Lindley Dodson. Several hostages were able to escape and others were later allowed to leave, leaving Dodson as the sole hostage.
AUSTIN, TX・2 DAYS AGO
Daily Mail

Grandmother, 49, is arrested and sectioned under the Mental Health Act after her five-year-old grandson was stabbed to death as his parents pay tribute to the 'most beautiful child in the world'

The grandmother of a five-year-old boy who was stabbed to death has been sectioned under the Mental Health Act - as the child's devastated parents paid tribute to him. David-Mario Lazar, known to his family and friends as Mario, was found with severe injuries on Poplar Road, in Earlsdon, Coventry on January 25.
HEALTH SERVICES・1 DAY AGO
whmi.com

(LOS ANGELES) -- Los Angeles community members gathered for a vigil outside the furniture store where a 24-year-old employee was killed in the middle of the afternoon. Brianna Kupfer was attacked with a knife while she worked alone at the store on Jan. 13. Kupfer had texted a friend that afternoon saying someone in the store was giving her a "bad vibe," Los Angeles Police Department Lt. John Radke said at a Tuesday news conference.
LOS ANGELES, CA・8 DAYS AGO

A mother in Colorado charged with murder after pretending for years that her daughter was terminally ill has pleaded guilty to lesser charges in the 7-year-old’s death.Kelly Turner, 43, entered the plea on Monday in connection with the 2017 death of her daughter, Olivia Gant, who prosecutors say was subjected to unnecessary and life-threatening procedures as a result of her mother’s lies. She died in hospice.Ms Turner wept as she pleaded guilty to child abuse that negligently caused her daughter’s death, the Denver Post reported – in addition to two theft charges. She is next due in court on...
PUBLIC SAFETY・24 DAYS AGO
Fox News

Fremont, California, residents on Friday remembered Michelle Go, who was pushed in front of an oncoming subway train in New York City last weekend, at a vigil organized in her hometown. Go, a 40-year-old Asian-American woman, was standing on the platform inside the Times Square subway station on the morning...
FREMONT, CA・6 DAYS AGO
People

At just 16, Anjum Coffland's twin daughters, Brittany and Tiffany, had their career paths already mapped out. A cheerleader and gymnast, Brittany wanted to work in hospitality — a natural choice for her outgoing, gregarious daughter, says Anjum, 51, of St. Charles, Ill. "She was a mini-me," Anjum tells...
SAINT CHARLES, IL・2 DAYS AGO
The Guardian

Of six people recently killed in “execution style” shootings in a Milwaukee home, three were reportedly set to testify in an upcoming murder trial, according to police. The bodies were found on Sunday afternoon. According to police, officers were called to perform a wellness check on the house. When they entered, they found the bodies of Caleb Jordan, 23; Javoni Liddell, 31; Charles Hardy, 42; Donald Smith, 43; Donta Williams, 44; and Michelle Williams, 49. It is not immediately clear how long the individuals were dead before they were found. Three of the individuals – not named by police...
PUBLIC SAFETY・17 HOURS AGO
The Independent

A violent ex-partner was “on autopilot” when he stabbed a mother and her young autistic son to death in front of a distressed baby, a court was told.Daniel Boulton is alleged to have travelled 28 miles on foot to knife his former girlfriend Bethany Vincent and her nine-year-old son Darren Henson “numerous times” at around 8pm on May 31 2021.His trial was told he developed a “hatred” for Darren and walked from his address in Skegness to Ms Vincent’s home in High Holme Road, Louth Lincolnshire where he “loitered for hours”.The ferocity of the attack, to me, indicates...
PUBLIC SAFETY・2 DAYS AGO
The Guardian

Coventry police continue to hold woman, 49, after death of five-year-old