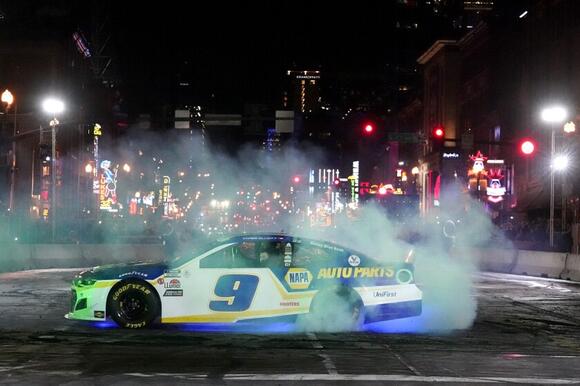 It capped an energized week in NASCAR's new favorite party city, which hosted the season-ending awards celebration for a second time. New national champions Kyle Larson, Daniel Hemric and Ben Rhodes were honored, the stars of the sport did burnouts on Lower Broadway, Chase Elliott made a bold fashion choice while picking up his fourth consecutive most popular driver award and plenty of business deals were closed.

It was a run-of-show similar to pre-pandemic celebrations in Las Vegas and New York, albeit scaled down in size as well as formality. Although Larson and Hemric opted for velvet tuxedo jackets, Elliott turned heads with a navy wide-brimmed bolero.

His look drew mixed reviews, even in the Music City, but Elliott dismissed criticism.

“I like it, it's my head, and I guess at the end of the day, that's about all that matters,” said Elliott, who revealed he got the headpiece “at the hat store.”

“I thought for sure someone else would have a hat on here, but they didn’t," Elliott said. “So I was the solo guy with the hat, but that’s fine, I like it. It’s a nice navy hat.”

The only other candidate Elliott could have counted on to be in a hat would have been Hall of Famer Richard Petty, who is never seen without his trademark Charlie 1 Horse Hat called “The King” that is custom-made in Garland, Texas, for the seven-time champion. But Petty didn't make the trip to Nashville, where it was announced GMS Racing had purchased a majority stake in Richard Petty Motorsports.

Petty's role with the race team has been as a figurehead for years, so Maury Gallagher of GMS actually bought out Medallion Financial Corp. The company run by Andrew Murstein has been the primary owner of RPM since 2011 and an SEC filing showed that Gallagher paid $19.1 million for Medallion's majority stake.

Additional details of the acquisition are scheduled to be revealed next week, including what role, if any, Petty will have with the team. GMS said in October it will field a Cup car for Ty Dillon next year.

The GMS and RPM transaction pushed Denny Hamlin to divulge that 23XI Racing paid $13.5 million to StarCom Racing to acquire the charter the team needs next season for Kurt Busch. Hamlin, who paid only $4 million a year earlier to launch his race team around Bubba Wallace, had previously insisted he wouldn't spend anything north of $10 million on a second charter.

But the charter market exploded this year into a frustrating bidding war and 23XI opted to finally pay the inflated entrance price — it's gone up about 500% in a little over a year — that guarantees a car a spot in the field each week.

“All it did was tell me that my investment of $4 million last year was a good investment,” Hamlin said. “Not ideal, but we plan on being in this sport for a long time and we're all placing a bet. Hopefully our chips don't get taken off the table.”

New sponsorship deals were announced — Elliott got a three-year extension from Hooters that runs through 2024 even though his driver deal with Hendrick Motorsports expires at the end of 2022 — and Trackhouse Racing took a huge step in its goal of becoming Nashville's NASCAR team.

Justin Marks, co-owner of Trackhouse along with entertainer Pitbull, already lives in Nashville and wants to relocate the team to the downtown entertainment district. Tootsie’s World-Famous Orchid Lounge announced a six-race primary sponsorship deal with Trackhouse that begins at the Daytona 500 on the Chevrolet driven by Daniel Suárez.

Tootsies, Opry Entertainment’s “Ole Red” brand and the Nashville Convention and Visitor’s Corp. will also be featured on the car to promote Nashville’s hospitality and tourism industry.

“Nashville is such a fun city and it will be an honor to spread the word across the country," Suárez said.

The most touching part of the celebration came at the end of Larson's speech accepting his first Cup championship. He won his first title in his first season driving for Hendrick Motorsports, the team that gave him a second chance following a nearly yearlong suspension for using a racial slur.

Larson had been given his first shot in NASCAR by Chip Ganassi, and the owner had no choice but to fire Larson in early 2020 when nearly every sponsor dropped him. The driver made sure not to forget the opportunity he was given when no other NASCAR owner was interested in signing an 18-year-old dirt racer. He referred to Ganassi as “one of the greatest team owners in the world” in his speech.

“He's done a lot for me, he's probably the main reason I'm sitting here right now,” Larson said when asked why he closed his speech with a tribute to Ganassi.

“He took a shot on me and things that didn't end the way that I ever dreamed of with him and his team. We didn't get a proper closure there at Ganassi and I just wanted to give a proper thanks to him and wish him a successful future.”

Earnhardt Jr. matches his father as NASCAR Hall of Famer

CHARLOTTE, N.C. — (AP) — Dale Earnhardt Jr. was voted NASCAR’s most popular driver a record 15 times. He didn’t forget “Junior Nation” on his way into the Hall of Fame. “When I stumbled, you guys were right there ready to lift me back...
MOTORSPORTS・30 MINUTES AGO
The Daily South

Bojangles is celebrating Dale Earnhardt Jr.'s impending induction into the NASCAR Hall of Fame by giving away the racing legend's favorite fixin'—Dirty Rice—for free!. That's right y'all. From Thursday, January 20, through Sunday, January 23, customers can cash in by placing an order through the all-new Bojangles App. Simply add an individual Dirty Rice to your cart and use the code "DALE" to receive the fan-favorite fixin' for free.
MOTORSPORTS・2 DAYS AGO
San Diego Union-Tribune

Dale Earnhardt Jr., who said he once thought he was destined only to be a mechanic at a car dealership, joined his father in the NASCAR Hall of Fame on Friday night. “Nothing that racing has given me will ever top this night,” Earnhardt said at the end of his speech. “The people enshrined in this building, they’re my role models and my heroes and one of them happens to be my father, so to join dad in the Hall of Fame is probably as good as it’s going to get.”
MOTORSPORTS・44 MINUTES AGO
995qyk.com

When it snows in Nashville, it is a rare thing and a big deal to residents including Kelsea Ballerini, who had a blast when it snowed this weekend (1/16). Kelsea posted a bunch of photos of her Sunday including a photo of her sitting in the snow, her snow-covered dog Dibs, she and her husband Morgan Evans building a snowman, and the warm food she was preparing. She captioned the post simply, “THE COZIEST DAY. 🌨.”
NASHVILLE, TN・3 DAYS AGO
Sportsnaut

Greatest drivers in the history of the Daytona 500

After more than two years of speculation, could the 2022 NASCAR Cup Series season finally mark the entry of Floyd Mayweather Jr.?. A year after the NASCAR Cup Series saw the addition of both Pitbull (Trackhouse Racing Team) and Michael Jordan (23XI Racing) as celebrity team owners, we could finally see legendary boxer Floyd Mayweather Jr. enter the sport in a similar capacity.
MOTORSPORTS・14 HOURS AGO

The best NASCAR races ever: From the Daytona 500 to Talladega 500

NASCAR has seen some tremendous races in its existence, but some races trump the rest in terms of greatness. Here is a list of the best NASCAR races ever.
NFL・6 HOURS AGO
USA TODAY

Ranking Dale Earnhardt Jr.'s most memorable wins ahead of his NASCAR Hall of Fame induction

Dale Earnhardt Jr., who won 26 career races during a 19-year Cup career, will be inducted into the NASCAR Hall of Fame Friday night.
MOTORSPORTS・15 HOURS AGO