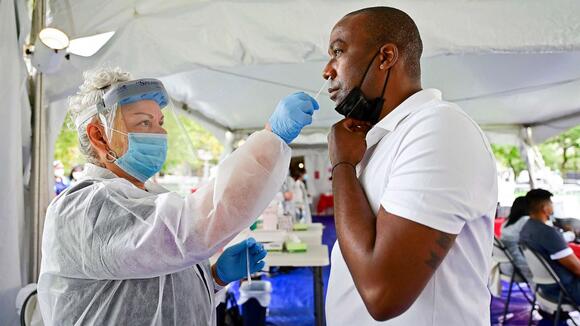 Omicron has been making headlines as cases of the new COVID-19 variant continue to be detected in the United States. While the strain is concerning, health officials are heeding that delta continues to fuel widespread transmission and is a problem now .

That's the current case in Pennsylvania, where the number of daily confirmed COVID-19 infections crossed 10,000 Friday for the first time since the state's winter wave.

In the past week, the number of COVID-19 cases, case rates, hospitalizations and patients on ventilators have all gone up, according to state data . Amid its latest surge, Pennsylvania has one of the highest COVID-19 hospitalization rates in the U.S.

One month ago, there were about 250 COVID-19 patients total being treated across the six hospitals; on Friday, that number was 310, Curley said. The peak, during last year's winter surge, was around 430, he said.

The University of Pittsburgh Medical Center, which operates over 35 hospitals throughout Pennsylvania, has seen its second-highest number of COVID-19 patients since the pandemic began, hospital officials said. As of Friday morning, there were 779 patients with active COVID-19 infections admitted across all UPMC facilities; the peak, in December 2020, was 1,250, UPMC Chief Medical Officer Dr. Donald Yealy told ABC News.

"Across our system, we're at about two-thirds to three-quarters of what that peak is," he said. "So it is very, very brisk."

The state's current surge has been building since late summer, Yealy said. It reached a peak in late September before "there was the beginning of a pullback in activity," Yealy said.

"That pullback no longer exists and we are back on essentially an upward trajectory," he continued.

It's hard to predict if Thanksgiving gatherings will have an impact on hospitalizations; holidays are a "wild card," Curley said. But many people in the state have no protection against COVID-19, Yealy noted, which will help fuel transmission.

Statewide, around 41% of residents have still not gotten fully vaccinated, according to federal data. Within some counties, that percentage is in the 60s, state data shows.

Unvaccinated people continue to represent the vast majority of hospitalized COVID-19 patients, including those who are in intensive care units, state and hospital data shows.

For the 30 days ending Nov. 2, nearly 75% of people hospitalized due to COVID-19 were unvaccinated, according to state data.

MORE: Why are coronavirus cases and hospitalizations on the rise in the US?

Across WellSpan's six acute-care hospitals, over 90% of COVID-19 patients in the ICU and on ventilators since early September have been unvaccinated, the health system said this week.

"Those numbers just reinforce what we already know -- is these vaccinations are safe and effective," Curley said.

Pennsylvania Gov. Tom Wolf has urged people to get vaccinated if they haven't already.

"In Pennsylvania and around the country, the vaccine is still our strategy, so get your shot," the governor said last week on KDKA-AM radio, according to The Associated Press.

A renewed push for vaccination and boosters has come amid the spread of omicron, which has concerned scientists due to its large number of mutations. The variant has been detected in at least 11 states -- including Pennsylvania, where the state's first case was identified Friday in a man from northwest Philadelphia, health officials said.

For Curley, if concerns around the omicron variant encourage people to get vaccinated, that's a good thing. But he warned that delta "is here now."

MORE: What is known about the omicron variant that's arrived in the US

Rochelle Walensky, director of the Centers for Disease Control and Prevention, echoed that sentiment on Friday in an interview on CNN .

"We now have about 86,000 cases of COVID right now in the United States being diagnosed daily and 99.9% of them , the vast majority of them, continue to be delta," she said. "And we know what we need to do against delta. And that is get vaccinated. Get boosted if you're eligible and continue all of those prevention measures, including masking."

It is too soon to tell if omicron will overtake delta as the predominant variant in the U.S., she said. Though either way, the actions will likely remain the same, experts say.

"The truth of the matter is, both delta, which is the predominant variant now, and omicron are easily transmitted. And so the concerns are really not changed all that much, and the actions that we all need to take remain exactly the same," Yealy said. "Get vaccinated, wear a mask indoors and in crowds, keep a little distance and if you get sick, don't go out with others and get tested as quickly as possible."

WASHINGTON (AP) — Russian President Vladimir Putin appears to be preparing to launch an invasion of Ukraine, with more than 100,000 troops positioned around the country. Certainly, the U.S. believes that’s the case and President Joe Biden has warned Ukrainian President Volodymyr Zelenskyy that an attack could come in February.
POLITICS・3 HOURS AGO
CBS News

A bridge collapsed in Pittsburgh shortly before President Biden was set to travel there to tout his infrastructure law. No one was killed. CBS Pittsburgh's Ken Rice has the latest.
PITTSBURGH, PA・9 HOURS AGO
The Associated Press

WASHINGTON (AP) — The House committee investigating the U.S. Capitol insurrection subpoenaed more than a dozen individuals Friday who it says falsely tried to declare Donald Trump the winner of the 2020 election in seven swing states. The panel is demanding information and testimony from 14 people who it...
PRESIDENTIAL ELECTION・11 HOURS AGO
CNN

(CNN) — A Pennsylvania appellate court on Friday struck down a law that allows no-excuse absentee voting, saying it violates the state constitution. The law, known as Act 77, was enacted in late 2019 with strong bipartisan support. But in September, more than a dozen Republicans in the state House -- most of whom voted for the law -- filed suit, asserting that the changes made to absentee voting were unconstitutional and should have been pursued through a constitutional amendment placed before voters.
PENNSYLVANIA STATE・13 HOURS AGO

The AR-15-style rifle that Kyle Rittenhouse used in the shooting of three men during a 2020 protest in Kenosha, Wisconsin, will be destroyed.
KENOSHA, WI・11 HOURS AGO
CBS News

South Carolina federal judge Michelle Childs is under consideration to succeed retiring Justice Stephen Breyer on the U.S. Supreme Court, the White House confirmed late Friday. Childs, 55, is based in Columbia, South Carolina, and was nominated last year by President Biden to serve on the U.S. Court of Appeals...
COLUMBIA, SC・7 HOURS AGO
The Associated Press

Neil Young is knocking Spotify after it sided with Joe Rogan and pulled his music from their service after he gave it an ultimatum on coronavirus misinformation, saying he sounds "better everywhere else" anyway. "I have never been in favor of censorship,” the “Rockin’ in the Free World” songwriter said...
MUSIC・11 HOURS AGO

(NewsNation Now) — Two Houston police officers were released from the hospital Friday following a police chase that ended in a shootout and an hourslong standoff with a barricaded suspect. The situation began about 2:40 p.m. on Thursday as officers responded to a family disturbance call at a home...
HOUSTON, TX・8 HOURS AGO
ABC News