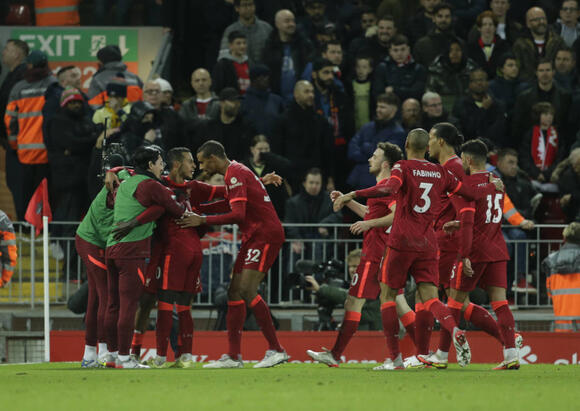 Liverpool face Bruno Lage's Wolves on Saturday in the Premier League and LFC Transfer Room can now bring you the confirmed line ups.

The match will be played at Molineux and the game will kick-off at 15:00GMT.

After a fine win on Wednesday against Everton in the Merseyside derby it's important that Jurgen Klopp's team continue their winning run to keep the pressure up on rivals Chelsea and Manchester City.

Wolves have started well under Lage and will be keen to build on a very solid start to the season that has seen them on 21 points from 14 matches.

Here are the lineups:

Watch: Should Joe Gomez Be Sold By Liverpool?

Liverpool name an unchanged team retaining the starting XI from the brilliant 4-1 victory over Everton at Goodison Park on Wednesday.

Joe Gomez and Naby Keita returned to training on Thursday and should be available for the midweek trip to Milan in the Champions League but do not take part today.

Roberto Firmino, Curtis Jones and Harvey Elliott are all still missing through injury.

Liverpool striker Mohamed Salah was on target as Egypt edged past Guinea-Bissau at the Africa Cup Of Nations and you can watch the goal here. The strike came in the 69th minute and was enough to help Egypt secure the three points leaving them second in Group B. Salah was...
FIFA・19 HOURS AGO
LFCTransferRoom

After a frustrating night at Anfield on Thursday which saw Liverpool fail to break down ten man Arsenal, manager Jurgen Klopp was asked about the absence of Mohamed Salah, Sadio Mane and Naby Keita who are at the Africa Cup of Nations. As reported by liverpoolfc.com, Klopp made it clear...
PREMIER LEAGUE・2 DAYS AGO
LFCTransferRoom

The first leg of the Carabao Cup concluded in a stalemate as Liverpool were unable to score against a resilient 10-man Arsenal team. There were some noticeable issues amongst the Liverpool team during the game which impacted the overall performance. 1. Liverpool desperately missed Mohamed Salah and Sadio Mane. Takumi...
PREMIER LEAGUE・2 DAYS AGO
The Guardian

Minute-by-minute report: Kevin De Bruyne’s sumptuous second-half strike sealed a huge win for the champions as they look to retain their title. Scott Murray was watching.
PREMIER LEAGUE・1 DAY AGO

Liverpool forward Divock Origi has decided he wants to leave Liverpool this January, and he has been offered to Serie A Champions Inter Milan, according to reports. The Belgian - who has scored five goals in all competitions for the Reds this season - has been linked with moves away for several seasons, and this looks to be the window he is offloaded due to his contract situation.
PREMIER LEAGUE・2 DAYS AGO
BBC

With Mohamed Salah and Sadio Mane away at the Africa Cup of Nations, Liverpool drew a blank against Arsenal in the Carabao Cup on Thursday, but will things be different against Brentford on Sunday?. "They are not the same threat without those two, but the goals will come from somewhere,"...
PREMIER LEAGUE・2 DAYS AGO
90min.com

Liverpool host Brentford in the Premier League as the Reds look to strengthen their Premier League title bid. Jurgen Klopp's side currently trail leaders Man City by 11 points with a game in hand heading into this weekend after a brief wobble. The Reds have won just once in normal...
PREMIER LEAGUE・2 DAYS AGO
The Guardian

Liverpool manager Jurgen Klopp has admitted sitting down with Curtis Jones last week to talk about the next steps in his progression. As reported by The Mirror, the German is keen to see the talented 20 year old fulfil his potential but felt the need to talk it through with the player.
LIVERPOOL, NY・18 HOURS AGO
The Independent

You would think that after signing the Champions League’s all-time leading goalscorer, a four-time winner with Real Madrid and a 21-year-old prodigy who has played in its knockout stages twice already, Manchester United would be well on their way to achieving a top-four finish by now. If only it were so simple.This season was supposed to see the first serious title challenge at Old Trafford. It has instead resulted in Ole Gunnar Solskjaer’s departure, a bloated and unsettled squad, and the appointment of an interim manager who now has about four months to turn results around and meet the minimum...
PREMIER LEAGUE・2 DAYS AGO
LFCTransferRoom

Liverpool v Brentford live stream: How to watch the Premier League from anywhere in the world

Liverpool v Brentford live stream, Sunday 16 January, 2.00pm GMT. Struggling Liverpool welcome Brentford to Anfield on Sunday in a must-win clash for their Premier League title hopes. The Reds began the weekend in third, one point behind Chelsea and 11 adrift of runaway leaders Manchester City, but with a...
PREMIER LEAGUE・16 HOURS AGO
LFCTransferRoom

Opinion: Liverpool Should Have Re-signed Coutinho!

Philippe Coutinho left Liverpool to join Barcelona in 2018, for what was at the time the second most expensive transfer ever - £142million. However, his time in Spain has been frustrating. Despite having moments of magic, he has become a seemingly unwanted figure at the Spanish giants, as loan spells to Bayern Munich and now Aston Villa have shown.
PREMIER LEAGUE・1 DAY AGO
LFCTransferRoom

An enthralling encounter at Villa Park ended 2-2 between Aston Villa and Manchester United, and you can watch the match highlights here. The Red Devils took a two goal lead through a Bruno Fernandes double before Jacob Ramsey pulled one back for Villa with 13 minutes left. Substitute Philippe Coutinho...
PREMIER LEAGUE・1 DAY AGO
LFCTransferRoom

Ahead of the Premier League clash against Brentford at Anfield on Sunday, Liverpool manager Jurgen Klopp has been speaking to the media and provided an update on the fitness of Divock Origi. The 26 year old has been missing since scoring two winning goals in a week against Wolves and...
LIVERPOOL, NY・2 DAYS AGO
LFCTransferRoom

Manchester City have had a great season so far but there have been claims from some fans and players about them being 'lucky' with COVID and injuries. As of writing this article, Pep Guardiola's Manchester City side are 10 points clear of 2nd place Chelsea and 11 points clear of 3rd place Liverpool.
PREMIER LEAGUE・1 DAY AGO
LFCTransferRoom

Kalvin Phillips has had a stellar couple of seasons for Leeds United. He has been their midfield mainstay and made his way into the English national side. Given the situation with injuries, AFCON, and the Covid-19 outbreak, it makes sense that Liverpool dip into the market to ensure that they have enough options to catch Manchester City.
PREMIER LEAGUE・2 DAYS AGO
LFCTransferRoom

Liverpool midfielder Fabinho has been speaking to liverpoolfc.com about the importance of the return of his Brazilian teammate Roberto Firmino. The number nine has had an interrupted season so far through injury and more recently Covid-19 but returned to the squad last weekend to score an audacious goal in the 4-1 FA Cup victory against Shrewsbury.
LIVERPOOL, NY・1 DAY AGO