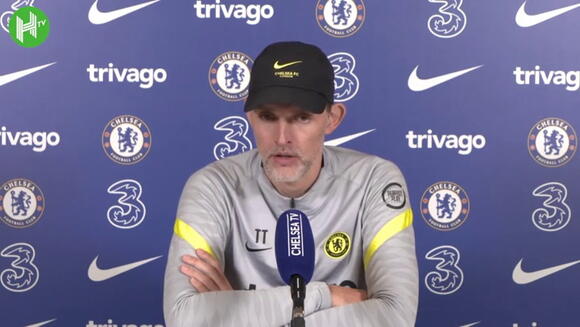 Premier League leaders Chelsea head east today visiting high-flying West Ham United in a tricky-looking fixture. The Blues are without several first-team options due to injury and hold just a one-point lead at the top of the table, making every game a must-win encounter for them if they want to end a five-year wait for the title. The Hammers are fourth, but a recent drop-off has seen them take just one point from the last three matches since the international break.

Manager David Moyes thinks it’ll click soon isn’t overly concerned at recent defeats as he wants the team to test themselves against the best . “We’re playing the Champions League winners. Last week we played the Champions League finalists as well. I said a few weeks ago, I really want us to play the best teams and see how we do and see where we are at, it is the only way to find out,” he said.

Thomas Tuchel expects a couple of players to return after injury for this fixture and noted that on-loan midfielder Saul could feature at wing-back in the coming weeks, having struggled to get game time in the middle of the park this season. Follow all the latest team news and match updates below:

Manchester United's struggling form continued on Saturday with a shockingly inconsistent display against Aston Villa without Cristiano Ronaldo. The Red Devils, up 2-0 through two Bruno Fernandes goals, conceded twice in five second-half minutes to settle for a 2-2 draw that leaves them five points back of the top four and with just one win in their last four matches.
PREMIER LEAGUE・2 DAYS AGO
The Independent

It was a not just victory but vindication; not just a vital three points for Leeds but for all the teams and supporters left embittered by the opportune postponement of the north London derby. After Marcelo Bielsa’s injury-ravaged squad pulled off a battling, breathtaking 3-2 victory over a weary West Ham on Sunday, the prevailing sentiment was that justice had been done and that the nature of Leeds’ performance showed the virtues of playing on. In the immediate aftermath, perhaps that was right too. While Arsenal’s predicament has been to some degree self-inflicted, Leeds’ list of casualties this season has...
PREMIER LEAGUE・2 DAYS AGO
The Independent

Arsenal are optimistic their Carabao Cup semi-final second leg against Liverpool will go ahead as planned on Thursday night.The Gunners successfully appealed to the Premier League to have Sunday’s north London derby away to Tottenham called off in the absence of a number of players.Injuries, suspension, coronavirus cases and losing players to the Africa Cup of Nations saw Mikel Arteta’s ranks depleted enough for the league to postpone their scheduled fixture.However, the PA news agency understands there have been no additional Covid-19 cases in the past two days and a couple of players are now likely to be fit following...
PREMIER LEAGUE・1 DAY AGO

Robert Lewandowski took home his second straight award, but one star competitor left him off the ballot completely.
UEFA・1 DAY AGO
The Independent

What the papers sayDonny van de Beek has rejected his reported loan deal to Newcastle from Manchester United, according to the Telegraph. The 24-year-old midfielder had been in the sights of the Magpies as they battle against relegation, but the club’s unstable position was also said to be what caused Van de Beek to turn the deal down.Newcastle have struggled with other transfer prospects too but, according to the Daily Express, the club is optimistic a deal for Sevilla defender Diego Carlos can be closed this week. The 28-year-old Brazilian reportedly wants to move to the Premier League and seems...
PREMIER LEAGUE・2 DAYS AGO
San Diego Union-Tribune

Ralf Rangnick has no concerns about selecting Paul Pogba during the final months of his Manchester United contract, even if the midfielder’s only motivation to play well is to earn a deal at another club.Pogba has entered the final six month of his current Old Trafford terms, with little progress made in discussions over a renewal and a departure on a free transfer in the summer considered likely.The 28-year-old is yet to make an appearance under interim manager Rangnick after suffering a thigh injury while on international duty in November, though returned to full training on Monday.Rangnick expects Pogba...
PREMIER LEAGUE・21 HOURS AGO
AFP

Derby manager Wayne Rooney is in contention for an emotional return to Everton after the former England star's impressive handling of affairs on the pitch despite a financial crisis at the Championship club. Rooney is among the bookmakers' favourites to take permanent charge at Goodison Park after Rafael Benitez was sacked on Sunday. The 36-year-old made his name at Everton as a precocious teenager before rejoining his boyhood club following a glittering spell at Manchester United. And, in his short time as a manager, Rooney has offered evidence that the potential return of the prodigal son would be more than just an olive branch to Everton supporters infuriated by the dismal reign of the despised Benitez.
WORLD・18 HOURS AGO
Absolute Chelsea

Brighton vs Chelsea: How to Watch/Live Stream | Premier League

Chelsea face Brighton & Hove Albion in the Premier League on Tuesday night at the Amex Stadium. Thomas Tuchel's side travel down to the south coast looking to bounce back from their dismal defeat to Manchester City at the weekend. Brighton claimed a late 1-1 draw against rivals Crystal Palace...
PREMIER LEAGUE・2 DAYS AGO
The Guardian

Everton have confirmed the appointment of Duncan Ferguson as caretaker manager.Ferguson oversaw training on Tuesday, with the club looking for a successor to Rafael Benitez after sacking the Spaniard on Sunday.The Toffees confirmed in a statement that Ferguson would be in charge “for the club’s upcoming games”, starting with the visit of Aston Villa.Ferguson will be supported in his caretaker role by John Ebbrell and Leighton Baines, along with goalkeeping coach Alan Kelly.Former Scotland and Everton striker Ferguson is set for a second spell as caretaker boss, having taken charge of three games during December 2019 following the dismissal of...
PREMIER LEAGUE・1 DAY AGO
The Independent

Ralf Rangnick considers the issue with Anthony Martial “resolved” following talks with a player he claimed refused to be involved in Manchester United’s trip to Aston VillaUnited had two goalkeepers among their eight substitutes – one short of the number allowed – for Saturday’s 2-2 draw at Villa Park where the France international was conspicuous by his absence.Martial has made no secret of his desire to leave United this month but Rangnick’s claim that the forward “didn’t want to be in the squad” in Birmingham still shocked onlookers.The 26-year-old took to Instagram later that night to say he “will...
PREMIER LEAGUE・1 DAY AGO
The Independent

Chelsea boss Thomas Tuchel would settle for players returning from injury and illness ahead of new signings this month.The Blues have seen their title hopes founder in recent weeks amid a raft of players being unavailable, the most difficult of which to control have been for coronavirus-related reasons.Andreas Christensen became their latest player to test positive for Covid-19 ahead of Saturday’s defeat at Manchester City.While N’Golo Kante and Thiago Silva returned from isolation, Christensen’s absence exacerbated Tuchel’s problems with Trevoh Chalobah, Ben Chilwell and Reece James still out injured and Edouard Mendy at the Africa Cup of Nations.The situation has...
SOCCER・2 DAYS AGO
The Independent

Chelsea face Brighton & Hove Albion in the Premier League on Tuesday night at the Amex Stadium. The two sides only faced each other at the end of last month which saw Danny Welbeck bag a late goal to clinch a 1-1 draw for the Seagulls. Chelsea's title hopes were...
PREMIER LEAGUE・1 DAY AGO
The Independent

Brendan Rodgers hopes a fightback in the second half of the season will be the “story” that defines Leicester’s campaign this time round.For the last two seasons, the Foxes have looked like finishing fourth in the Premier League only to falter and miss out on qualification for the Champions League on the final day on each occasion.This time, Rodgers’ side are playing catch up. Leicester head into their home game against sixth-placed Tottenham on Wednesday night 10th in the table, but with as many as four games in hand on some teams above them due to coronavirus postponements.Should they...
PREMIER LEAGUE・21 HOURS AGO
The Independent

Brighton host Chelsea in the evening kick-off at the Amex Stadium with the second Premier League meeting between the sides in just three weeks. Danny Welbeck cancelled out Romelu Lukaku’s opener in the reverse fixture at Stamford Bridge before new year.And Graham Potter’s side arrive in good form, though they could only draw 1-1 with Crystal Palace despite dominating large spells of the match.This game is being played tonight due to the European champions’ commitment to play in the Club World Cup, shifting from the original 8 February date, a move that Thomas Tuchel is struggling to come to terms...
PREMIER LEAGUE・1 DAY AGO