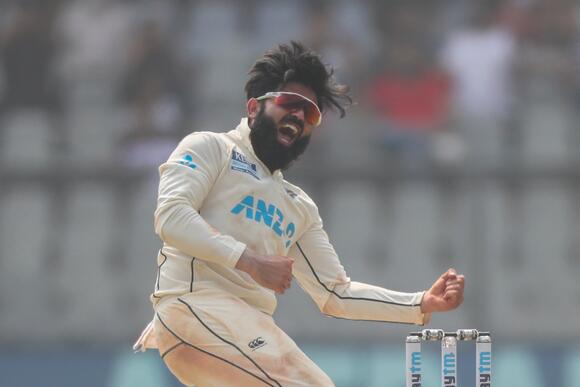 .The left-arm spinner, playing in the city of his birth, became only the third bowler to accomplish the feat in Test cricket after Jim Laker and Anil Kumble as he recorded figures of 10 for 119.

“It is obviously quite a special occasion for me and my family,” Patel said afterwards in an interview broadcast by Sky Sports “It’s pretty surreal.

“I don’t think you ever believe you can achieve something like this. To be able to do it in my career is pretty special. I’m in very illustrious company.

“I think, by the grace of God, I am very fortunate that the stars have aligned to have an occasion like this in Mumbai. To be born here and then come back to achieve something like this is pretty special.”

Former India spinner Kumble was quick to pay tribute, tweeting: “Welcome to the club #AjazPatel #Perfect10 Well bowled! A special effort to achieve it on Day1 & 2 of a test match”

Patel, 33, bowled 47.5 overs during the innings, more than twice as many as anyone else in the side.

The key wicket was that of opener Mayank Agarwal, who was the seventh man to fall for 150. Axar Patel added 52.

New Zealand’s reply stumbled to 38 for six by the tea interval, Mohammed Siraj taking three for 19.

An Indian farmer was left astonished yesterday after one of his goats gave birth to a kid with the 'face of a human' which neighbours described as a 'warning from God'. The goat belonging to farmer Shakar Das, 46, gave birth to several offspring in Gangapur village in the northeastern Indian state of Assam.
INDIA・18 DAYS AGO
The Independent

An emotional Andy Murray saw his hopes of a long-awaited trophy end with defeat against Russia’s Aslan Karatsev in the final of the Sydney Tennis Classic.The Scot put together his best week since claiming his 46th career title in Antwerp in October 2019 but he found himself outmuscled by the blistering power of Karatsev.The top seed thumped winners from all parts of the court and wrapped up a 6-3 6-3 victory for his third title on the ATP Tour.A *stunning* performance 🤯Championship point as @AsKaratsev defeats Murray in Sydney! pic.twitter.com/0ofkiq0D3u— Tennis TV (@TennisTV) January 15, 2022Murray’s voice cracked as he...
TENNIS・1 DAY AGO
The Independent

Travis Head century stops England in their tracks in Hobart

England saw a brilliant start slip through their fingers in the final Ashes Test, with Travis Head’s outstanding century and an injury to Ollie Robinson helping shift the momentum.After winning the toss under gloomy skies in the day/night clash at Hobart England reduced Australia to 12 for three as Stuart Broad and Robinson excelled with the new pink ball.But Head marked his return from a bout of Covid-19 with a fearless 101, crashing 12 boundaries and guiding his side to 215 for five at the evening break.He fell immediately after bringing up his second ton of the series but...
SPORTS・2 DAYS AGO
The Guardian

Over-by-over report: England’s bowlers fight back in Hobart after their batters subside for 188. Catch up on the day’s play with Tim de Lisle
OBITUARIES・1 DAY AGO

Heather Knight has her “fingers crossed” there will be no more Covid-19 cases in the England Women’s Ashes camp after a member of the support staff tested positive.The multi-format Ashes series was brought forward by a week and will start with three Twenty20 matches at the Adelaide Oval, commencing on January 20.The staff member has been in isolation in accordance with Covid management guidelines since the result of the test and will remain in Canberra when the group travel to Adelaide, the England and Wales Cricket Board has announced.“I guess we’re prepared for this, I think it was pretty naive...
PUBLIC HEALTH・2 DAYS AGO
The Independent

Virat Kohli has stepped down from his role as captain of India’s Test team.The 33-year-old first led his country in red-ball cricket temporarily during the winter tour of Australia in 2014 before he permanently took the reins from MS Dhoni at the end of the series.During his tenure as India’s Test captain, Kohli helped them clinch the number one spot in the ICC Test rankings and saw them finish runners-up in the World Test Championship Final last summer.🇮🇳 pic.twitter.com/huBL6zZ7fZ— Virat Kohli (@imVkohli) January 15, 2022Kohli said on Twitter: “It’s been seven years of hard work, toil and relentless perseverance every day to take the team...
SPORTS・1 DAY AGO
SkySports

South Africa chased down their victory target of 212 on Friday, just the fourth time in 133 years that a team has scored more than 200 in Cape Town to win. The latest success follows on from their epic seven-wicket victory in Johannesburg in the second Test when they needed 240 in the fourth innings.
SPORTS・2 DAYS AGO
The Independent

England saw a brilliant start slip through their fingers in the final Ashes Test, with Travis Head’s outstanding century and an injury to Ollie Robinson shifting the momentum in Hobart.Joe Root won the toss under gloomy skies in the day/night clash and his decision to put the Australians in first looked to be paying off handsomely when they reduced their opponents to 12 for three.But Head marked his return from a bout of Covid-19 with a game-changing 101 from 113 deliveries – turning a perilous position into a stumps score of 241 for six. When rain stopped play in the...
SPORTS・2 DAYS AGO

England saved their worst for last as they signed off a calamitous Ashes series with their most shambolic collapse of a tour littered with contenders, slumping to a 146-run defeat and a 4-0 scoreline.Asked to chase down 271 in the day/night clash in Hobart they produced a horror show on the third evening, careering off the rails from 68 without loss to 124 all out.They lost all 10 wickets for just 56 runs, queueing up to throw away their wickets in a blitz of hapless dismissals in the space of 22.4 overs. It was an embarrassment that will take some...
SPORTS・13 HOURS AGO
The Independent

Stuart Broad and Ollie Robinson shared the spoils as England reduced Australia to 85 for four in the opening session of the final Ashes Test in Hobart.The seamers took two wickets apiece to give the tourists a spirited start to the day/night clash, with Australia almost entirely reliant on a freewheeling stand of 71 between Marnus Labuschagne and Travis Head.Zak Crawley had dropped Labuschagne on nought, diving across Joe Root in the slips, a mistake that cost his side 44 runs and nine boundaries as the hosts began to reclaim the momentum.But Labuschagne had been unusually frantic at the crease...
SPORTS・2 DAYS AGO
The Independent

England gave themselves a fighting chance of ending their Ashes tour with a consolation victory, with six of the best from Mark Wood and their best opening stand of the trip.Chasing 271 to win, England were 68 without loss until Rory Burns was clean bowled attempting to leave the ball in the very final act of the second session.A 4-0 series defeat looked to be incoming when they conceded a 115-run first-innings lead in the day/night Test in Hobart, but they turned things around on day three with a stirring comeback.Wood led the way, finishing with career-best figures of six...
SPORTS・15 HOURS AGO
The Independent

England ended day two of the final Ashes Test cursing another desperate batting display, rolled over for 188 to cede control of the match.A total of 17 wickets fell as ball dominated in the floodlit clash at Hobart but it was 10 English wickets through the middle that could prove decisive.Australia reached the close 152 ahead, with Steve Smith in position to stretch the advantage on day three.Quote of the dayStop moving the robot!Stuart Broad.Not our fault @StuartBroad8 🤖😅#Ashes pic.twitter.com/xYYvn0PeCd— Cricket on BT Sport (@btsportcricket) January 15, 2022When Stuart Broad aborted his run up as he approached the crease...
SPORTS・1 DAY AGO

Sir Alastair Cook believes England hit “rock bottom” as another batting collapse from Joe Root’s side handed Australia a comprehensive 4-0 Ashes series win.Abject England lost 10 wickets for 56 runs in 22.5 overs after openers Rory Burns and Zak Crawley had reached 68 without loss in reply to Australia’s second innings total of 155.England had required 271 for victory to finish the series on a high note, but once Burns was the first to go in the 17th over, his team-mates followed him at regular intervals.Former England captain Cook said: “OK, you competed in this game with the ball,...
SPORTS・12 HOURS AGO
The Independent

England have chance to restore some pride in Women’s Ashes, Katherine Brunt claims

Katherine Brunt believes England Women have a chance to “bring back some pride to the English game” when they take on Australia in the Women’s Ashes.After their male counterparts surrendered the urn at the earliest opportunity over just 12 days of cricket this winter, England Women travel to Australia looking to become the first team to beat Meg Lanning’s side in any series since the 2013-14 Ashes.England are the reigning 50-over world champions, with Brunt helping them lift the title back in 2017, but for the 36-year-old, it is the Ashes that are the pinnacle of the sport.“I always look...
BEAUTY & FASHION・2 DAYS AGO
The Independent

England’s abject Ashes campaign came to a fitting finale in Hobart with another dire batting collapse sending the tourists home with a thumping 4-0 defeat and tails between their legs.They lost all 10 second-innings wickets for just 56 runs as they were bowled out for a paltry 124. That sealed a 146-run loss, the latest in a quartet of hammerings that are sure to give rise to an extended post mortem.Series round-up1st Test, Brisbane: Eng lost by 9 wkts2nd Test, Adelaide: Eng lost by 275 runs3rd Test, Melbourne: Eng lost by inns and 14 runs4th Test, Sydney: Draw5th Test,...
SPORTS・8 HOURS AGO
AFP

After Virat Kohli's sudden resignation the spotlight turned to his likely successor as India Test captain on Sunday, with white-ball skipper Rohit Sharma and KL Rahul favourites to take over the high-pressure job. Rohit is already the white-ball captain, so let's see."
SPORTS・17 HOURS AGO
The Independent

Tom Harrison has accepted that the England and Wales Cricket Board must embrace a “moment to reset” in the aftermath of Ashes defeat.The ECB’s chief executive has been at the helm since 2015, overseeing a profound change in the country’s approach to limited-overs cricket.In that time England have gone from perennial also rans in the white-ball game to 50-over world champions and the top ranked team in Twenty20s. Harrison was also an instrumental voice in the launch of The Hundred.But England’s disappointing tour of Australia where they surrendered the urn in 12 one-sided days of action, has shone a...
SPORTS・2 DAYS AGO
The Guardian

Ten overs into proceedings and the Taswegians who had pitched up at the Bellerive Oval brimming with pride could have been forgiven for wondering if the first time they played host to Test cricket’s oldest rivalry might also turn out to be the last. Australia were 12 for three...
SPORTS・2 DAYS AGO
The Independent

Joe Root cut a hollow figure after England’s Ashes humiliation in Hobart but insisted he was desperate to stay on as captain and begin the work of rebuilding from the wreckage.Root has never given any indication that he was ready to pass on the baton – and nobody else has offered any hint that they are ready or able to take it on – but the manner of England’s fifth Test placed his future squarely on the agenda.England took a presentable chance to leave Australia with a consolation victory and torched it with a rapid-fire sequence of self-inflicted wounds.Set a...
SPORTS・8 HOURS AGO