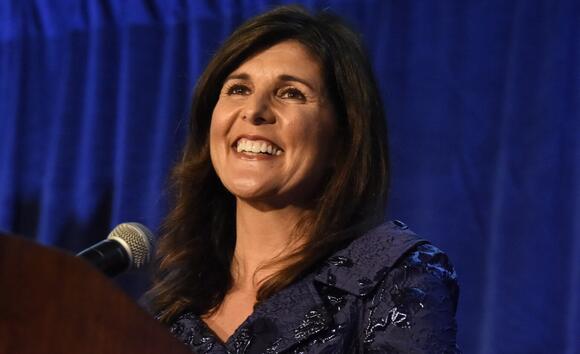 The meeting between the two Republicans, both of whom are potential contenders in the 2024 presidential election, took place at Trump's Mar-a-Lago resort in Florida, and a source told The Hill it was as "positive." What exactly they discussed is unknown.

Haley feuded with Trump publicly following the aftermath of the Jan. 6 riot at the U.S. Capitol. In a feature story in Politico , she blasted the former president for his refusal to concede the 2020 election and suggested he was responsible for the violence.

Shortly after those remarks against Trump, he refused to meet with her in February at Mar-a-Largo. Since then, she has worked to make amends with the former president.

Haley, who is also a former governor of South Carolina, is widely seen as a potential contender for the 2024 presidential election. In April, Haley said that she would not run in 2024 if Trump ran. In October, she walked that back and suggested that her decision about 2024 is not dependent on what Trump does.

In January, she started the Stand for America political action committee, which is dedicated to establishing a conservative majority in Congress. She has also been politically engaged with key states such as Iowa , New Hampshire , and Virginia .

During a speech Thursday, when she received the Nathan Hale Patriot Award from the Citadel Republican Society, Haley said she anticipates that Republicans will regain control of Congress in 2022.

She’s a back stabbing Witch. She’s been trained by the worse of the worst in the GOP. She will be their door mat and she will only say, yes sir!

I saw the picture of those two!! All kissy kissy and Trump was so close to her I bet he tried to grab her you know what!!😆🤢💙

Former President Donald Trump dismissed reports of rising tensions between himself and Florida Gov. Ron DeSantis ahead of a possible 2024 election clash.
POTUS・2 DAYS AGO
WashingtonExaminer

WATCH: Psaki suggests kickboxing and margaritas for those upset over failed legislation

White House press secretary Jen Psaki suggested that Democrats sulk away their frustrations with a kickboxing class and margaritas this weekend.
CONGRESS & COURTS・23 HOURS AGO
The Guardian

Romney, Cheney and others were hailed as the conscience of the party but their deeds in the Senate have provoked accusations of hypocrisy
PRESIDENTIAL ELECTION・1 DAY AGO

“I get along great with Ron,” Trump said.
POTUS・1 DAY AGO
The Guardian

The column called the GOP congressman an "obstructionist" on the 1/6 probe and slammed his "contempt for the truth."
OHIO STATE・21 HOURS AGO
Fox News

Senate Judiciary Committee member Lindsey Graham, R-S.C., told Fox News that earlier Friday he met with former President Donald Trump and that the two had a frank discussion about the state of the country. Graham told "Hannity" that both agreed President Biden has been a disaster as commander-in-chief, and that...
POTUS・1 DAY AGO

The king of the GOP is gathering his court. Former President Donald Trump is expected to meet Wednesday with several members of his political team as well as outside advisers to discuss potential endorsements and races to emphasize in this year’s midterm elections. But what decisions are hammered out at the gathering is debatable.
PRESIDENTIAL ELECTION・3 HOURS AGO
The Guardian

Lansing — Supporters of former President Donald Trump privately discussed ways they could gain access to the Michigan Capitol on Dec. 14, 2020, when the battleground state's presidential electors met, according to four sources with knowledge of the planning. The conversations reveal some of Trump's Michigan backers were considering...
MICHIGAN STATE・6 DAYS AGO

Happy Monday! I'm filling in for Cristiano today. Below: The latest on Trump's social network, and a top executive at Facebook parent Meta leaves. Meet the tech trade group outspending Trump on Facebook ads. Over the past year, lawmakers have introduced a flurry of proposals aiming to overhaul the country’s...
POTUS・13 DAYS AGO
Newsweek

The most successful line of attack against a potential Trump 2024 candidacy will likely come from the populist right.
FLORIDA STATE・2 DAYS AGO
Newsweek

Experts say the House committee investigating the Capitol riot has hundreds of pages of documents and more potential testimonies that can prove to be explosive.
U.S. POLITICS・1 DAY AGO

While Biden has said he plans to seek another White House term, Trump has not confirmed that he'll enter the race.
PRESIDENTIAL ELECTION・2 DAYS AGO
Business Insider

Pelosi defended congressional stock trading, stating that the U.S. is a "a free-market economy" and that lawmakers "should be able to participate in that."
POTUS・2 DAYS AGO
Newsweek

Democrats attempted to change the filibuster in order to pass voting rights legislation in the Senate this week.
CONGRESS & COURTS・1 DAY AGO