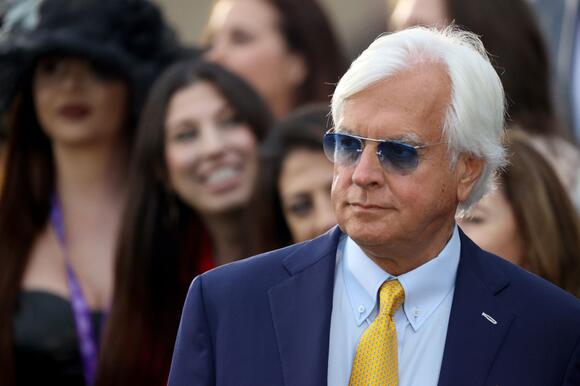 Trainer Bob Baffert , the subject of a half-year of speculation over the legitimacy of Medina Spirit’s win in the Kentucky Derby , made a case for innocence on Friday saying there is clear proof the horse was not injected with betamethasone but instead the medication was administered through an ointment.

Craig Robertson, Baffert’s Kentucky-based attorney, issued a news release saying: “The presence of betamethasone valerate in Medina Spirit, which resulted from a topical appointment, is not a rules violation.” This information comes after the results of testing of a split urine sample by Dr. George Maylin, director of the New York Testing and Research Program.

The case Baffert is making is that the Kentucky regulations specifically deal with betamethasone acetate, which is administered through injection, not betamethasone valerate.

However, Mary Scollay, executive director of the Racing Medication and Testing Consortium and former equine medical director for the Kentucky Horse Racing Commission, says it’s not so clear.

“The rule prohibits the presence of betamethasone,” Scollay said. “It does not specify beyond that. Valerate or acetate — doesn’t matter.”

Baffert has not been charged with any violation by the KHRC after it informed him in May that Medina Spirit tested positive for betamethasone, a legal medication, just not legal on race day. Churchill Downs, citing Baffert’s five medication violations in a year — two of which were by contamination and this one for which he has not been charged — suspended the Hall of Fame trainer from its tracks for two years. As it currently stands, Baffert’s horses can not run in the Kentucky Derby.

“Those results have now definitively confirmed that the betamethasone present in Medina Spirit’s system did indeed come from the topical ointment Otomax and not an injection,” Robertson said.

“In other words, it has now been scientifically proven that what Bob Baffert said from the beginning was true — Medina Spirit was never injected with betamethasone and the findings following the Kentucky Derby were solely the result of the horse being treated for a skin condition by way of a topical ointment — all at the direction of Medina Spirit’s veterinarian.”

Betamethasone is a legal anti-inflammatory and not considered a traditional performance enhancing drug, other than the fact that if a horse feels better they may run better.

How that explanation will play with the KHRC and Churchill Downs is unclear. The KHRC has not commented on the situation because no charges have been filed and there was no immediate reaction from Churchill Downs.

Baffert has been supported by his fans, and reviled by his critics, as he has remained mostly silent after he went on a two-day media blitz to proclaim his innocence after he announced the positive.

“It’s truly painful when you know what the truth is,” Baffert told The Times in September in his first interview on the subject since May. “There have been so many false narratives that have come up and the hearing process isn’t even done yet. The consolation is knowing the truth will come out as the process plays out.”

The decision by Churchill Downs to ban him for two years has added an eerie feel to the usual road to the Kentucky Derby as his winning horses were denied Kentucky Derby qualifying points.

Corniche, trained by Baffert, won the Breeders’ Cup Juvenile last month at Del Mar and is the favorite in most Kentucky Derby future betting pools. Corniche’s qualifying points were vacated when he won the Juvenile. Churchill Downs did not include any Baffert horses in its future’s betting pool last weekend.

“Since May, Mr. Baffert has been the subject of an unfair rush to judgment,” the release said. “… Now it has been scientifically proven that Mr. Baffert was truthful, did not break any rules of racing, and Medina Spirit’s victory was due solely to the heart and ability of the horse and nothing else, it is time for all members of racing to come together for the good of the sport.”

Racing has not always worked together and there will no doubt be dissenting opinions to the legitimacy of Baffert’s claim. So, this drama is likely far from over, but this development raises more questions.

Phil Mickelson smashes DRIVER OUT THE BUNKER at American Express

Phil Mickelson finished bottom of the leaderboard on day one of The American Express after carding a disastrous 6-over 78 - on a day where a video of him crushing his mini driver out of a fairway bunker went viral on social media. Mickelson, who was playing the easier La...
GOLF・14 HOURS AGO
Sportsnaut