Callum Wilson says Newcastle lost ground at the start of the season because they were not fit enough for the pace of the Premier League.

The striker is the latest player to suggest the squad was not in peak condition under former boss Steve Bruce and that fitness has only improved for the arrival of Eddie Howe.

Sportsmail has reported previously how there was concern among players over training and preparation, with excessive days off a particular point of ire.

Newcastle are without a win in 14 matches this season and did not look as fit as the opposition during the opening weeks, a suspicion confirmed by Wilson. 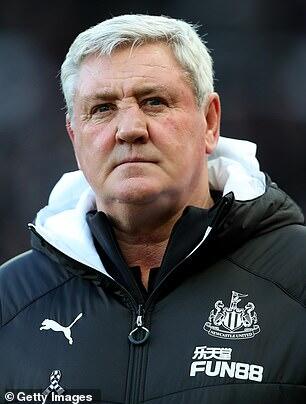 Wilson was speaking with West Ham’s Michail Antonio on the BBC’s Footballer’s Football podcast, and he added: ‘I noticed that (difference in fitness) when we played each other in the first game (West Ham won 4-2).

‘Every manager has different philosophies in terms of how to get players fit. Ours would have been different to yours, but come day one you're hoping that you've put the work in and you're in a good place.

‘Whereas in the game, it showed the longer it went on the more you overran us, which probably boiled down to not being as fit as what we should have been.

‘Obviously for lads, technique and stuff starts going out the window when you're tired. Your concentration goes and then all of a sudden you scored a few goals within a short space of time.

‘The way the game went, it started turning into a basketball match. That didn't suit us because of the fitness levels. You attack, we attack, you attack, by the time it's the third attack I'm thinking, “Boy, I can't go on that run again because I haven't got the energy”.

Wilson and Ryan Fraser played under Howe at Bournemouth, and the latter has also spoken about the impact of the new manager.

‘Before, lads would just go in after an hour of training,’ said Fraser. ‘Even after two hours now they will grab you and say, “No, we’re doing this today”.

‘The place is a lot happier. I don’t want to say anything about the previous staff, it’s disrespectful. I think everyone is seeing changes. No days off with this gaffer.’

A drone interrupted play at Brentford, we had a late, late winner at Old Trafford and Newcastle dug in for victory on an eventful afternoon
PREMIER LEAGUE・2 DAYS AGO
San Diego Union-Tribune

Newcastle boss Eddie Howe admits they're carrying injured players after victory at Leeds. Howe has revealed that Joelinton has been playing through the pain barrier during his impressive run of form in recent weeks. The £40million man was forced off early during the victory at Leeds and is now facing...
SPORTS・1 DAY AGO
The Independent

Newcastle boss Eddie Howe described his side’s 1-0 win at Leeds as a “heroic effort” after it lifted them closer to Premier League safety.Jonjo Shelvey’s 75th-minute free-kick stunned the home crowd at a sold-out Elland Road and secured Newcastle just their second win of the season.Howe’s players ran themselves into the ground to keep rejuvenated Leeds at bay and climbed to within a point of fourth-bottom Norwich with a game in hand.Howe said: “To a man, everybody really contributed to that win today. There was incredible intensity in the game and there always is when you play Leeds.“We had to...
PREMIER LEAGUE・1 DAY AGO

Jonjo Shelvey’s second-half free-kick clinched Newcastle a 1-0 win at Leeds as their Premier League survival bid received a major boost.Shelvey curled home the only goal from 20 yards in the 75th minute and Newcastle were rewarded for their lung-busting effort with just their second win of the season.Eddie Howe’s side were under the cosh for long spells at Elland Road but ran themselves ragged to deny Leeds a third straight league victory and climb to within a point of safety with a game in hand on fourth-bottom Norwich.Back-to-back league wins had lifted Leeds nine points clear of the bottom...
PREMIER LEAGUE・2 DAYS AGO
The Independent

Newcastle boss Eddie Howe believes a successful transfer window is key to the club’s bid to retain their Premier League status.The Magpies gave their survival chances a big lift as Jonjo Shelvey’s second-half free-kick clinched them a 1-0 win at Leeds to lift them to within a point of safety.Howe described recent signings Kieran Trippier and Chris Wood as “magnificent” in his side’s second victory of the season and hopes to add more new players before the current window closes.🇸🇦 #NUFC are travelling to Jeddah in Saudi Arabia today for a week-long warm weather training camp following yesterday's victory at...
PREMIER LEAGUE・1 DAY AGO
The Independent

What the papers sayThe Manchester Evening News says Jesse Lingard is looking to secure a loan move away from Old Trafford in the January transfer window. The 29-year-old midfielder has made just nine Premier League appearances this season, and it is believed Newcastle are interested in a potential loan deal.Brentford are finalising a deal for former Tottenham midfielder Christian Eriksen, according to the Daily Mail. The 29-year-old’s contract is reportedly for six months with an option for a one-year extension, however it all hinges on whether Eriksen completes his medical following his collapse during Denmark’s Euro 2020 match against Finland...
PREMIER LEAGUE・11 HOURS AGO
The Independent

Eddie Howe and his Newcastle United squad headed for Saudi Arabia at the weekend having breathed new life into their bid for Premier League survival with a hard-fought victory at Leeds.However, while Howe and his staff put the players through their paces at a warm weather training camp in Jeddah, work continued apace behind to scenes to add to the January acquisitions of Kieran Trippier and Chris WoodHere, we take a look at some of the players who could follow the duo to St James’ Park during the final week of the winter window.Sven BotmanThe Magpies made the capture of...
PREMIER LEAGUE・6 HOURS AGO

Crystal Palace boss Patrick Vieira has played down the absence of key Liverpool duo Mohamed Salah and Sadio Mane for Sunday’s meeting at Selhurst Park.The Reds will again be without their two main attackers, who are away competing at the Africa Cup of Nations in Cameroon.It will no doubt boost Palace, who lost 3-0 to Liverpool in September with the pair on target and both hit doubles against the south London outfit last season too.Jurgen Klopp’s side have coped well without Salah and Mane, winning three of the four games they have missed to progress in two cup competitions and...
PREMIER LEAGUE・2 DAYS AGO
San Diego Union-Tribune

Pep Guardiola believes record signing Jack Grealish delivered “by far” his best performance in a Manchester City shirt during Saturday’s 1-1 draw at Southampton Playmaker Grealish is yet to consistently hit top form for the Premier League leaders since arriving for £100million from boyhood club Aston Villa last summer.The England international, who has managed only two top-flight goals and a couple of assists this term, was unable to inspire City to victory on the south coast as their remarkable winning run ended at 12 games.He cut a frustrated figure at times and was involved in a first-half flash point with...
PREMIER LEAGUE・20 HOURS AGO

A key clash in the battle for European places will be on show at Old Trafford on Saturday afternoon, where Manchester United host West Ham United.David Moyes’ side have been extremely impressive for the majority of this term and remain in fourth in the Premier League table, where a huge battle is developing between at least four sides.These teams met twice in short order earlier in the season, United winning in the league in dramatic fashion before the Hammers knocked them out of the Carabao Cup, but there’s arguably even more at stake this time around - in part due...
PREMIER LEAGUE・2 DAYS AGO
The Independent

Ralf Rangnick praised Harry Maguire for producing a performance befitting the captain’s armband on his return to the Manchester United starting line-up.The world’s most expensive defender has been under close scrutiny this season, both for his displays in the heart of defence and leadership of the team.Maguire missed the first two matches of 2022 with a chest injury and was named on the bench against Aston Villa and Brentford as Rangnick favoured Victor Lindelof alongside Raphael Varane.But the United skipper was restored to the starting line-up against West Ham in the absence of Lindelof, who was supporting his family after...
PREMIER LEAGUE・20 HOURS AGO
The Independent

A football fan has been charged with assault after two Aston Villa players were floored by a bottle thrown from the crowd at Everton’s Goodison Park.Roger Tweedle, of Cranehurst Road, Walton, is accused of throwing a bottle that left Villa players Lucas Digne and Matty Cash on the ground on Saturday.The alleged incident occurred as Aston Villa celebrated a goal in the first half of the match.The 19-year-old, who is also charged with throwing an item onto the pitch, has been released on conditional bail.He will appear at South Sefton Magistrates Court on February 28.The game was Duncan Ferguson’s first...
PREMIER LEAGUE・22 HOURS AGO
The Independent

Virgil van Dijk insists Liverpool are paying no attention to Manchester City despite closing the gap on their Premier League title rivals.A hard-fought 3-1 win at Crystal Palace on Sunday lifted the Reds to within nine points of Pep Guardiola’s side, who were held to a 1-1 draw away to Southampton on Saturday.City have played a game more than Liverpool and the Merseyside outfit are set to visit the Etihad Stadium in April, leaving plenty to play for.“You can’t deny it’s in your mind, but as we have said many times we take it game by game,” Van Dijk said...
PREMIER LEAGUE・8 HOURS AGO
San Diego Union-Tribune

Liverpool manager Jurgen Klopp admits midfielder Curtis Jones occasionally needs a “push” but he has been delighted by the response.Klopp recently had a pep talk with the academy graduate, who turns 21 next week, in which he told the local youngster it was time to take his game up a level.Jones, who had been sidelined by a freak eye injury and Covid, has started the last two matches and was particularly impressive in the Carabao Cup semi-final win over Arsenal on Thursday.“Yes, Curtis was really good the last two games. I know him for a long time now and I...
PREMIER LEAGUE・2 DAYS AGO
The Independent