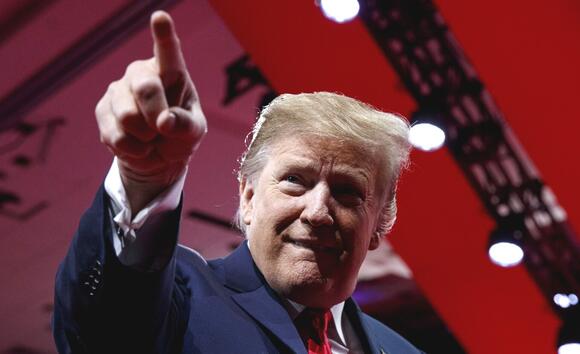 Echoing the opinions of other people close to Trump , Gorka told GB News he is extremely confident that Trump will attempt to get his old job back with GOP prospects looking good for retaking one or both chambers of Congress after the 2022 contest.

"There's only one thing that will stop him: If we don't crush the Democrats in the midterm elections next year. Because he can't be at the mercy of impeachment again. He has to have the House and the Senate behind him," Gorka said.

He opined that the Biden administration has had a "disastrous" 11 months and predicted that Trump will "stroll back into the West Wing."

Trump himself has teased, but not committed to, another run as he points to the 2022 midterm elections. He predicted a "massive red wave sweep" will happen in a recent speech.

President Joe Biden has said he intends to run for reelection, setting up a possible rematch against Trump in 2024.

He’ll milk his supporters for every last dime he can right up to the last minute and drop out. He can’t risk losing again. He wants to keep that money train going with his conspiracy crap and slap everyone down with his lies and deceit in the process. He’s the scum of the earth and belongs behind bars! What a disgusting piece of trash!

Trump’s mental sickness will have progressed too much for him to run for anything! He can have fun running around in circles, in an Insane Asylum!

TRUMP running? TRUMP has difficulty getting IN and OUT of his GOLF CART now! TRUMP says his BONE SPURS, hurting him bad now! Republicans can you’ll suggest a REMEDY? 😲

A key ally to former President Donald Trump played down talk of a growing feud with Florida Gov. Ron DeSantis ahead of a potential 2024 election showdown. Mark Meadows, who was Trump's final White House chief of staff, made an appearance on Newsmax on Tuesday to respond to reports that Trump is fed up with DeSantis and, according to the New York Times, that DeSantis has told friends that it's too much to ask that he bow to Trump. People "want Trump in the White House," Meadows insisted.
PRESIDENTIAL ELECTION・20 HOURS AGO
WashingtonExaminer

President Joe Biden expressed disbelief at former President Donald Trump's hold on the Republican Party, claiming to have spoken to at least five GOP senators who are afraid of clashing with his predecessor.
PRESIDENTIAL ELECTION・1 HOUR AGO
WashingtonExaminer

President Joe Biden, who promised to unite the nation in his inaugural address one year ago, has failed in epic fashion in the eyes of voters, according to a series of year one polls out this week.
PRESIDENTIAL ELECTION・9 HOURS AGO
Newsweek

Amid reports of hostility between Trump and DeSanits, a spokesperson for the Republican governor told Newsweek such talk is a "fabricated media narrative."
POTUS・1 DAY AGO

Congressman Kevin Brady (R-TX), Ranking Member House Ways & Means Committee, tells Brian Kilmeade that it is clear President Biden bungled the economy in a big way during his first year in office. Brady says we should have had a banner year with the economy in 2021 based on what President Biden inherited from President Trump and instead we saw President Biden repeal three years of wage growth and take his eye off covid and dismissed and denied inflation and worker shortages while pursuing an extremist socialist spending plan. On the democrat sponsored voting rights bill, Brady doesn’t believe it has a chance unless progressives would be willing to walk away from everything they care about to resurrect the bill and Brady doesn’t see that happening. Brady also defended Texas voting law and how it has expanded early voting and added hours including on Sunday. Brady says there is not statewide voter suppression and the democrats are pushing a big lie in order to have a federal takeover of elections.
TEXAS STATE・2 DAYS AGO
Newsweek

Trump mentioned the death of Champ while chastising the president for spending time at his Delaware home.
PRESIDENTIAL ELECTION・11 HOURS AGO

As he walked through the front gate of the White House complex last year for the first time as President, Joe Biden declared it felt like “going home.” If the presidency seemed then like a natural fit for a 50-year creature of Washington, today its limits are leading to a reckoning over expectations and ambitions […] The post Joe Biden enters the second year of his presidency looking for a reset after a tumultuous first 12 months appeared first on The Atlanta Voice.
PRESIDENTIAL ELECTION・8 HOURS AGO
WashingtonExaminer

Biden is winning on one front: Judicial nominees

President Joe Biden released his 13th round of federal judicial nominations Wednesday, marking another notch in his speedy efforts to appoint judges as he raises the total number of nominees since last January to 83.
PRESIDENTIAL ELECTION・3 HOURS AGO
WashingtonExaminer

Freshman Rep. Kat Cammack took to the House floor on Wednesday to define the Biden administration’s first year as “a disaster from top to bottom.”
PRESIDENTIAL ELECTION・6 HOURS AGO

President Joe Biden said he intends to run for reelection in 2024 with Vice President Kamala Harris at his side and praised her efforts in office.
WASHINGTON, DC・1 HOUR AGO
WashingtonExaminer

Rep. Eric Swalwell, a member of the House committee investigating the Capitol riot and a vocal Trump critic, warned that Republicans will "never peacefully concede power again" if they prevail in the midterm elections.
CONGRESS & COURTS・23 HOURS AGO
Newsweek

One QAnon follower said: "When he came out…I instantly felt it was not him. I kept trying to convince myself that it was."
ARIZONA STATE・2 DAYS AGO

"Things are not going well," Romney said Sunday of President Joe Biden's tenure. "And the president needs to stop and reset."
PRESIDENTIAL ELECTION・3 DAYS AGO
WashingtonExaminer

A blitz of newsy and folksy ads from businessman Bernie Moreno, who is running in the Ohio GOP primary to replace retiring Sen. Rob Portman, worked to vault him from last to third, according to internal polling released on Wednesday.
OHIO STATE・2 HOURS AGO
The Guardian

"I think anyone with common sense would be reluctant to go talk to this committee," the GOP congressman said.
CONGRESS & COURTS・3 DAYS AGO