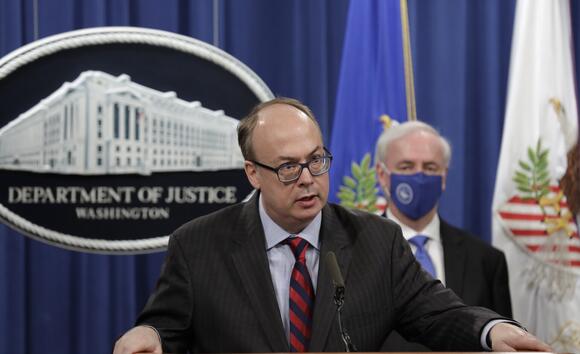 T he House committee investigating the Jan. 6 Capitol riot agreed to delay its deposition of former Justice Department official Jeffrey Clark, whose attorney said he is dealing with a medical condition that prevented him from showing up this weekend.

The deposition will now take place Dec. 16, the panel announced Friday. The medical condition was not disclosed.

EX-TRUMP LAWYER JOHN EASTMAN PLANS TO PLEAD THE FIFTH TO THE JAN. 6 COMMITTEE

"Mr. Clark has informed the Select Committee of a medical condition that precludes his participation in tomorrow's meeting, and he has provided ample evidence of his claim," Tim Mulvaney, a spokesman for the committee said. "Chairman Thompson wishes Mr. Clark well."

In its contempt report , the committee accused Clark of participating "in efforts to delegitimize the results of the 2020 presidential election."

Clark was the assistant attorney general at the time. The committee said he called on the Justice Department to send a letter to Georgia and other states calling for a special legislative session to investigate fraud in the 2020 election.

"In violation of DOJ policy and after a direct admonition from the Acting Attorney General of the United States, Mr. Clark also met with White House officials, including then-President Trump, to discuss efforts to delegitimize, disrupt or overturn the election results," the committee said in its report.

Another lawyer in the committee's crosshairs, John Eastman, informed the committee Friday that he plans to plead the Fifth. Eastman did legal work for Trump during his efforts to overturn the 2020 election.

“"Mr. Clark has informed the Select Committee of a medical condition that precludes his participation in tomorrow's meeting, and he has provided ample evidence of his claim," - Continually showing signs he’s suffering from a cranial-rectal inversion episode???

The House select committee investigating the Jan 6 attack on Congress is seeking an interview with former Attorney General William Barr following the shocking revelation first reported by Politico that Donald Trump’s allies drafted an executive order directing the seizure of voting machines.Rep Bennie Thompson, the committee’s chairman, made the announcement on Sunday during an interview with ABC News. He added that lawmakers on the panel have spoken with Mr Barr previously in the course of their investigation, but were now interested in learning more about the draft executive order created some time in December of 2020.Appearing on This...
PRESIDENTIAL ELECTION・4 DAYS AGO
The Guardian

Stephanie Grisham gave more significant details than expected about what Trump was doing before 6 January, sources say
POTUS・7 DAYS AGO

Never miss a story: Follow your favorite topics and authors to get a personalized email with the journalism that matters most to you. The House committee investigating the U.S. Capitol insurrection is asking Ivanka Trump, daughter of former President Donald Trump, to voluntarily cooperate with its probe. The committee sent...
PRESIDENTIAL ELECTION・7 DAYS AGO

The Justice Department is investigating allegations of phony Electoral College certifications from 2020 that declared Republicans were the electors voting for Donald Trump and Mike Pence when in fact Democrats had won and voted for President Biden and Vice President Harris, Fox News has confirmed. Originally reported by CNN, the...
PRESIDENTIAL ELECTION・1 DAY AGO
The Associated Press

ATLANTA (AP) — The prosecutor weighing whether Donald Trump and others committed crimes by trying to pressure Georgia officials to overturn Joe Biden’s presidential election victory said a decision on whether to bring charges could come as early as the first half of this year. Fulton County District...
GEORGIA STATE・17 DAYS AGO
MSNBC

Rachel Maddow reports on remarks by Deputy Attorney General Lisa Monaco that the Department of Justice is engaged in investigations stemming from multiple states' referrals of Trump supporters trying to pass themselves off as actual state electors in forged documents sent to the federal government. Jan. 26, 2022.
POTUS・1 DAY AGO
myrtlebeachonline.com

Trump supporter who attacked police during Jan. 6 Capitol riot gets 44 months in prison

A Trump supporter and former QAnon adherent from South Carolina who joined a mob and attacked police at the Jan. 6, 2021, riots at the U.S. Capitol was sentenced Wednesday to 44 months in prison by a federal judge. Prosecutors had asked for a minimum of 51 months in prison...
MYRTLE BEACH, SC・1 DAY AGO

News that Supreme Court Justice Stephen Breyer plans to announce his retirement sent shockwaves through Washington and ended GOP hopes that the next court vacancy would occur while Republicans controlled the Senate.The court underwent significant changes under the Trump administration, when over the course of four years, president Donald Trump oversaw the confirmation of three new justices to the bench, a third of the total bench, shifting the makeup of the court firmly to the right.Mr Breyer’s retirement during the reign of a Democratic president means that the court’s overall make up will not change, for now. Thanks to...
CONGRESS & COURTS・1 DAY AGO
POLITICO

"March 1 is not a deadline for one thing or another," he said at a POLITICO event. What happened: Majority Leader Steny Hoyer took a pragmatic tone about the future of the Democrats' climate change and social spending bill during an interview with POLITICO on Tuesday, insisting the March 1 State of the Union address should be viewed as an artificial deadline.
CONGRESS & COURTS・2 DAYS AGO
News 12

The Biden administration has officially withdrawn a rule that would have required workers at big companies to get vaccinated or face regular COVID testing requirements.
U.S. POLITICS・2 DAYS AGO
Telegraph

Video outtakes of Donald Trump could become key as a congressional committee prepares to hold Watergate-style televised hearings into the riot at the US Capitol on January 6 last year. In a letter sent by the committee to Ivanka Trump this week, asking for her testimony, it was disclosed that...
POTUS・4 DAYS AGO

The wife of one of the Supreme Court justices who could be charged with deciding whether the House January 6th select committee can view Trump administration White House records has signed on to an open letter calling for the committee’s two Republican members to be ousted from the House GOP conference. Virginia “Ginny” Thomas, a longtime conservative activist and the wife of Justice Clarence Thomas, was one of more than 60 signatories to the open letter, which was organised by the pro-Trump Conservative Action Project and asks House Minority Leader Kevin McCarthy to “act immediately to remove” Reps Liz...
CONGRESS & COURTS・9 DAYS AGO
wfxb.com

The House select committee investigating the Capitol Riots has issued more subpoenas including one for House Minority Leader Kevin McCarthy. McCarthy said he will not cooperate with the request from the committee hours after the panel asked him to voluntarily provide information including details about former President Trump’s state of mind during the attack and in the weeks after. McCarthy expressed belief that the committee is not ‘conducting a legitimate investigation’ citing House Speaker Nancy Pelosi’s rejection of some of his picks to serve on the panel and he claims it is not ‘serving any legislative purpose.’
CONGRESS & COURTS・14 DAYS AGO
FOXBusiness

A federal judge threw out a massive offshore oil and gas lease sale after it was challenged by environmental groups, ruling that the Biden administration violated federal law when it relied on "arbitrary and capricious" climate change impact model. U.S. District Court for the District of Columbia Judge Rudolph Contreras...
CONGRESS & COURTS・3 HOURS AGO
USA TODAY

United States needs Defending Ukraine Sovereignty Act. Triggered measures must be put in place to signal the concrete costs before a Russian invasion.
MILITARY・1 DAY AGO