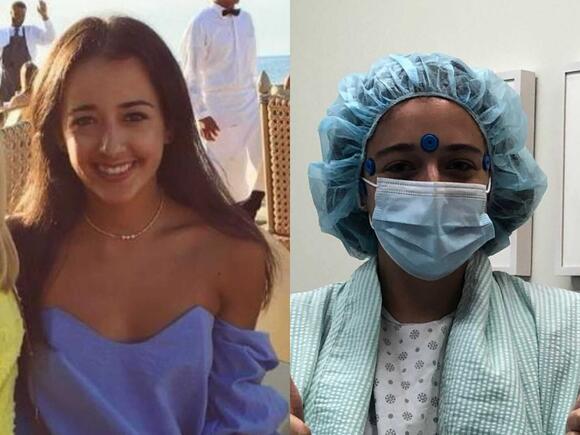 At first, 24-year-old Danielle Soviero thought the numbness on the right side of her body was a pinched nerve. But within days she was slurring her speech and dropping things. That's when she went to the hospital.

While there, she said, doctors diagnosed her with a benign tumor that had caused blood to pool in her brain. "I'm freaking out. I'm 24 years old and you hear the word … 'brain tumor,'" the now 25-year-old preschool teacher in Long Island told Today .

But she says her doctor didn't share her panic. Since the tumor was benign and the bleeding could have been a one-off incident, he told Soviero to live life as "normal," she told Insider.

Had Soviero followed his advice, she may not be alive today, since the condition she had can cause stroke and, rarely, death . Other young women have spoken out about how advocating for themselves in the healthcare system have saved their lives.

Soviero tried to follow her doctor's advice but lived in fear for about six months. "As you can imagine, living 'normally' knowing you have a brain tumor that can hemorrhage at any moment is a bit difficult," she told Insider.

Then, in April 2021 she suffered a migraine so excruciating she thought she was going to die. When she texted the clinician, she said he merely advised acetaminophen.

For two more weeks, she experienced a "strange pressure" in her head that felt like her brain was moving when she stood up, according to Today. "I called my doctor and I was like, 'Something is wrong. I need another MRI. I'm not going to take 'no' for an answer.'"

The MRI found Soviero's tumor had doubled in size and had hemorrhaged again. But the doctor said it couldn't be removed due to its depth and location, Soviero said.

"I was angry. I decided that I needed to take matters into my own hands," Soviero told Insider. "I researched all about my condition and made appointments with the top neurosurgeons in the country."

She found one who told her surgery was, in fact, her only option to avoid permanent damage. Before the July 2021 surgery, the surgeon discovered the tumor had tripled in size and could have caused a stroke or death.

The 6-hour procedure was successful, but it's taken months of occupational, physical, and speech therapy to relearn even how to speak and eat.

She told Today it was unlike her to push back on a doctor, but "it felt pretty good to be in charge of my own body."

Research has shown that women report more severe levels of pain, more frequent pain, and longer periods of pain than men, but are treated for it less aggressively. One 2018 survey found 62% of women have felt dismissed by a male doctor compared to 42 percent of men. When visiting female clinicians, 47% of women feel dismissed and 37% of men do.

Those slights can be dangerous.

Brittany Scheier, who suffered a stroke at 27, previously told Insider her symptoms were brushed off in the ER as drug- or alcohol-related. Another woman told Insider that her birth-control linked blood clot was also dismissed as alcohol or drugs at age 15. And TikTokers , including one pregnant woman whose stroke was misdiagnosed as dehydration, have encouraged others to speak up for themselves.

Dr. Suzanne Steinbaum , a cardiologist in New York City, previously told Insider she often hears women say "I was listening to the doctor. Maybe they're right,'" she said. "No one knows our bodies as well as we do. Nobody is living in our bodies. We know when we're not OK."

I saved my own life when I was 30 years old I told my gynecologist that I thought I had cancer and he said Oh no you're too young and so I demanded that I have a hysterectomy because I guess they merging and I kept having cysts so when he went in there and did the hysterectomy I had ovarian cancer 4th stage I would have died and it was a miracle I survived I had a blood transfusion and everything else it was really horrific! And I am so grateful today but I listen to my own body and took charge of myself but at least the doctor did listen to me and did the surgery I'll never forget when he stood in the doorway three days later and said you were right you have to listen to your own instincts of yourself because they don't usually lie? cuz it will save your life🙏🏻

I would think she needs to be looking into a civil suit against that doctor for a misdiagnosis because he very well could have killed her by his negligence... I mean he told her to take Tylenol when she called with an excruciating headache that was because of the tumor doubling in size!!! I would definitely be seeking some sort of retribution from that doctor!!

Ive lost respect for doctors. no theyre not Gods but theyre often too full of themselves and dont care enuf abt you unless you push them to. the male doctors especially

6-Year-Old Misdiagnosed with Pulled Muscle, Appendicitis Before Learning She Had Neuroblastoma; Her Mother Was Called ‘Dramatic’ by Doctors

A mom in the UK was called “dramatic” for insisting that something was wrong with 6-year-old daughter Flo; doctors first dismissed it as muscular pain but an MRI showed she had cancer. It was neuroblastoma. Neuroblastoma is a cancer commonly found in the adrenal glands which typically affects...
CANCER・10 DAYS AGO
Wyoming News

THURSDAY, Jan. 20, 2022 (HealthDay News) -- In another breakthrough for animal-to-human organ transplantation, U.S. researchers say they've transplanted two genetically modified pig kidneys into a living human. The recipient was Jim Parsons, 57, a brain-dead man on life support whose family agreed to allow the surgical team at the University of Alabama at Birmingham (UAB) to use his body for this research. The kidneys functioned well and were not...
SCIENCE・19 HOURS AGO
Insider

A man suffered a 'shower of strokes' at age 31, and took more than 6 months to relearn how to walk, talk, and eat

Kirk Godbeer, a 31-year-old chef, woke up with pins and needles on his left side. 22 months later, he's urging people to manage their stroke risk.
HEALTH・1 DAY AGO

A two-time cancer survivor says he “flipped a coin” when deciding whether or not to amputate his leg.Alexander Parra, 20, was just 15 when he was first diagnosed with cancer and was told he would need chemotherapy for the next nine months.Parra, who was diagnosed with Osteosarcoma, or bone cancer, said: “My knee started hurting way more than usual and then all of a sudden, a huge lump showed up on my knee. The doctors brought me in for an appointment where they sat me down and they told me I had cancer.“It was the last thing I expected. Who...
CANCER・18 HOURS AGO
KESQ News Channel 3

In the midst of COVID-19 restrictions, the mother was unable to get a face to face GP appointment for her 6-year-old daughter and ended up rushing her to the community hospital in where she claims they told her the pain was probably muscular. But, unfortunately, weeks later the child could barely stand up. The mom is now sharing her story with the world after her daughter’s pulled muscle turned out to be a rare form of disease.
DISEASES & TREATMENTS・2 DAYS AGO
Insider

“Please get vaccinated”, Woman with brain tumor broke down in tears as she revealed she can’t get surgery to remove it because the hospital is full of COVID-19 patients

Unfortunately, the ongoing Coronavirus pandemic continues to have a direct negative impact on the healthcare system and on patients who desperately need lifesaving surgery. While people wait to decide whether to get vaccinated or not, the repercussions are terrifying as hospitals fill up with COVID-19 patients. What people don’t realize is that those who need life-saving surgeries may not have access to ICU beds because they’ve already been taken up.
PUBLIC HEALTH・13 DAYS AGO
survivornet.com

5-Year-Old Boy Battling Aggressive Brain Tumor Is ‘Stronger, Braver and Kinder Than I’ll Ever Be,’ Says Dwayne ‘The Rock’ Johnson; What To Know About DIPG

Dwayne Johnson shares on Instagram a video of him speaking with a young boy named Jett, 5, battling a highly aggressive brain tumor with a poor prognosis. The boy is battling Diffuse Intrinsic Pontine Glioma (DIPG), a brain tumor that presents only in children, generally between the ages of 5 and 9.
CANCER・9 DAYS AGO
Sun Journal

A local family is asking for support and encouragement for their daughter who was recently diagnosed with an inoperable brain stem tumor. According to a press release,15 year old Auburn Banks was diagnosed Saturday, Dec. 11 with an inoperable Diffuse Intrinsic Pontine Gliomas (DIPG) Brain Stem Tumor. This type of...
NEW BERN, NC・8 DAYS AGO
Fortune

Never miss a story: Follow your favorite topics and authors to get a personalized email with the journalism that matters most to you. As COVID-19 infections continue to escalate in the new year, some patients have been reporting a strange new symptom: night sweats. Commonly associated with other conditions like...
PUBLIC HEALTH・17 DAYS AGO
The US Sun

Three Omicron ‘warning signs’ to watch out for in your skin, nails and lips

A TRIO of Omicron "warning signs" have been flagged to watch out for. Symptoms showing up in your lips, skin and nails could mean you need urgent medical care. Noticing you or a loved one have pale, grey or blue coloured skin in any of these areas is key. It...
SKIN CARE・8 DAYS AGO
The US Sun

OMICRON symptoms are coming on faster than Delta, it appears. There are a few telltale signs that you might have the mutant strain - but you may be able HEAR the first symptom before you feel ill. If people are commenting on the fact that your voice sounds croaky, and...
HEALTH・25 DAYS AGO
The US Sun

THE bulked-up dog believed to be the world's "strongest" pup was born with a genetic mutation that gave her a bulging 24-pack and muscles like Arnold Schwarzenegger. But just like The Terminator star, Wendy the whippet was a gentle giant. Born with a rare genetic mutation, Wendy was twice as...
PETS・1 DAY AGO
Insider

Hana Horká, 57, wanted to recover from COVID-19 so she could get a health pass to visit dining and social areas without being vaccinated.
PUBLIC HEALTH・1 DAY AGO
Business Insider

I'm an ER nurse who's comforted panicked COVID-19 patients as they beg to live. Too often, they die anyway.

"I am urging everyone to put politics aside and come together," Thad Cummings told Insider. COVID-19 has "caused us to lose our humanity."
MUSKEGON, MI・1 DAY AGO
q13fox.com

MIDLAND, Wash. - Two 12-year-old girls were hit by a truck and left on the side of the street in Pierce County. Immaculee Goldade's family said she did not survive. They said her best friend is hospitalized. Goldade's family talked with FOX 13 about their heartache as they beg the...
PIERCE COUNTY, WA・4 DAYS AGO
Newsweek

The woman broke things off after becoming "grossed out" at the idea they were family.
RELATIONSHIP ADVICE・2 DAYS AGO
Health Digest

Is your lower abdominal pain cause for concern? How do you know if it's a hernia, kidney stones, indigestion, menstrual cramps, or something else?
DISEASES & TREATMENTS・2 DAYS AGO