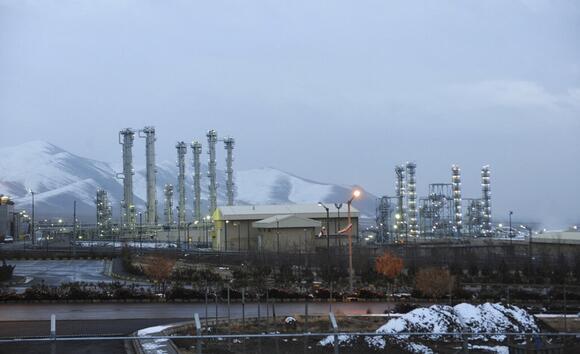 The White House said Iran’s approach in the Vienna nuclear talks showed the regime was not committed to returning to the bargain that forced sharp limits on its nuclear fuel production in exchange for a lifting of sanctions.

“The first six rounds of negotiations made progress finding creative compromise solutions to many of the hardest issues that were difficult for all sides,” press secretary Jen Psaki said. “Iran’s approach this week was not, unfortunately, to try to resolve the remaining issues.”

KAMALA HARRIS BRACES FOR LOSS OF ANOTHER TOP AIDE

The Biden administration has said the United States is prepared to return to mutual compliance in the deal. “If Iran is equally committed, a solution is at hand,” Psaki said. “But we did not see that from them this week.”

The seventh round of talks ended in Vienna Friday, with little progress in the negotiations. Iran has accelerated its nuclear advances under the new hard-line government of President Ebrahim Raisi, growing closer to nuclear weapons capability, according to U.S. officials. Psaki said Iran had failed to provide constructive proposals while in Vienna.

“Back almost to square one” is how a senior European diplomat characterized the state of negotiations to one journalist.

Psaki also said former President Donald Trump was to blame for Iran’s nuclear advancements because of his withdrawal from the Joint Comprehensive Plan of Action, as the Obama-era deal is formally known.

“The previous administration decided to withdraw from the JCPOA — that’s led to a dramatic and unprecedented expansion of Iran’s nuclear program,” she said.

But for months after taking office, the Biden administration said Iran should take the first move in returning to the pact. Top aides called for a “longer and stronger” deal, one that stopped Iran from acquiring nuclear materials for decades and halted missile launches and support for terrorist groups.

Asked by the Washington Examiner in February whether a return to compliance by Iran was a precondition for returning to talks, Psaki reaffirmed that no sanctions relief or talks would begin without Iran first returning to the pact.

“Certainly [compliance] would be the first, next step in the process,” she said at the time.

In recent months, top Biden officials have said Iran’s uranium enrichment and failure to engage constructively in the negotiations will force the U.S. to curtail the program through alternative measures.

“What Iran can’t do is sustain the status quo of building their nuclear program while dragging their feet on talks,” Secretary of State Antony Blinken said this week. “That will not happen. That’s also not our view alone.”

U.S. and Russian officials plan to extend a diplomatic process focused on European security matters, a prospect that could avert the looming threat of an expanded Russian invasion of Ukraine.
FOREIGN POLICY・1 DAY AGO
WashingtonExaminer

Everything the White House Has Said About Russia, Ukraine in the Past 24 Hours

Comments made by President Joe Biden during his Wednesday address raised eyebrows regarding potential U.S. interference.
POTUS・2 DAYS AGO

The U.S. said it would provide written responses to Russian security demands amid soaring tensions over its military build-up by Ukraine.
POTUS・1 DAY AGO
NBC News

As part of an effort to revive the international nuclear deal with Iran, Russia has discussed a possible interim agreement with Iran in recent weeks that would involve limited sanctions relief in return for reimposing some restrictions on Tehran’s nuclear program, according to two U.S. officials, one congressional official, one former U.S. official and four other people familiar with the discussions.
POLITICS・1 DAY AGO
kfgo.com

GENEVA (Reuters) – U.S. Secretary of State Antony Blinken said he discussed Iran on Friday with Russian Foreign Minister Sergei Lavrov, warning there was only a brief window to bring talks to save the 2015 Iran nuclear deal to a successful conclusion. Blinken told reporters the deal was an...
WORLD・1 DAY AGO
POLITICO

Press secretary Jen Psaki said the U.S. response to an invasion would be “swift, severe, and united,” after the president said it would depend on the severity of Russia’s actions.
POTUS・2 DAYS AGO

US Secretary of State Antony Blinken and European allies insisted it was still possible to revive the Iran nuclear deal but said "time is running out", after talks in Berlin Thursday. Blinken told reporters that negotiators working in Vienna to salvage the 2015 accord with Tehran had seen "modest progress in the last couple weeks" but were taking nothing for granted. "My own assessment, talking to all of our colleagues, is that returning to mutual compliance, it remains possible," Blinken said. Speaking at a joint news conference, German Foreign Minister Annalena Baerbock said "urgent progress" was needed in talks aimed at rescuing the deal.
WORLD・2 DAYS AGO
WashingtonExaminer

IF AT FIRST YOU DON’T SUCCEED: This morning in Geneva, Switzerland, U.S. Secretary of State Antony Blinken and Russian Foreign Minister Sergey Lavrov are giving diplomacy another go in an effort to defuse the crisis created by Russia’s massing of an estimated 100,000 troops on the border of Ukraine.
POLITICS・2 DAYS AGO
The Guardian

The countdown to the end of the six-month-long talks in Vienna on the future of the Iran nuclear deal has begun. No deadline has been formally set, but if there is no progress in less than two weeks the process will come to an end leaving a dangerous vacuum. The...
MIDDLE EAST・6 DAYS AGO

TEHRAN, Jan. 15 (Xinhua) -- Chief negotiators of Iran and three European countries on Friday temporarily returned to their capitals for consultations as expert talks continue, providing the latest evidence that international talks to salvage the Iranian nuclear deal in Vienna have been moving forward. The return of chief negotiators...
MIDDLE EAST・7 DAYS AGO
AFP

There are only "a few weeks left" to save the Iran nuclear deal, and the United States is ready to look at "other options" if negotiations fail, Secretary of State Antony Blinken said Thursday. "We have, I think, a few weeks left to see if we can get back to mutual compliance," Blinken said in an interview with US public radio station NPR. "We're very, very short on time," because "Iran is getting closer and closer to the point where they could produce on very, very short order enough fissile material for a nuclear weapon," he said.
U.S. POLITICS・9 DAYS AGO
WashingtonExaminer

The Biden administration said it had no further meetings planned with the Kremlin after talks over Russia’s troop buildup on Ukraine’s border ended this week with no clear path forward.
POTUS・9 DAYS AGO
Axios

Ahead of Iran deal decision, White House to "focus the fire on Trump"

The White House has ratcheted up blame on former President Donald Trump for his decision to leave the Iran nuclear deal as negotiators wade through the eighth round of talks with no clear progress.
POTUS・10 DAYS AGO
Reuters

PARIS, Jan 11 (Reuters) - Iran and world powers are still far from any agreement to revive their 2015 nuclear deal despite making some progress at the end of December, France's foreign minister said on Tuesday. Indirect talks between Iran and the United States on salvaging the 2015 Iran nuclear...
MIDDLE EAST・11 DAYS AGO
Reuters

Israel not bound by any nuclear deal with Iran, Bennett says

JERUSALEM, Jan 10 (Reuters) - Prime Minister Naftali Bennett said on Monday that Israel would not be bound by any nuclear deal with Iran and would continue to consider itself free to act "with no constraints" against its arch-foe if necessary. Indirect talks between Iran and the United States on...
MIDDLE EAST・13 DAYS AGO
Newsweek