Davis vs. Cruz: How to Watch the WBA Lightweight Championship Fight

By Danielle Directo-Meston
The Hollywood Reporter
2021-12-03 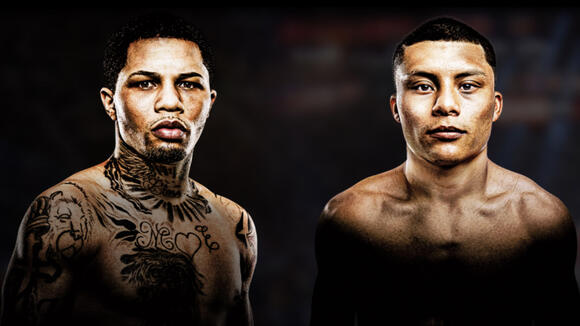 Gervonta “Tank” Davis will defend his lightweight title against Mexico’s Isaac “Pitbull” Cruz when the two go head-to-head this weekend at the Staples Center in Los Angeles. The Baltimore-born, five-time world champion is a Floyd Mayweather protégé, and boxing fans are expecting a dramatic 12-round bout between him and his 23-year-old challenger, who has 17 straight wins under his belt.

The fight card also includes a super welterweight matchup between Sebastian Fundora and Sergio Garcia, a featherweight bout between Sergiy Derevyanchenko and Carlos Adames and a 10-round featherweight fight between Eduardo Ramirez and Miguel Marriaga.

With 25 wins and zero losses, the undefeated Davis was originally scheduled to fight against interim champion Rolando Romero, who was replaced by Showtime following a sexual assault allegation, per ESPN .

How to Watch Davis vs. Cruz Fight Online

The only way to watch the Davis vs. Cruz WBA fight online is by streaming via pay-per-view (PPV) on Showtime. The PPV fee is $75 and doesn’t include or require a Showtime subscription. You can stream the event on most iOS or Android devices with the Showtime app, including smart TVs (excluding LG and Samsung TVs), smartphones and tablets, or you can cast it from your phone to a TV using Apple TV, Chromecast, a Roku or Amazon Fire TV stick, and other devices. Viewers can also use a desktop computer to stream on the latest versions of Chrome, Firefox, Safari or Windows Edge browsers. Mobile web browsers are not supported, and the live event can only be streamed on one device at a time.

How to Get Tickets to Davis vs. Cruz

If you want to watch Davis vs. Cruz live at the Staples Center in Los Angeles, tickets are still available on SeatGeek , StubHub and VividSeats starting at $76 and up as of press time. The venue’s COVID-19 safety protocols require that all guests ages 2 and up wear a face mask when not actively eating or drinking, and provide either a negative PCR or antigen test within 72 hours of the event or proof of full vaccination (two weeks since your final dose)

The 64th annual Grammy Awards ceremony has a new date — and a new location. News came Tuesday that the show has been rescheduled and will now broadcast live from the MGM Grand Garden Arena in Las Vegas on Sunday, April 3, from 8-11:30 p.m.  on CBS (it also will be available to stream live and on demand on Paramount+). It’s the first time the show will take place in Vegas. The show was postponed earlier this month amid the omicron surge from its original date of Jan. 31. It was scheduled to take place at the Crypto.com Arena (formerly known as...
LAS VEGAS, NV・1 DAY AGO
The Hollywood Reporter

Lusia Harris, First Woman Drafted by NBA and Subject of ‘The Queen of Basketball,’ Dies at 66

Lusia “Lucy” Harris, subject of this year’s Oscar-shortlisted documentary short The Queen of Basketball and a trailblazer in the sport, died Tuesday in Mississippi. She was 66. Her family confirmed her unexpected passing in a statement, and details were not provided about the cause of death. Their message highlighted the recent uplifting moments she had experienced, as the Ben Proudfoot-directed film, part of the New York Times Op-Docs series and counting Shaquille O’Neal as an executive producer, had been a source of new fans for Harris. “The recent months brought Ms. Harris great joy, including the news of the upcoming wedding of...
NBA・1 DAY AGO
BoxingNews24.com

By Allan Fox: Gervonta ‘Tank’ Davis’ trainer Calvin Ford says they’re waiting for a mega-fight with Vasily Lomachenko and he thinks it’ll be a huge contest when it happens. Davis could have fought Lomachenko years ago, but his promoter Floyd Mayweather Jr. hasn’t chosen to...
COMBAT SPORTS・2 DAYS AGO
Las Vegas Herald

Former multiple-time UFC title challenger Chael Sonnen has been served with five battery citations stemming from a recent incident in which he allegedly beat up five separate people during a furious row in a Las Vegas hotel. Retired fighter Sonnen, 44, who has become one of mixed martial arts' more...
LAS VEGAS, NV・29 DAYS AGO

Boxing legend Mike Tyson has dismissed reports that he has reached a ‘verbal agreement’ over a lucrative super-fight with YouTuber-turned-boxer Jake Paul. The 55-year-old American superstar made his blockbuster return to the squared circle against fellow boxing legend Roy Jones Jr in an eight-round exhibition fight. Tyson had...
COMBAT SPORTS・1 DAY AGO
The Independent

A potential fight between Mike Tyson and Jake Paul in Las Vegas is unlikely to be sanctioned.Former UFC champion Michael Bisping believes that strict rules set by the Nevada State Athletic Commission mean that an exhibition encounter will not be licensed. Paul and Tyson are said to be in discussions over a bout, with organisers hoping a clash between the Youtube personality and former undisputed heavyweight champion could generate £36million if held in the American city.Yet Bisping, a former UFC middleweight champion, does not think it would be approved even as reports suggest a verbal agreement between the pair may...
COMBAT SPORTS・20 HOURS AGO
Robb Report

The robe Muhammad Ali wore before one of the most important fights of his career could soon be yours. The garment the Greatest wore to the final weigh-in and while walking out for his 1965 fight with Sonny Liston is currently up for sale on Goldin Auctions. The robe isn’t just noteworthy because it was worn before the boxer’s second heavyweight title bout, but also because it’s the first that bore the name he’d go by for the final 52 years of his life. Ali wore the robe, which is made of white terry cloth and has “Muhammad Ali” stitched in red...
COMBAT SPORTS・1 DAY AGO
Sportsnaut

Many UFC fans have likely been typing Nate Diaz next fight recently in their MMA Google searches, as they wonder
UFC・12 HOURS AGO

Tyson Fury has mocked Anthony Joshua and maintains Oleksandr Usyk will “smash” him in their heavyweight world title rematch.Joshua is still destined for shot at winning back the WBA (Super), WBO and IBF titles that Usyk took back in September last year.While Fury continues to wait for the politics of the sport to play out ahead of a probable mandatory title defence against Dillian Whyte, despite purse being bids delayed again.But despite no prospect of Fury and Joshua fighting any time soon, Fury reacted angrily after Derek Chisora tipped Joshua to beat him, with the WBC title holder maintaining...
COMBAT SPORTS・1 DAY AGO
Cassius

"You ain't trying to hot box with me, I swing hard liquor Going down by the second round, all hail the underground" Xzhibit, "Bitch Please"
COMBAT SPORTS・1 DAY AGO
The Independent

Francis Ngannou is a fighting phenomenon: the honorary ‘baddest man on the planet’ as UFC heavyweight champion, and the most ferocious power-puncher in the promotion’s history.The French-Cameroonian’s professional mixed martial arts record stands at 16-3, while his UFC record is 11-2 since his debut in 2015 – with 10 of those wins coming via knockout or TKO.Ngannou, 35, in fact went 6-0 in the company, with five of those victories achieved via KO/TKO and one coming via submission, before he suffered back-to-back decision losses.The first of those two defeats was a humbling by then-champion Stipe Miocic, but Ngannou worked...
UFC・2 DAYS AGO
HollywoodLife

Floyd Mayweather Remembers Ex Josie Harris Nearly 2 Years After Death: ‘These Females Will Never Be You’

A day after what would have been Josie Harris’s 42nd birthday, Floyd Mayweather celebrated his late ex with a loving message about how he’ll love her ‘forever.’. Ahead of the second anniversary of Josie Harris’s untimely death, Floyd Mayweather posted a tribute to his late ex-girlfriend. “These females will never be you, Josie,” Floyd, 44, captioned a Jan. 18 Instagram post, one that showed a photo of his ex and mother of his children, Zion, Jirah, and Koraun. Floyd also praised Josie’s natural beauty. “No veneers, No lip injections, no nose job and No fillers. ALL NATURAL 1 of 1….Love You Forever!!”
LOS ANGELES COUNTY, CA・15 HOURS AGO

Francis Ngannou would relish the opportunity to go head-to-head with Tyson Fury in his next fight.The 35-year-old UFC heavyweight champion faces former team-mate Ciryl Gane in a unification bout in Anaheim California at the weekend, but would take to the octagon with WBC champion Fury having challenged him to a contest wearing MMA’s lighter gloves.Asked if everything goes to plan against Gane whether he would rather face him or defend his title against Jon Jones in his next fight, the Predator told a press conference: “If you give me the two options, I would choose fighting Tyson Fury.One of...
UFC・12 HOURS AGO
The Spun

Bad news, Lakers fans. Rob Pelinka and Co. probably won’t be able to make any worthwhile trades ahead of the deadline, per a new report. On Tuesday, NBA insider Adrian Wojnarowski offered a glum outlook on the Lakers during an appearance on ESPN’s NBA Today. The Lakers, who...
NBA・1 DAY AGO
Sports Illustrated

Moxley will make his return on Wednesday’s “Dynamite”, his first televised appearance in more than two months.
WWE・1 DAY AGO
dexerto.com

UFC 270 - Ngannou vs Gane: When is it, where is it, how to watch in Australia, full fight card and betting odds

The first UFC title unification bout of 2022 will take place this weekend, with Francis Ngannou and Ciryl Gane fighting it out for the heavyweight championship. Here is everything you need to know ahead of a big night of UFC action. When is UFC 270?. UFC 270 will take place...
UFC・2 DAYS AGO
CNET

It's 2022 and the UFC's first PPV card of the year is almost here! UFC 270 is a big one, featuring Francis Ngannou vs. Ciryl Gane for the heavyweight title, an incredible fight that's a real, proper 50/50 pick em. It also plays host to a flyweight title fight in the co-main between Brandon Moreno and Deiveson Figueiredo. This will be the third contest between the two. The previous two were both barn burners, so expect greatness.
UFC・1 DAY AGO
Footwear News

Ahead of his heavyweight clash at UFC 270 against Ciryl Gane, Gymshark has revealed a compelling community-focused campaign starring its sponsored power-punching champion Francis Ngannou. The effort, dubbed “United We Sweat,” highlights the shared values between the company and the Cameroon-born mixed martial artist, which is fostering and celebrating community. The first standalone campaign for Ngannou also offers a message of uniting, touches on the power of perseverance and puts the focus on the fighter’s mindset as he heads into the biggest fight of his career. ​​ “Obviously the brand is quality, and the material is very good, I personally use the...
UFC・12 HOURS AGO
San Diego Union-Tribune

Golf goes to Netflix and it has competition from tennis

Formula One racing got a huge boost in interest in North America through the Netflix series "Drive to Survive."
TENNIS・1 DAY AGO