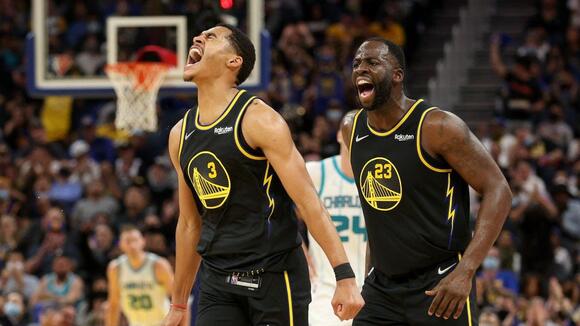 Back on Nov. 3, with 3:10 left in the first half against the Charlotte Hornets, Jordan Poole curled off of a screen and momentarily bobbled a chest-high pass on the wing. He calmly regathered, locked the basketball into his shooting pocket, and buried what was his fourth 3-pointer in three minutes. The entire time, his eyes never left the rim. After hitting the shot, Poole let out a full-throated roar and gallivanted across the Chase Center court. He basked in his moment of glory like a gladiator in front of a cheering coliseum.

Poole has given the Golden State Warriors and its fans plenty of these moments throughout their 18-3 start. However, most wonder how many more he will have after Klay Thompson returns from his two-year hiatus sometime this month. Like his impending replacement, Poole is an (occasionally overly) confident shooter and a silky-smooth scorer. Poole has improved dramatically and demonstrated this season that no matter how his role changes moving forward, he will not need to sacrifice anything.

Since that night, Poole has averaged 20.3 points on 47.5 percent shooting in 31.5 minutes across 15 games. He gives the Warriors a second playmaker who can be a go-to scorer on any given night. He's now led Golden State in scoring six times after dropping an efficient 28 points in the Phoenix loss on Tuesday. But where will he fit when Klay returns? On Wednesday, team leader Draymond Green offered an answer via his podcast “The Draymond Green Show" from the iHeart radio network.

“Whether Jordan coming off the bench or starting, he’s going to play 30 minutes a night,” Green said.

Poole is averaging 30.4 minutes and 14.6 shot attempts per game this season. He has had success this season because of his aggression, do not expect that to change.

Thompson went through a similar line of questioning in 2016 after the addition of Kevin Durant and his response was legendary : “I’m not sacrificing s--t.”

He was true to his word. Thompson averaged more shot attempts in 2016-17 (17.6) as he did in 2015-16 (17.3) and was just as efficient. Perhaps that’s why Thompson has publicly encouraged Poole to maintain his identity. On November 22, Klay tweeted this in response to ESPN’s SportsCenter account about Poole’s statistical ascent:

Another guide to aid Poole along his perceived path of relegation is Andre Iguodala. Not only as a veteran with 17-plus years of wisdom to pass down, but as someone who has made the most out of taking a step back. Iguodala was just as (if not more) impactful being the sixth man for the Warriors title teams after starting every game his first season in Golden State. Now, Iguodala can be a unique resource for Poole if (or when) he feels lesser in his new role.

There will be some games, as there are now, when Poole’s light is a little too green. Forced or early shots are inevitable with his gunslinging disposition, which leads to empty possessions. He occasionally over-dribbles and gets caught trying to pass out of ill-advised drives. He yells at officials when a call doesn’t go his way. He plays with emotion, which can be both destructive and advantageous. But Poole is 22 years old. All of his current mistakes should help him in the future. He’s already grown so much in a short period. This season, Poole has already scored 20-plus points in eight games after doing it nine times in 51 contests last year.

Plus, Poole’s constant pressure on opposing defenses has added a beneficial dynamic. Last season, it was Stephen Curry versus the world. Now, Curry has another playmaker who can get his shot. Just because Thompson is returning, likely to the starting lineup, does not mean Poole won’t see the floor with Curry. A three-guard lineup of Curry, Thompson, and Poole gives Golden State maximum offensive potential. Then, as the leader of the second unit, Poole will have a freer reign as the leading scorer. The Warriors generally struggle when Curry rests, but Poole can help them sustain and perhaps extend leads. He takes over for stretches and can also finish games. Golden State has plenty of ways to use Poole, which helps far more than it hurts.

Some nights, Poole will get the 30 minutes Draymond estimated. Either way, it is hard to envision Poole changing his attitude (or shot selection) on the court. His tunnel vision makes him a lethal option on offense. Although he has not said it publicly, it’s difficult to see Poole changing his mindset. He is who he is. So far, that has helped the Warriors back into title contention. Poole has no reason to change, even when Thompson returns.

Steph Curry has been ruled out for Sunday's game between the Golden State Warriors and Minnesota Timberwolves.
NBA・2 DAYS AGO
ClutchPoints

The Golden State Warriors are definitely glad that Klay Thompson has finally returned after over 900 days of absence from NBA action, though, they are still waiting for the former Washington State Cougars to shoot like his old self. According to ESPN Stats & Info, Thompson has yet to shoot better than 40 percent from the field in any of his first games since making his way back to active duty.
NBA・19 HOURS AGO
ESPN

MINNEAPOLIS -- — Karl-Anthony Towns had 26 points and 11 rebounds to lead the Minnesota Timberwolves to a 119-99 victory over the worn-out Golden State Warriors, who played without Steph Curry and Draymond Green on Sunday night. Jaylen Nowell scored 17 points and Malik Beasley added in 16 with...
NBA・1 DAY AGO
Sportsnaut

Karl-Anthony Towns put up a 26-point, 11-rebound double-double, and the host Minnesota Timberwolves took advantage of the absence of Golden
NBA・1 DAY AGO
ClutchPoints

Detroit Pistons legend Isiah Thomas recently speculated about what it would be like if star players from today’s NBA were inserted into the league in the 1980s and 1990s. Thomas explained that players like Los Angeles Lakers superstar LeBron James and Brooklyn Nets superstar Kevin Durant would pose massive issues for anyone hoping to stop them in that era.
NBA・2 DAYS AGO
fadeawayworld.net

The Los Angeles Lakers were a hot destination in free agency. Over the summer, multiple players flocked to the team to chase a title alongside LeBron James in the NBA's biggest market. But since the start of the season, things have been less than ideal for the Lakeshow. Through the...
NBA・2 DAYS AGO

Trae Young and the Atlanta Hawks started this season by absolutely dominating Luka Doncic and his Dallas Mavericks in the first game. Things were looking great for the 2021 Eastern Conference finalists and it looked like they would have another successful season. However, things fizzled out and they went 3-5 in their next 8 games after the win.
NBA・1 DAY AGO
FastBreak on FanNation

The Brooklyn Nets have barely had their “Big Three” on the floor together since they assembled what they thought would be a championship roster, and one of their superstar players is reportedly open to the idea of moving on. NBA reporter Marc Stein wrote on Monday that sources...
NBA・9 HOURS AGO
FastBreak on FanNation

Kevin Durant injured his knee during the game between the New Orleans Pelicans and Brooklyn Nets.
NBA・2 DAYS AGO

Kyle Kuzma threw down a huge dunk on Joel Embiid during the game between the Philadelphia 76ers and Washington Wizards on Monday afternoon.
NBA・12 HOURS AGO
FastBreak on FanNation

Rajon Rondo has been ruled out for the game between the Cleveland Cavaliers and Oklahoma City Thunder on Saturday night.
NBA・2 DAYS AGO
Chicago Tribune

DeMar DeRozan seemed poised for another miracle with the final handful of seconds ticking off the clock in Boston on Saturday night. DeRozan already had scored 14 points in the fourth quarter to lead a short-handed Chicago Bulls team within punching distance of the Celtics. He already had dished a pass to Nikola Vučević for a wide-open 3-pointer to take the lead, then launched himself inside ...
NBA・2 DAYS AGO
fadeawayworld.net

Michael Jordan Didn't Want To Say He Was Better Than Magic Johnson And Larry Bird: "We Never Had The Opportunity To Play Against Each Other In Peak Years. I Like To Consider Myself Parallel To Them."

Michael Jordan, for many fans, is the greatest player in NBA history. What he was able to achieve through the course of his legendary career is nearly unparalleled. Not only was Jordan widely successful as a player. He was also an icon that helped the NBA reach heights that it had never seen before. But there are two stars that MJ could never put himself above.
NBA・21 HOURS AGO
fadeawayworld.net

Former NBA Player Says Playing In Europe Is Tougher Than Playing In The NBA: "There Are Many Rules. That's Why Players Are Constantly Changing Places. Scoring Is Easier In The NBA."

Durant sustained the injury in the second quarter of Brooklyn's eventual win over the Pelicans.
NBA・1 DAY AGO
FastBreak on FanNation

Cade Cunningham was ejected during the game between the Phoenix Suns and Detroit Pistons on Sunday afternoon in Michigan.
NBA・1 DAY AGO
FastBreak on FanNation

The Nets Have Given A Kevin Durant Injury Update

Kevin Durant injured his knee in Saturday's game between the New Orleans Pelicans and Brooklyn Nets. On Sunday, after Durant got an MRI, the Nets gave an update on their All-Star forward.
NBA・1 DAY AGO