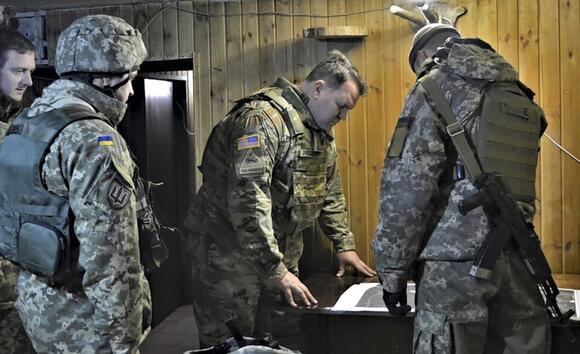 The White House declined to rule anything out in response to Russian advances along Ukraine's border, including some form of military action.

The Biden administration is preparing "for a range of options," press secretary Jen Psaki said Friday. Asked whether this could include a military response, Psaki declined to say.

"I'm not going to outline them in more detail from here," she told reporters.

KAMALA HARRIS BRACES FOR LOSS OF ANOTHER TOP AIDE

"We can't predict from here what President Putin's calculus is or what the Russians' calculus is," Psaki said. "We saw what they did in 2014 [and] we've seen what they're doing on the border."

Russian forces have amassed along Ukraine's eastern borders and have annexed Crimea in addition to at least two separatist-held regions in its eastern part, stoking concerns that it is preparing to invade Ukraine.

President Joe Biden said Friday that he was compiling measures to halt a potential incursion. He also said he was in "constant contact" with Ukrainian leaders and European allies over the threats.

"We've seen this playbook before," said Secretary of State Antony Blinken, referring to Russia's 2014 annexation of the Crimean peninsula.

Secretary of Defense Lloyd Austin said Wednesday that any military action in response to a Russian incursion should be undertaken "as a part of an international community."

Economic sanctions are one option in "a range of tools," Psaki said.

Biden and Russian President Vladimir Putin are expected to speak soon, with Psaki telling reporters that the call would be an opportunity "to discuss our serious concerns about the bellicose rhetoric about the military buildup."

Kremlin foreign policy adviser Yuri Ushakov had said the call would take place next week and that a date had been agreed upon but would not be announced until details of the talks were confirmed.

Russia is seeking legally binding security guarantees against NATO expansion and for the military alliance to stay out of Ukraine.

Asked whether the United States was prepared to commit to Russia's requests, Psaki said some decisions weren't up to Washington.

"NATO member countries decide who is a member of NATO, not Russia. And that is how the process has always been and how it will proceed," she said. "It's important to remember where the provocative action is coming from. … It's not the United States [and] it's not Ukraine."

The White House chose not to comment directly on Supreme Court Justice Stephen Breyer's plans to retire but said President Joe Biden stands by his 2020 campaign promise to nominate a black woman to sit on the nation's highest court if given the chance.
PRESIDENTIAL ELECTION・1 HOUR AGO
WashingtonExaminer

U.S. Ambassador to Russia John Sullivan delivered a written response to Russia’s recent demand that NATO agree never to allow another country to join the alliance and roll back security assistance with Eastern European allies, as American officials attempt to launch a confidential dialogue with Moscow.
FOREIGN POLICY・2 HOURS AGO
WashingtonExaminer

Ukrainian views ‘incorporated' into US written response to Russia

President Joe Biden’s administration has “incorporated” Ukrainian government views into a forthcoming written response to Russia’s ominous demand for a ban on NATO expansion and a contraction of trans-Atlantic security arrangements from Eastern Europe.
POLITICS・22 HOURS AGO
Newsweek

McConnell said he's heard "encouraging" things about what the Biden administration plans to do about the Russian invasion threat.
POTUS・1 DAY AGO
Newsweek

Separatists in the Donbas region say Kyiv has built up military hardware as President Joe Biden seeks to present a united front against Russia.
POLITICS・1 DAY AGO
POLITICO

‘We have a sacred obligation’: Biden threatens to send troops to Eastern Europe

The Ukrainian government says Russia has spread "a large amount of misinformation, manipulation and fakes" to sow panic among Ukrainians and foreigners.
POLITICS・1 DAY AGO

‘Enormous consequences’ if Russia invades Ukraine – as it happened

In the ongoing conflict between Russia and Ukraine, Russian President Vladimir Putin’s eyes are on a bigger prize, a top expert on Putin and his country says. “This time,” writes former intelligence officer Fiona Hill in a New York Times op-ed, “Mr. Putin’s aim is bigger than closing NATO’s ‘open door’ to Ukraine and taking more territory — he wants to evict the United States from Europe. As he might put it: ‘Goodbye America. Don’t let the door hit you on the way out.’ ”
POLITICS・2 DAYS AGO
The Independent

Tensions continue to mount along Russia’s border with Ukraine, where Moscow has been building up its military presence, estimated to amount to around 106,000 soldiers.Russian president Vladimir Putin has denied he has any intention of invading the neighbouring state but has presented the West with a series of demands, including an end to the eastern expansion of Nato membership to ex-Soviet states and the curtailment of US and Nato military activity on Russia’s doorstep.Nato has said it is sending additional ships and fighter jets to its deployments in eastern Europe, while the US and UK are withdrawing diplomats’ families...
POLITICS・2 DAYS AGO
Reuters

WASHINGTON, Jan 25 (Reuters) - U.S. Senate Republican Leader Mitch McConnell, a frequent critic of President Joe Biden, said on Tuesday that he is seeing "encouraging" signs from the administration about its approach to deterring further Russian aggression towards Ukraine. McConnell said Biden now appears to be adopting the right...
FOREIGN POLICY・1 DAY AGO

Greene claimed Biden had been "playing cover" for his son since he was Obama's VP, continuing baseless claims of corruption.
PRESIDENTIAL ELECTION・7 HOURS AGO
WashingtonExaminer

President Joe Biden is having trouble hiding his frustration with reporters as pressure mounts on him at home over his stalled legislative agenda and abroad due to escalating Russia-NATO tensions over Ukraine.
PRESIDENTIAL ELECTION・10 HOURS AGO
USA TODAY

US responds to Russia's demands and doesn't yield on Ukraine and NATO: What to know

US puts 8,500 troops on heightened alert amid Russia tension

At President Joe Biden's direction, the Pentagon is putting about 8,500 U.S.-based troops on heightened alert for potential deployment to Europe to reassure allies amid rising fears of a possible Russian military move on Ukraine.
MILITARY・1 DAY AGO

The first shipment of the United States’ $200 million security support package for Ukraine has arrived in Kiev as tensions grow over the prospect of Moscow invading its neighbour with tens of thousands of Russian troops gathered at the border. High-level talks took place beteen US and Russian ministers last week while President Joe Biden ramped up his rhetoric to urge Russia’s Vladimir Putin not to attack Ukraine.Mr Biden initially said last week: “It’s one thing if it’s a minor incursion and we end up having to fight about what to do and what to not do, etcetera,” before...
FOREIGN POLICY・2 DAYS AGO
digg.com

US President Joe Biden said Putin and Russia would face "enormous consequences" if they invaded Ukraine. While Russia has pointed fingers at the US and other nations for "escalating tensions" between them and Ukraine — where the Russians currently have troops stationed near the south-western border — the Kremlin wants assurances from NATO that they will not add more nations, such as Ukraine, to their alliance. The UK Foreign Minister Liz Truss agreed with Biden and said sanctions on banks, business and people could become a reality if an invasion takes place.
POLITICS・5 HOURS AGO
Newsweek