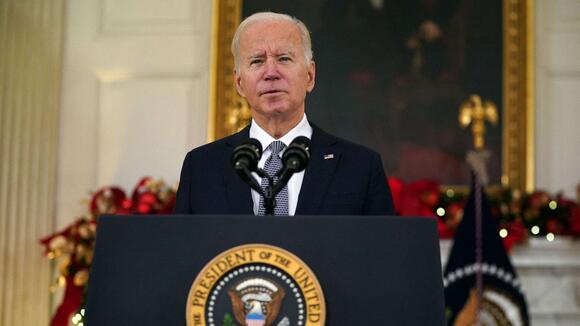 President Joe Biden has signed a short-term funding bill to keep the government open until Feb. 18, 2022, narrowly averting a shutdown that loomed for Friday, the White House said.

At the top of earlier remarks on the November jobs report Friday, Biden teased he would sign the bill before heading to Camp David for the weekend and said the action represents the "bare minimum" of what Congress should do.

"Funding the government isn't a great achievement, it's a bare minimum of what we need to get done," he said.

The president also thanked House Speaker Nancy Pelosi and Majority Leader Chuck Schumer for their leadership on getting the bill passed and called for them to start working now on a full-year funding bill.

"In these times, a bipartisan cooperation is worth recognition. So I want to thank Speaker Pelosi and Schumer getting this done. And I want to urge Congress to use the time this bill provides to work toward a bipartisan agreement on a full-year funding bill that makes the needed investments in our economy and our people," he said.

Both chambers of Congress passed the continuing resolution on Thursday that will kick the can of keeping the government open down the road until mid-February, averting a shutdown even after a small group of Senate Republicans threatened to stall the legislation in protest of Biden's vaccine mandate for federal workers.

The small contingent of GOP senators, fronted by Sen. Mike Lee, R-Utah, insisted that the Senate consider an amendment to the stopgap funding bill that would have effectively zeroed out funding to support the mandate.

MORE: If there's a government shutdown, here's what you need to know

Debate between Senate leaders about whether to allow such a vote nearly ground the upper chamber to a halt and threatened to cause time-consuming procedural delays that would have led to a temporary shutdown -- but late Thursday night, a deal was reached to allow a vote on the amendment and on final passage.

"I am glad that in the end cooler heads prevailed. The government will stay open and I thank the members of this chamber for walking us back from the brink of an avoidable needless and costly shutdown," Schumer said just before the votes were taken.

Efforts to strip funds for the mandate failed, with two Republicans absent for the vote, but the short-term spending bill passed. Nineteen Republicans including Senate Majority Leader Mitch McConnell voted with Democrats after the House approved the bill largely along party lines -- other than the support of a single Republican, retiring Rep. Adam Kinzinger, R-Ill.

Sometime next week, the Senate will take another vote on overturning Biden's vaccine mandate. The effort has been backed by moderate Democrat Sen. Joe Manchin of West Virginia and is expected to pass the upper chamber, though it likely won't get a vote in the Democrat-controlled House.

To avert a future shutdown, Congress will need to pass another short-term spending bill before Feb. 18 or pass a package of large appropriations bills that have been caught up in negotiation for months.

"We need you guys to step up to the plate, Lindsey Graham, and tell us who you are," Bannon said while calling for the unmasking of five "traitor" GOP senators.
CONGRESS & COURTS・1 DAY AGO
Newsweek

"Black people voting is simply not a priority for Biden, Manchin or Sinema," the radio host said on his Thursday broadcast.
PRESIDENTIAL ELECTION・18 HOURS AGO
Business Insider

A $1.8T Build Back Better compromise Manchin offered the White House in December is off the table. "We'll just start with a clean sheet of paper."
PRESIDENTIAL ELECTION・1 DAY AGO
Business Insider

The revival of the expanded child tax credit has been thrown into serious jeopardy due to resistance from Sen. Joe Manchin.
INCOME TAX・2 DAYS AGO

Democrats attempted to change the filibuster in order to pass voting rights legislation in the Senate this week.
CONGRESS & COURTS・22 HOURS AGO
Newsweek

The veteran Democrat said African Americans were "quite aggrieved" by new voting restrictions across the country.
CONGRESS & COURTS・3 HOURS AGO
Newsweek

Pelosi defended congressional stock trading, stating that the U.S. is a "a free-market economy" and that lawmakers "should be able to participate in that."
POTUS・2 DAYS AGO
Virginia Mercury

WASHINGTON — A bipartisan group of senators is exploring legislation to overhaul how Congress counts Electoral College votes, but backers of stalled voting rights legislation are lukewarm on the effort as a substitute. The Electoral Count Act is an obscure law that has come under recent scrutiny, a year after the Jan. 6 attack on the U.S. Capitol […] The post With voting rights stalled, some senators mull an update to the Electoral Count Act appeared first on Virginia Mercury.
PRESIDENTIAL ELECTION・19 HOURS AGO

Jan 21 (Reuters) - Several U.S. House members from President Joe Biden's Democratic Party are threatening to block a renewed push for his Build Back Better spending bill if it does not include the expansion of a federal deduction for taxes paid to states and local entities. Expanding the deduction,...
INCOME TAX・19 HOURS AGO
POLITICO

Liz Cheney is aware, and finds it "concerning" that the Wyoming GOP chief aiding her party's bid to unseat her is an alleged member of the far-right Oath Keepers.

Cheney faces a Republican primary challenge from Donald Trump-backed Harriet Hageman. Microcosm alert: Rep. Liz Cheney (R-Wyo.) and other members of the Jan. 6 select committee are examining the role of the far-right Oath Keepers in last year's Capitol attack. Meanwhile, her own state party chair is trying to oust her from office — and is also allegedly an Oath Keepers member.
WYOMING STATE・2 DAYS AGO
San Diego Union-Tribune

Senate Majority Leader Chuck Schumer says Democrats "made progress" toward changing the Senate's filibuster rules to advance voting legislation, despite the dramatic collapse of the package that his party says is central to protecting democracy
CONGRESS & COURTS・1 DAY AGO
TIME

Late Wednesday night, Democratic Senators suffered a stinging defeat when their months-long effort to pass sweeping voting-rights reform was torpedoed by the entire Republican caucus—with help from two of their own: Democratic Sens. Joe Manchin and Kyrsten Sinema.
CONGRESS & COURTS・1 DAY AGO

Democrat Senators Joe Manchin and Kyrsten Sinema backed the GOP in rejecting tweaking the filibuster to allow voting rights legislation to pass with a majority.
PRESIDENTIAL ELECTION・2 DAYS AGO
The Independent

President Joe Biden has launched into his second year in office with a new focus on making fatigued Americans believe they’re better off under his leadership as he embraces a pared-back agenda before the midterm elections.The persistence of the coronavirus, rising inflation and congressional gridlock have exacted a bitter toll on Biden’s approval rating and threaten a midterm routing for his party, but the president sees no need for a major shift in direction.Instead, Biden told Democratic National Committee members during a virtual grassroots event Thursday that Democrats broadly have to offer a clearer contrast with Republicans going forward....
PRESIDENTIAL ELECTION・1 DAY AGO
Arizona Mirror

WASHINGTON — Every Republican in the U.S. Senate and two Democrats on Wednesday night rejected a proposed change in the filibuster to pass voting rights legislation, dealing a major blow to attempts in Congress to counter restrictive voting laws passed in the states. In a 48-52 vote, two Democrats — Sens. Kyrsten Sinema of Arizona […] The post Sinema joins Republicans to block a change in the filibuster for voting rights bills appeared first on Arizona Mirror.
PRESIDENTIAL ELECTION・2 DAYS AGO

President Joe Biden on Wednesday hit out at Republicans for acting to block his agenda without offering any alternative solutions to the problems his administration is trying to address.Speaking at a White House news conference on the eve of his one-year anniversary in office, Mr Biden told reporters he was caught off guard by the vehemence of the GOP’s opposition to anything and everything he has proposed, and by their singleminded effort to ensure his presidency fails."I did not anticipate that there would be such a stalwart effort to make sure the most important thing was that President Biden...
PRESIDENTIAL ELECTION・2 DAYS AGO
Newsweek

President Biden's approval rating has been in negative territory since August and shows little sign of improving.
PRESIDENTIAL ELECTION・7 HOURS AGO
Newsweek

The two moderate Senate Democrats joined Republicans in striking down an attempt to change the filibuster to pass voting rights legislation.
CONGRESS & COURTS・2 DAYS AGO
25 News KXXV and KRHD

President Joe Biden acknowledged Wednesday that the pandemic has left Americans exhausted and demoralized but insisted at a news conference marking his first year in office that he has “outperformed” expectations.
PUBLIC HEALTH・2 DAYS AGO