Nets' Kyrie Irving Posted A Photo To Instagram On Thursday 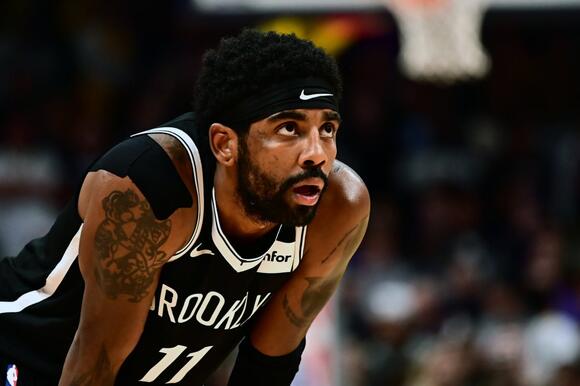 Kyrie Irving of the Brooklyn Nets posted a photo to Instagram on Thursday.

Irving is a seven-time All-Star, but has yet to play in a game for the Nets this season.

He is not eligible to play in their home games at Barclays Center in Brooklyn, New York, because of the New York City vaccine mandate.

The Nets have been able to be one of the best teams in the NBA even without their star guard, because they still have James Harden and Kevin Durant running the show.

In their first 21 games they are 15-6, which is the best record in the Eastern Conference.

James Harden has responded to reports that he is unhappy playing with the Brooklyn Nets and living in Brooklyn, stating that he is unaware of where that notion came from. “I don’t know what you talking about,” Harden said during an interview on Tuesday (Jan. 25). “I don’t know about no reports.” The claims of Harden’s alleged discontentment stem from a Bleacher Report article by contributor Jake Fischer, who reported that “multiple sources with knowledge of the situation” said while Harden “remains invested” in pursuing a title run with the Nets this season, he is looking to weigh his options following...
NBA・13 HOURS AGO
Financial World

Brooklyn Nets star guard James Harden is frustrated by Kyrie Irving's part-time status, per Jake Fischer of Bleacher Report. The New York City mandates all individuals who want to attend indoor events to be vaccinated. Irving refused to get vaccinated before the start of the season so the Nets sent...
NBA・21 HOURS AGO
94 WIP Sports Radio

James Harden reportedly intends to become an unrestricted free-agent this offseason for the first time in his career with the plan to “explore other opportunities.”
NBA・1 DAY AGO

LeBron James totaled 33 points, seven rebounds and six assists as the Los Angeles Lakers led most of the way
NBA・1 DAY AGO
Newsday

Kyrie Irving starting to find his rhythm again for the Nets

Kyrie Irving has played seven games this season since being allowed by the Nets to return as a part-time player because he is not eligible for games in New York so long as he fails to comply with the city’s vaccine mandate. But he just completed his first sustained...
NBA・2 DAYS AGO
Sportsnaut

Kyrie Irving of the Brooklyn Nets sent out two tweets on Wednesday morning.
NBA・16 HOURS AGO
FastBreak on FanNation

James Harden is questionable for the game between the Denver Nuggets and Brooklyn Nets.
NBA・9 HOURS AGO
numberfire.com

Brooklyn Nets forward DeAndre' Bembry is in the lineup Tuesday in the team's game against the Los Angeles Lakers. Bembry has been coming off the bench when the Nets are on the road, but that changes when they come back to Barclays Center. That's because Kyrie Irving is ineligible to play there due to his vaccination status. As a result, Bembry will draw the start on the wing.
NBA・1 DAY AGO
USA TODAY

The Brooklyn Nets and Denver Nuggets have announced their starting lineups.
NBA・8 HOURS AGO
ClutchPoints

With the Brooklyn Nets mired in controversy for a sizable chunk of this turbulent season, there came some pretty reassuring James Harden news for fans just before the tipoff of their home game versus Nikola Jokic and the Denver Nuggets. By now you have probably been inundated with the many...
NBA・8 HOURS AGO
FastBreak on FanNation

Nets Starting Lineup Against The Lakers

The Brooklyn Nets have announced their starting lineup for Tuesday's game against the Los Angeles Lakers.
NBA・1 DAY AGO
FastBreak on FanNation

Nets Injury Report Against The Nuggets

The Brooklyn Nets are hosting the Denver Nuggets on Wednesday night at Barclays Center.
NBA・10 HOURS AGO
charlottenews.net

The wife of NBA legend Steph Curry has called the gossip 'ridiculous'. The wife of Golden State Warriors star Steph Curry, Ayesha, has addressed rumors that the couple is in an open relationship, labeling the speculation 'disrespectful'. Claims circled on gossip blogs in recent weeks and cited an anonymous tip...
CHARLOTTE, NC・15 DAYS AGO
fadeawayworld.net

LeBron James has been one of the best players in NBA history throughout his career. James entered the NBA as just a teenager and has been spectacular for the entire time he has been in the league. James has been a great scorer for his entire career, and he is very close to a historic milestone.
NBA・22 HOURS AGO
ClutchPoints

Austin Reaves looked confused, and perhaps frustrated, as he tried to follow LeBron James' instructions during Tuesday's win over the Nets.
NBA・17 HOURS AGO