‘This is getting ridiculous’: AOC and progressive lawmakers urge Biden to act on ‘crushing’ student debt 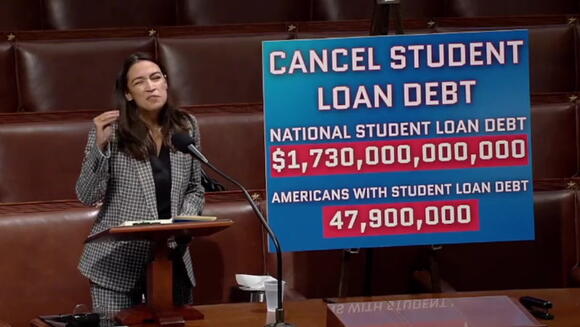 Progressive lawmakers took to the floor of the House of Representatives on Thursday to demand President Joe Biden cancel student loan debt, which has ballooned to more than $1.8 trillion held among 45 million Americans.

Payments on federal student loans have been paused with interest rates set to zero per cent with passage of coronavirus relief legislation in March 2020. That pause was repeatedly extended, but it will come to an end in January 2022, following nearly two years of dramatic financial relief for millions of Americans during the public health crisis and its economic fallout.

Most of that outstanding debt is in federally backed loans.

Advocates have pushed Congress and the Biden administration to unilaterally cancel all federally held debts, and progressive lawmakers are mounting a last-ditch attempt to halt loan repayments as the pandemic enters a third year.

“This is getting ridiculous,” said US Rep Alexandria Ocasio-Cortez, who is among members of Congress still paying off outstanding debts from college. Her loan balance is $17,000, she said. She did not go to graduate school because “getting another degree would drown me in debt I would never be able to surpass,” she said.

The congresswoman, 32, is the first in her family to graduate from college on her mother’s side.

“Growing up I was told since I was a child, ‘Your destiny is to go to college. That’s what’s gonna lift our family up and out. That is our future,’” she said.

Student debt has surged within the last decade as private university enrollment grew and federal and state governments made steep cuts to higher education funding against growing wealth inequality. Within the next four years, if unchecked, outstanding student debt is expected to hit $2 trillion. That doesn’t include money borrowed by students’ parents.

Over the last several decades, federal and state governments have stripped funding for higher education, while tuition costs have spiked, federal policy changes effectively eliminated limits on borrowing, and predatory lending schemes and sky-high interest rates have trapped a generation of borrowers into a lifetime of debt.

That compounded interest is a growing problem; with interest rates set at zero per cent during the current pause, borrowers have had temporary relief to begin paying off their principal balance. That is set to end next year.

In his remarks on Thursday night, US Rep Jamaal Bowman said student debt was a national crisis before the pandemic and “an even bigger one now”.

“For years, people have been doing all they can to make monthly payments, but can only afford to keep up with the interest that accrues,” said Rep Bowman, pointing to the thousands of Americans who have paid “hundreds of dollars every month for years without seeing the total amount they owed go down at all.”

Respondents said their student loan payments “will eat a large portion of their income and prevent them from affording other bills like rent, car loans and medicine,” according to the report. “These findings are doubly concerning within the context of the nation’s rising inflation and cost of living.”

The weight of all that debt can have severe long-term consequences among borrowers who default, from damaged credit to the risk of having their professional licenses or driver’s licenses suspended, depending on the state and type of loan involved.

“We are a country profiting off insurmountable and crushing student debt,” Rep Ocasio-Cortez said. “It is wrong. It is absolutely wrong.”

The pause on loan payments and interest has “given people the breathing room to do what they need to do,” she said.

“And so that we can stop writing these ridiculous articles that young people are killing diamond rings and they’re not buying houses and they’re killing this industry and that and not having children,” she said. “It’s because we’re being crushed by immoral debt. No person should have go into into debt, crushing debt, in order to get an education. … It’s wrong, it’s backwards, and it doesn’t help us as a country.”

The administration has canceled cancelled more than $9bn in student loan debt through targeted aid programmes for people defrauded by schools, or through the Total and Permanent Disability discharge programme, which grants relief to borrowers who are unable to work due to physical or psychological disabilities.

During his campaign, Mr Biden proposed a debt relief plan that would cancel up to $10,000 of undergraduate or graduate student loan debt for every year of national or community service, up to five years.

He also modelled a plan from Senator Bernie Sanders and US Rep Pramila Jayapal to cancel federal student loan debt for borrowers from public colleges and universities earning up to $125,000 per year, including students from private Historically Black Colleges and Universities, in an effort to close the racial wealth gap.

Those proposals were not included in his centerpiece domestic legislation packages.

The US Department of Education is mulling whether the president has authority to cancel student loan debt through executive action.

So why should the tax payers pay for bad financial decisions by people. It is very clear to the students and their parents what the payments will be. Even AOC realized that she could not afford to go on

WORK your way thru college, get a degree that actually qualifies you to EARN a decent salary, live WITHIN your means, and you won’t be “crushed” by student debt🤨

Florida Lieutenant Governor Jeanette Nuñez took aim at President Joe Biden on Sunday, claiming his 'disastrous' policies are driving Hispanic voters out of the Democratic Party. She made the comments in an interview with Fox & Friends, less than a year until the midterm elections that will decide who...
PRESIDENTIAL ELECTION・1 DAY AGO
San Diego Union-Tribune

The U.S. Senate's only Black Republican is putting forth what he characterizes as a positive response to partisan rhetoric on race that he's best-positioned to rebut
PRESIDENTIAL ELECTION・19 HOURS AGO
Newsweek

Scott made the comments Sunday night as Democrats continue their attempts to open debates on two voting rights acts.
PRESIDENTIAL ELECTION・14 HOURS AGO

Jason Furman also pushed back on Joe Manchin's case that Biden's big bill would worsen inflation, calling it "a bad reason" to oppose the measure.
BUSINESS・1 DAY AGO
The Guardian

Puzzle of Biden’s unpopularity has some pieces within his control and some not, experts say, as Covid casts a shadow over his first year in office
PRESIDENTIAL ELECTION・1 HOUR AGO
AFP

US President Joe Biden came in facing extraordinary challenges: a nation divided after the Donald Trump years, the Covid pandemic, and an economy in tumult. And he promised Americans a lot: to heal the country's democracy, defeat Covid, address deep-rooted racial and economic problems, and restore US standing around the world. How did he do?
PRESIDENTIAL ELECTION・6 HOURS AGO
The Independent

A new survey from Gallup shows that Americans’ party preferences swung 14 points toward the Republican Party as Democrats attempt to protect their majorities in the House and Senate in November. Gallup conducted telephone interviews with 12,416 Americans who were at least 18 years old and combined data from 13 separate polls between January and December of 2021. The margin of error is one percentage point. At the beginning of 2021, 49 per cent of Americans identified as Democrats or leaned that way compared with 40 per cent of Americans who identified as Republicans or leaned that way. But...
PRESIDENTIAL ELECTION・13 HOURS AGO

The MyPillow founder made the remarks at Trump's Arizona rally, where many speakers touted conspiracy theories about the 2020 election.
PRESIDENTIAL ELECTION・1 DAY AGO
The Independent

Supporters of former president Donald Trump allegedly received orders to march into the Michigan Capitol in Lansing from the Republican leader's campaign.A group of supporters "contemplated" working with a Republican lawmaker who had a Capitol office to get the 16 Trump electors inside the elector room where the official count was taking place, The Detroit News reported."...(W)e convened and organised in the state Capitol, in the city of Lansing, Michigan, and at 2.00 pm Eastern Standard Time on the 14th day of December 2020," said a false certificate signed and submitted to the National Archives.The supporters who signed the documents...
PRESIDENTIAL ELECTION・2 HOURS AGO
The Independent

It was a brutal week for the Democratic Party’s various factions as it became clear ahead of Martin Luther King Jr Day that the passage of voting rights legislation remains unlikely thanks to two Democratic senators, Joe Manchin and Kyrsten Sinema.As the president descended on Capitol Hill in an attempt to press the two on their resistance to alterations to the Senate’s filibuster rule, Ms Sinema took to the floor and delivered a speech outlining her continued refusal to make any changes to the rule even as unified Republican opposition means that passing legislation to combat gerrymandering and bills to...
CONGRESS & COURTS・11 HOURS AGO

ATLANTA (AP) — Americans must commit to the unfinished work of Martin Luther King Jr., delivering jobs and justice and protecting “the sacred right to vote, a right from which all other rights flow,” President Joe Biden said Monday. Martin Luther King Day is a moment when a mirror is held up to America, the […]
ATLANTA, LA・15 HOURS AGO
iPower 92.1/104.1 FM

Americans must commit to the unfinished work of Martin Luther King Jr., delivering jobs and justice and protecting "the sacred right to vote, a right from which all other rights flow,” President Joe Biden said Monday.
CONGRESS & COURTS・15 HOURS AGO
Newsweek

"If we do not protect the vote with everything that we've got, we will not have a country to protect going forward," the House majority whip said Sunday.
CONGRESS & COURTS・1 DAY AGO
KMIZ ABC 17 News

QUESTION OF THE DAY: Should Congress pass voting rights legislation?

President Joe Biden and other party leaders and activists have pushed hard for the legislation, including on Martin Luther King Jr. Day. The post QUESTION OF THE DAY: Should Congress pass voting rights legislation? appeared first on ABC17NEWS.
PRESIDENTIAL ELECTION・58 MINUTES AGO
Newsweek

Representative Adriano Espaillat said "much must be done to push these two senators to line up and be in lock-step with our leadership."
CONGRESS & COURTS・2 DAYS AGO
Newsweek