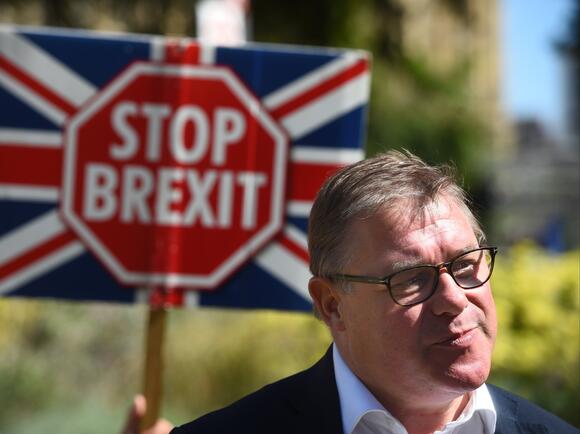 Conservative MP Mark Francois is to self-publish a memoir of his own role in the battle for Brexit – claiming he was turned down by book industry people who did not want the UK to quit the EU .

“I wrote it during lockdown and it’s basically about the battle for Brexit – the three-year battle in parliament and media to honour the result of the referendum,” Mr Francois told The Telegraph ’s Chopper’s Politics podcast.

Explaining that he approached a couple of dozen publishers with his book on the “inside story” of Brexit, the Tory MP said: “The problem was the orthodoxy within the publishing industry is very much Remain.”

Mr Francois added: “I got some nice compliments on the book and the writing, but it became fairly evident after a while that no publisher wanted to publish it.”

Asked if publishers were really Remain-biased or whether the idea was “in your head”, Mr Francois said: “There was definitely an element of that. I was getting it all second-hand through an agent to be fair, so I wasn’t getting it face to face.”

Mr Francois said he was advised to do his own thing by fellow Tory MP Nadine Dorries, recently appointed culture secretary. “She said, ‘Get it self-published, if the book’s worth publishing,’” he said.

Meanwhile, the backbench Tory MP said he would like the government to trigger Article 16 to suspend parts of the Northern Ireland protocol if the EU don’t concede to UK demands – saying “ideally” he would like to see the bold move before Christmas.

Mr Francois said: “[If] you keep threatening to do [trigger Article 16] and you don’t do it, then you look weak. If we’re going to do, it should be sometime in the next few weeks,” said the ERG chief.

On Friday Lord Frost said “significant” gaps still remain following his latest discussions with the EU Commission vice president Maros Sefcovic on the impasse over the protocol, with the two sides agreeing to “intensified” talks.

The Brexit minister confirmed the UK remained ready to trigger Article 16 – unilaterally suspending some of the arrangements already agreed with the EU – if a settlement cannot be found.

“I made clear that the UK still wanted to find a negotiated solution if that was possible,” he said. “Nevertheless the gap between our positions is still significant and progress on many issues has been quite limited.”

The UK is pressing for an easing of checks on goods moving from mainland Great Britain to Northern Ireland under the protocol, arguing they are damaging business and straining community relations.

Mr Sefcovic urged the UK to conclude a deal to allow medicines to flow easily from Britain to Northern Ireland as well as other issues concerning trade to the British province.

A review calling for the UK’s counterterror programme to focus more on Islamism rather than the far right and other threats could make “Britain less safe”, critics have said.William Shawcross, a former Charity Commission head with close ties to the government, said the Prevent programme should be “recalibrated” to reflect that “the most lethal threat in the last 20 years has come from Islamism”.But more suspected far-right extremists are currently referred to the intervention scheme than Islamists, and the number of incels has also been rising after the head of MI5 warned terrorism was “evolving” in the UK.“Prevent must return...
4 HOURS AGO
The Independent

The mystery of a missing mother-of-two who disappeared while walking her dog has captured the nation’s attention, with no hint of an answer in sight. Nicola Bulley vanished on a riverside path in Lancashire nearly two weeks ago, and now a man dubbed the ’Human Mole’ is hoping to help find out what happened. Forensics expert Peter Faulding joined the search for Ms Bulley this week, after raising concerns about the police theory she slipped and fell into the River Wyre. The founder and CEO of Specialist Group International has not been shy in his criticism, describing the probe...
10 HOURS AGO
Business Insider

U.S. Navy diving teams carried out the attack against the Nord Stream pipelines during a top secret mission overseen by President Joe Biden, a bombshell report claims.
FLORIDA STATE・7 HOURS AGO
The Independent

Russia has warned that the UK sending fighter jets to Ukraine would have military and political consequences for Europe and the rest of the world.Ukrainian president Volodymyr Zelensky made a surprise visit to Britain on Wednesday and urged MPs to by supply his air force with advanced jets.In a statement cited by Russian state news agencies, the Russian embassy in London said that if fighter jets were sent to Ukraine there would be “military and political consequences for the European continent and the entire world”.“Russia will find a way to respond to any unfriendly steps taken by the British...
2 HOURS AGO
The Independent

Prince Harry has called for more support for children across the UK in his first charity video since the release of his autobiography, Spare.Speaking on behalf of WellChild, a UK-based children’s charity of which the prince has been a patron since 2007, Harry called for help in easing the “tremendous pressure” families face to support their children.The Duke of Sussex asked people to consider nominating “someone you know” for a WellChild award, in an attempt to “grow the WellChild family”.“I look forward to meeting the award winners and spreading awareness about this incredible charity, he added.Click here to sign up for our newsletters. Read More 'Older woman' who took Prince Harry's virginity details 'passionate wham-bam' behind pubHarry and Meghan may attend King Charles' coronation for one personNew King Charles III stamp unveiled at London postal museum
12 HOURS AGO
The Independent

A former Irish premier has rejoined the political party he once led.Bertie Ahern led Fianna Fail from 1994, and served as Taoiseach from 1997.He led Ireland during the peace talks across the Irish border in Belfast, working with then-UK prime minister Tony Blair as the Belfast/Good Friday Agreement was signed in 1998.But Mr Ahern resigned from Fianna Fail in 2012 following a report from a tribunal.The Mahon Tribunal, which looked at allegations of planning corruption, did not find Mr Ahern to be corrupt but said he did not “truthfully account” for money he lodged to his bank account.Last September, the...
4 HOURS AGO
The Independent

“Nothing is off the table” when it comes to the question of providing fighter jets to Ukraine, the Prime Minister has said.Rishi Sunak, speaking during a joint press conference with Ukrainian President Volodymyr Zelensky, said sending warplanes was “part of the conversation” between the pair.His comment comes after Downing Street confirmed on Wednesday that the Prime Minister had asked Defence Secretary Ben Wallace to investigate what jets the UK could potentially give to Ukraine in its struggle against invading Russian forces.No 10, to mark Mr Zelensky’s surprise visit, announced in the morning that Britain would start training Ukrainian air force...
3 HOURS AGO
The Independent

The Government’s anti-terror Prevent programme needs “major reform” and must focus on security, “not political correctness”, the Home Secretary said.Suella Braverman told MPs the scheme – which aims to stop people turning to terrorism – needs to “better understand the threats we face and the ideology underpinning them”.Her comments came after a long-awaited report, published on Wednesday, made 34 recommendations for an overhaul of Prevent.Led by ex-Charity Commission chairman William Shawcross after being ordered by former home secretary Priti Patel in 2019, the assessment found Prevent was “out of kilter with the rest of the counter-terrorism system, and the UK...
5 HOURS AGO
The Independent

‘Strange’ Russian satellite blows up into cloud of debris – report

A division of the US space force has confirmed that a “strange” Russian satellite blew up last month, creating a cloud of debris that added to the junk already cluttering space.The 18th Space Defense Squadron tweeted on Tuesday that the Russian satellite Cosmos 2499 blew up on 4 January at an altitude of about 1170km, adding that the space force division is tracking 85 associated pieces of the debris.US satellite trackers had reportedly catalogued the Russian satellite as a piece of debris initially after it was launched in 2014 but later labelled it as the payload Cosmos 2499.Earlier news...
18 HOURS AGO
The Independent

Netflix steps up its effort to get paid for account sharing

Netflix has a plan to deal with rampant account sharing: a program that lets subscribers pay extra to share their account with people outside their household.The streaming giant introduced paid sharing in Canada, New Zealand, Portugal and Spain on Wednesday. It was previously rolled out in multiple markets in Latin America.While Netflix won’t say when paid sharing will come to other countries, some version of the plan is expected to be introduced in the U.S. in the next few weeks. Around one-third of Netflix's subscribers live in the U.S. and Canada.Netflix has more than 231 million paid subscribers in 190...
1 HOUR AGO
The Independent

NHS patients are being “hit hard” by industrial action, a health leader has said, as it emerged 137,000 appointments have been affected by strikes.The service has faced strikes by nurses, ambulance staff and physiotherapists over the past few days in an “incredibly disrupted week”, amid months of ongoing action.Data published by NHS England shows 137,081 appointments have been delayed due to industrial action in less than two months, with more than 49,000 postponed on Monday and Tuesday.Saffron Cordery, deputy chief executive of NHS Providers, said: “There are no winners in this situation: patients are being hit hard, trusts can’t deliver the...
2 HOURS AGO
The Independent

What fighter jets has Volodymyr Zelensky asked for and what might he get?

Addressing MPs in a packed Westminster Hall, Volodymyr Zelensky stressed that he was “thanking [us] in advance for powerful English planes”. He then presented speaker Sir Lindsay Hoyle with the helmet of a Ukrainian pilot inscribed: “We have freedom. Give us wings to protect it.”Hours earlier, Rishi Sunak had announced that Britain would offer training to Ukrainian pilots to fly modern warplanes: they are likely to undergo courses on RAF Hawks, Eurofighter Typhoons and F-35 Lightnings. There is already a plan in place to train Ukrainian helicopter pilots at the Shawbury base in Shropshire, as Air Marshal Sir Richard Knighton...
4 HOURS AGO
The Independent

Long-term exposure to tiny air pollution particles known as PM2.5 is linked with higher blood pressure in teenagers living in London – with stronger associations seen in girls, according to research.Scientists from Kings College London, who analysed data from more than 3,000 adolescents, also found that exposure to high levels of nitrogen dioxide (NO2) – a pollutant from diesel traffic in London – is associated with lower blood pressure in this group.The team said that based on its findings, published in the journal Plos One, more research is urgently needed to assess how air pollution may be affecting the cardiovascular...
5 HOURS AGO
The Independent

Jeremy Clarkson has admitted that major traffic caused by visitors to his shop at the Diddly Squat Farm prevented some people from getting to the local health centre for their Covid vaccinations.The controversial former Top Gear presenter discussed the issue in Amazon Prime’s Clarkson’s Farm, a series that follows his attempts to run the farm in the Cotswolds.In a preview of the first episode of the new series, seen by The Independent, Clarkson says the farm shop “turned out to be rather more popular than we’d expected”.Speaking over footage of large queues, a rammed car park and road traffic,...
2 DAYS AGO