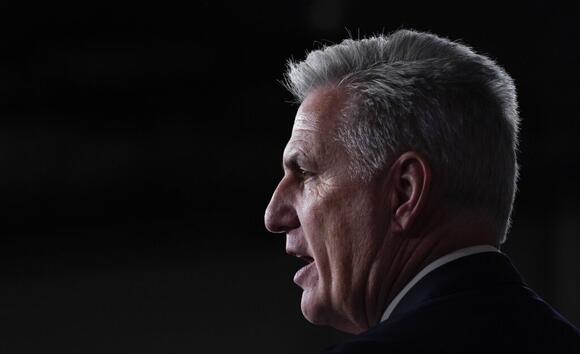 H ouse Minority Leader Kevin McCarthy said that controversies surrounding Republican Reps. Lauren Boebert of Colorado, Paul Gosar of Arizona, and Marjorie Taylor Greene of Georgia are distractions that will cause problems for Republicans as the party focuses on winning back the House in next year’s midterm elections.

“It's things we would not want to deal with,” McCarthy said at a press conference on Friday when asked if the three members are distractions for Republicans heading into 2022.

"It is things that the American people want to focus on, stopping inflation, gas prices, and others. And anything that deviates from that causes problems, yes,” McCarthy said.

Democrats have voted to strip both Greene and Gosar of their committee assignments; Greene for her past comments in support of conspiracy theories and incendiary social media posts, and Gosar for posting an anime video that depicted him fighting and killing Democratic New York Rep. Alexandria Ocasio-Cortez . Gosar was also censured by the House in November.

On Thursday, more than 40 members of the Congressional Progressive Caucus called on Boebert to also be stripped of her committee assignments over her comments about Democratic Minnesota Rep. Ilhan Omar, who is Muslim, which went viral last week.

While telling a story about being in a Capitol Hill elevator with Omar, Boebert called her a member of the “Jihad Squad” and recalled a Capitol Police officer running to stop the doors from closing on them. “Well, she doesn't have a backpack. We should be fine," the Colorado Republican said in an apparent reference to suicide bombings.

McCarthy declined to directly condemn Boebert, noting that she apologized publicly and talked on the phone to Omar (Boebert said that Omar hung up on her ).

“This party is for anyone and everyone who craves freedom and supports religious liberty,” McCarthy said.

McCarthy said that he talked to Democratic House Majority Leader Steny Hoyer about the two and suggested that the two of them be in the room when Boebert and Omar speak to each other.

“We should lower the temperature of this Congress. We should work together and talk to one of them. If disagreements and something goes astray, we apologize for it, exactly what Lauren Boebert did,” McCarthy said.

Greene took aim at South Carolina Rep. Nancy Mace after Mace criticized Boebert on CNN for “racist tropes and remarks that I find disgusting.” That prompted Greene to lash out on Twitter and start an hourslong back-and-forth between the two on social media and in media interviews.

Greene called Mace “trash,” not conservative, and falsely said the congresswoman favors abortion. Mace, a survivor of rape, opposes abortion but supports exceptions in cases of rape and incest. Mace used the emojis of a bat, a pile of feces, and a clown to describe Greene and called her a grifter who is unable to get anything done in Congress.

McCarthy denied that clashes in his conference, such as Mace and Greene’s public spat, would make it more difficult to govern if Republicans win the House majority in 2022.

“We’re going to be quite fine,” he said.

This is the same guy who said last week if he becomes the Senate Majority leader he would give them committee appointments. Talk about two faced. He only cares about votes.

Tomorrow he will want to award them a Congressional medal. You cannot trust him..immediately following the January 6th riot, he condemned it and said those responsible need to be held accountable. Then he changed his tune, well Trump changed it for him.

Yet McCarthy still does nothing to curb the fighting. If the democrats did the same thing, the retrumplicans would be outraged! Not only have all of them broken their oath to protect the Constitution from domestic terrorism, they have BECOME the domestic terrorists. They need to be voted out of office.

Republican Rep. Jim Banks advocated for Reps. Liz Cheney and Adam Kinzinger to be removed from the House Republican Conference for their participation in the select committee formed to investigate the Jan. 6 riot at the Capitol.
CONGRESS & COURTS・2 DAYS AGO
WashingtonExaminer

Majority Leader Chuck Schumer told lawmakers the Senate would forgo a planned recess and remain in session next week to debate and vote on two partisan election bills and a major rule change to modify the long-standing filibuster.
CONGRESS & COURTS・2 DAYS AGO
WashingtonExaminer

As Democrats in Washington turn their attention to election overhaul legislation, a top Republican contender for an open ruby-red Georgia House seat says that election issues are still a top concern for Republicans, too.
2 HOURS AGO
Newsweek

"I think anyone with common sense would be reluctant to go talk to this committee," the GOP congressman said.
CONGRESS & COURTS・20 HOURS AGO

If any further proof were needed that Donald Trump is the dominant force in his party, just look at the latest maneuver by Lindsey Graham. Graham, who said awful things about Trump when he ran against him but later became a golfing buddy and confidant, is a leading evangelist for a GOP led by the former president. Trump has declared rhetorical war on Mitch McConnell, calling him a "loser" and "old crow," among other epithets.
CONGRESS & COURTS・3 DAYS AGO
MSNBC

In theory, Republican Rep. John Katko has a compelling reason to run for re-election: The New York congressman is the ranking member on the Homeland Security Committee, and if the GOP takes back the House majority, he'd be in line to lead the influential panel. But in practice, there's a...
CONGRESS & COURTS・4 HOURS AGO
NBC News

The House committee investigating the Jan. 6 riot at the U.S. Capitol is blasting Republican attacks on the panel's legitimacy, contending in a court filing that the argument is "fatally flawed" and that it ignores precedent set by the Republicans themselves. The committee launched the counterattack — its first detailed...
CONGRESS & COURTS・3 DAYS AGO
coloradopolitics.com

The gloves came off quickly in the Republican primary for the Colorado congressional seat held by U.S. Rep. Lauren Boebert. Boebert's campaign announced on Thursday that it was launching a barrage of attack ads aimed at state Sen. Don Coram, the Montrose Republican who made it official last week that he's challenging the incumbent.
COLORADO STATE・2 DAYS AGO

WASHINGTON (AP) — Republican leader Kevin McCarthy’s refusal to provide information to a bipartisan House committee about his call with then-President Donald Trump during the Capitol riot is deepening a standoff between the committee and GOP lawmakers, forcing investigators to consider whether they could subpoena one of their own.
WASHINGTON, DC・4 DAYS AGO
MSNBC

The problem with Kevin McCarthy's response to Jan. 6 investigators

It was about a month ago when the House committee investigating the Jan. 6 attack requested information from Republican Rep. Scott Perry. Given the Pennsylvanian's anti-election work with the Trump White House, the appeal from the bipartisan panel was easily justifiable. Perry nevertheless said soon after that he would not cooperate with the investigation.
CONGRESS & COURTS・4 DAYS AGO
The Independent

The House select committee investigating the 6 January insurrection has asked House Republican Leader Kevin McCarthy to provide information about his conversations with former president Donald Trump during the worst attack on the Capitol since 1814.Select committee chairman Bennie Thompson made the request to Mr McCarthy on Wednesday in a letter asking the California Republican to voluntary provide information to the committee’s probe into “the facts, circumstances, and causes of the January 6th attack and issues relating thereto” and proposed that he meet with the committee on 3 or 4 February.“We write to request your voluntary cooperation with our investigation...
CONGRESS & COURTS・4 DAYS AGO
WLTX.com

WASHINGTON — The House panel investigating the U.S. Capitol insurrection requested an interview and records from House Minority Leader Kevin McCarthy on Wednesday, as it continues to seek first-hand details from members of Congress on former President Donald Trump’s actions on the day hundreds of his supporters brutally beat police, stormed the building and interrupted the certification of the 2020 election.
CONGRESS & COURTS・4 DAYS AGO

WASHINGTON (AP) — The House panel investigating the U.S. Capitol insurrection requested an interview and records from House Minority Leader Kevin McCarthy on Wednesday, as it continues to seek first-hand details from members of Congress on former President Donald Trump's actions on the day hundreds of his supporters brutally beat police, stormed the building and interrupted the certification of the 2020 election.
CONGRESS & COURTS・4 DAYS AGO
New York Post

House Minority Leader Kevin McCarthy (R-Calif.) confirmed Monday that he plans to remove three high-profile Democrats from their committee positions if Republicans take back the chamber this November and he wins the Speaker’s gavel the following January. In an interview with Breitbart, McCarthy vowed to kick Chairman Adam Schiff...
PRESIDENTIAL ELECTION・6 DAYS AGO
Business Insider

A former staffer for Rep. Kevin McCarthy said he's driven by the "most extreme wings" of the GOP. Former McCarthy aide Ryan O'Toole told CNN the congressman did not have a leadership strategy. O'Toole said McCarthy was instead motivated by what Reps. Marjorie Taylor Greene and Matt Gaetz want.
CONGRESS & COURTS・10 DAYS AGO

The Republican Party is a pro-infection party. From their support of lax Covid-19 safety measures to their tantrums over social media crackdowns on misinformation, Republicans have shown they believe the unfettered passage of dangerous material — be it viral content or a literal virus — is their right.
CONGRESS & COURTS・12 DAYS AGO
HuffingtonPost

House Republican Leader Kevin McCarthy on Monday slammed Twitter for trying to 'silence' diversity after the platform banned Rep. Marjorie Taylor Greene, Ga., for what it described as 'Covid misinformation.'. 'Diversity of opinion is the lifeblood of our democracy. And yet that fundamental American value is under assault by Big...
CONGRESS & COURTS・13 DAYS AGO
Newsweek

Representative John Katko, a New York Republican, announced on Friday that he would not seek another term this year.
POTUS・2 DAYS AGO