Normani on Becoming R&B’s Go-To Collaborator, and Why Her Album Will Be Worth the Wait 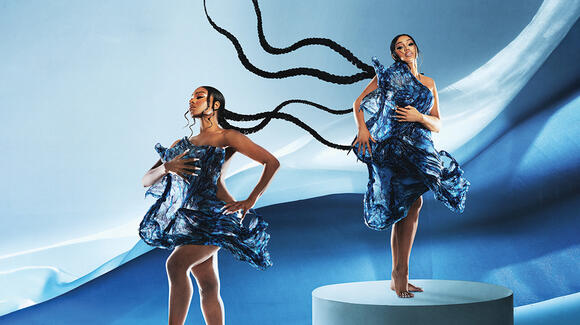 “In order for me to make sense of what I want to say to the world, it has to make sense to myself — it starts with me,” says 25-year-old Normani , whose collaborations with Cardi B , Khalid and Sam Smith have made her a household name through- out the pop and R&B worlds. She is speaking of her highly anticipated untitled debut solo album, one that for three straight years, her label, RCA, and fans, have awaited — not exactly patiently (there were Reddit forums dedicated to the subject “Why is Normani taking so long?”).

Back in 2019, the expectation was that new music would follow the release of “Motivation,” a bouncing powerhouse of a lead single that conjured the confident playfulness of early Janet Jackson, Beyoncé and Rihanna — artists who already counted themselves as Normani fans. The vocals were sultry; her choreography, pristine.

How do you drop something so promising, fans wondered, and then not deliver more?

“I needed time to go through my process,” says Normani with a tinge of vulnerability. “I needed to keep asking questions.” But if E.L. Doctorow once said that writing is like driving a car at night — “You can see only as far as your headlights” — Normani chose instead to road-trip down the path of self-discovery with company. She kept the passenger seat filled and enrolled in the school of creative collaboration.

With Khalid, there was the slow-burning ballad “Love Lies,” an experience she says epitomized “trusting the process” and letting go of her perfectionist impulses. A few months later, when Smith happened to be recording in a nearby studio, Normani carpe-diemed his invitation to hop on “Dancing With a Stranger,” which hit No. 1 on the Billboard Radio Songs chart. There have since been collaborations with Megan Thee Stallion (“Diamonds”) and a cameo in Megan and Cardi B’s video for “WAP.” All the while, behind-the-scenes collaborators, like hitmaker Starrah, encouraged Normani to start taking the reins on her own production. “I love working with women,” Normani says. “There’s so much we have to offer and nothing we can’t do.”

And yet she is someone who has had reason to not always trust her female peers or the process of working with others. The New Orleans and Houston-raised artist’s formative years coincided with her breakthrough as a member of Fifth Harmony, the “X Factor”-packaged girl group that launched her onto the charts and simultaneously into trauma. She was the group’s only Black member, and the only one whose vocals were once left off a track entirely. When fans believed she had slighted fellow 5H member Camila Cabello, they hurled vicious, racist death threats at her. The environment wasn’t supportive, and by the end of it all, she was shell-shocked.

The journey to uncovering her sound and message, and weaving those things into a record that is due at the top of 2022, has required the making of nearly three albums’ worth of music. If Normani’s latest single “Wild Side,” featuring Cardi B, is any indication, it’s emblematic of an artist who clearly knows where she’s going. Seductive and Aaliyah-esque, the song — which hit No. 3 on Billboard’s Mainstream R&B/Hip-Hop Airplay chart on Nov. 6 and has logged 100 million combined global streams to date — and its video are equal parts meticulous and expansive. They also capture the beauty in showing up for others. “There’s a lot of behind-the-scenes politics, and Cardi made it clear to everybody that she loved the record and believed in me wholeheartedly,” Normani explains. “The night before we released, I was obviously anxious, and Cardi just sat on the phone with me. She reminded me of who I am and told me that it was my time.”

Heidi Klum is making music. The multi-media superstar dropped a new single today, “Chai Tea With Heidi,” a dance track featuring Snoop Dogg. “Anyone who knows me, knows I love hip-hop,” Klum says. “Working with Snoop Dogg has always been a dream of mine.” The tune will serve as the theme song for Season 17 of the Klum-hosted “Germany’s Next Topmodel.” I caught up with Klum — who also serves as a judge on “America’s Got Talent” with Simon Cowell, Sofía Vergara and Howie Mandel — just after the new year. Hi, Heidi. How are you? I’m good. Happy New Year. Happy New Year to...
MUSIC・2 DAYS AGO
Variety

Adele has released a new music video for her song “Oh My God” off of her 2021 hit album “30.” The video premiered on Wednesday morning. Adele offered a teaser for the black-and-white, dance-heavy music video through Instagram on Tuesday afternoon. The new music video shows multiple Adele, accompanied by dancers and others, in a surreal barroom, singing and dancing and stunting around lots and lots of wooden chairs “Oh My God” marks Adele’s second official music video off of “30.” Her first, for the album’s lead single “Easy on Me,” debuted in October, a month ahead of the release of “30.” “Oh...
THEATER & DANCE・4 DAYS AGO
Variety

Ye, the artist formerly known as Kanye West, has dropped a new single, collaborating with rapper The Game. In the new track “Eazy,” Ye tackles his impending divorce with Kim Kardashian West and their shared custody of their four children. The rapper mentions comedian Pete Davidson, who is currently in a relationship with Kardashian. “God saved me from that crash, just so I could beat Pete Davidson’s ass,” Ye raps on the new single. Ye shared a teaser for “Eazy” on Instagram on Friday evening, posting a picture of a skinned monkey with the caption “MY LIFE WAS NEVER EAZY.” The Game and...
CELEBRITIES・1 DAY AGO
NME

The Weeknd Reveals Track List And Collaborations For New Album

Earlier this week, The Weeknd announced his next album and now, he’s revealed the track list in a video posted on social media on Wednesday (Jan 5). The clip opens with The Weeknd lying on the ground and there’s a mysterious woman wearing a red hood. Then there’s a quick look at an aged man, seeming to be himself. That image is also the album cover.
MUSIC・11 DAYS AGO
thatgrapejuice.net

Watch: Normani Sizzles With ‘Creep,’ ‘Waiting For Tonight,’ & More On ‘That’s My Jam’

It’s a new year and Normani is showing new sides to her artistry. For, the former Fifth Harmony member appeared on ‘That’s My Jam,’ where she teamed up with ‘Empire’ star Taraji P. Henson to sing a bevy of tunes. One such tune the...
MUSIC・5 DAYS AGO
Showbiz411

The Weeknd is starting off 2022 with a new album. Abel Tesfaye is dropping “Dawn FM” this Friday, his first new album since his mega hit “After Hours.” The new album has an eclectic group of guest stars including Quincy Jones, Jim Carrey, and Tyler the Creator.
MUSIC・13 DAYS AGO
Albia Newspapers

Jonas Blue was convinced to work with Why Don't We by the band's fans. The 'Don't Wake Me Up' hitmaker - who collaborated with the US boyband on the new track - has followed Ed Sheeran's example by working with the quintet, but it wasn't an instant "yes". He told...
MUSIC・5 DAYS AGO

The Weeknd Collaborator Jim Carrey Calls Singer’s ‘Dawn FM’ Album ‘Deep and Elegant’: ‘It Danced Me Around the Room’

Jim Carrey is a huge fan of The Weeknd‘s upcoming album, Dawn FM. Shortly after the R&B singer-songwriter officially announced the album’s title and release date on Monday (Jan. 3), the famed actor and comedian — who is listed as a collaborator in a cryptic video teaser for the project — praised the forthcoming release on social media.
CELEBRITIES・13 DAYS AGO
thatgrapejuice.net

Madonna was spotted hanging out with Kanye West this week. And while many assumed the link-up was a social engagement, a new report suggests the Queen of Pop is eyeing Ye’s services to helm her forthcoming album. Full story below…. Per The Sun, Madge is said to be angling...
MUSIC・10 HOURS AGO
HipHopWired

Give It To Me: 5 Reasons Timbaland Is The GOAT Producer

The conversation about who is the best to do it behind the boards is a debate to be had. But our money is on Timbaland as the greatest of all time producer; no cap. When the Hip-Hop community truly does the homework it should be no surprise why Timbo The King is just that—The King. […]
MUSIC・9 HOURS AGO

K. Michelle has one last R&B album for us, and from the sounds of things, she's going to make sure it hits hard. The 39-year-old recently told her Twitter followers that she's working on her last project – rumoured to be called I'm the Problem – from the often-emotional genre, also sharing that she'll be dropping a single in February.
MUSIC・5 DAYS AGO
Vibe

Picking up the baton from Destiny’s Child and Solange, it was announced on Friday (Jan. 14) that rising R&B phenom Joyce Wrice will sing the theme song for The Proud Family reboot, The Proud Family: Louder and Prouder.  Renowned composer, songwriter and producer Kurt Farquhar, who created the theme song for the original series returns and preserves the track’s catchy lyrics, melody, and nostalgia with this freshly reimagined version. “We wanted to make a person that grew up with it feel like that’s still their song, but at the same time, we wanted to feel like it’s been brought into a...
MUSIC・2 DAYS AGO
thebrag.com

R&B star Omarion has clearly had just about enough of being compared to the COVID variant Omicron. So much so, that he’s taken to social media to clear up the matter. Omarion spoke about the comparisons that have been drawn by fans and members of the public in a series of three TikTok videos which were posted on January 1st, 2022.
CELEBRITIES・13 DAYS AGO
RNB Cincy 100.3

DOE provides both a vocal and visual blessing with her latest single "When I Pray" for anyone that believes all things can be solved when you surrender them to God.
MUSIC・2 DAYS AGO
Variety

The pandemic may have completely up-ended the music industry’s traditional business model, but artists found all kinds of ways to make many millions of dollars in 2021 — and the big winners were nearly all white and male, according to a “10 Highest Paid Musicians” list published by Rolling Stone on Friday. The list, created by former Forbes correspondent Zack O’Malley Greenburg, not surprisingly features several artists who cashed in their song catalogs for nine-figure sums last year, with the big leader being Bruce Springsteen, who not only sold his publishing and recorded-music rights to Sony Music in December for a...
MUSIC・2 DAYS AGO
Billboard

Tones And I is getting ready for round two. The Australian singer and songwriter who had a monster hit with “Dance Monkey” is reportedly making progress on her sophomore LP. “I’ve already started this next album that’s coming out in August; it’s very different,” she told triple j,...
MUSIC・4 DAYS AGO
92.7 The Block

Presale for tickets to the event goes on sale tomorrow (Jan. 14) and best believe they're going to go like hotcakes, Omicron be damned!
CELEBRITIES・2 DAYS AGO
Rolling Stone

Avril Lavigne has announced the impending arrival of Love Sux, the singer’s seventh studio album. Ahead of the LP’s Feb. 25 release, Lavigne also shared the album’s second single “Love It When You Hate Me,” featuring a verse from Blackbear. The pop-punk track follows Love Sux’s introductory single “Bite Me.” Lavigne last released Head Above Water in 2019. Love Sux marks her first LP on Travis Barker’s DTA Records label, with the Blink-182 drummer serving as co-producer on both “Bite Me” and “Love It When You Hate Me.” Love Sux 🖤💀🧡 Feb 25thhttps://t.co/NGqsHnBB9b pic.twitter.com/ZpKtiuSSjA — Avril Lavigne (@AvrilLavigne) January 13, 2022 Lavigne previously said of...
MUSIC・2 DAYS AGO