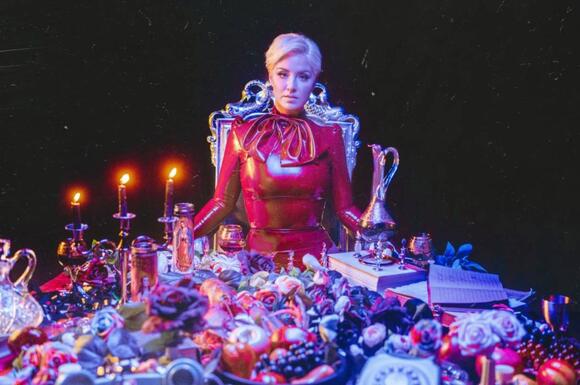 Maggie Rose regularly nods to her inspirations in her original recordings, bridging soul, rock, country, and funk alike on the 2021 album Have a Seat . Rose goes straight to one of the sources for a swirling, trippy cover of Rock Hall of Famer Carole King ’s “I Feel the Earth Move” that was released on Friday.

The track premiered earlier this week on SiriusXM’s Rock & Roll Hall of Fame station, for which Rose did a takeover to play music by some of her heroes.

In its original form, King’s is a soulful stomper that leads off the classic album Tapestry . In Rose’s reimagining, it’s ethereal folk-rock that travels into the psychedelic headspace of Tame Impala and even Mazzy Star. Rose delivers her lines in a steady, burnished croon — a bit country, a bit rock & roll — and adds her own inflections to the melody. The 5-minute version swells to a mass of echoing vocals and reverb to give it a darker tinge.

“We cut our version in the middle of February and didn’t shy away from the darkness we were all feeling, but that made the process cathartic,” Rose said in a release. “It is simply an amazing song that brought us all back together during an extraordinary time.”

Rose recorded Have a Seat at Fame Studios in Muscle Shoals, Alabama, with Alabama Shakes’ Ben Tanner serving as producer. She has live dates ahead through the end of the year, including a Dec. 9 show at the Knitting Factory in Brooklyn and a Dec. 19 stop at Brooklyn Bowl in Nashville.

UPDATE (1/24): On Monday, LiveNation announced When We Were Young Festival has added a third date, following its first two dates selling out. The third date takes place on Saturday, Oct. 29 and includes the same lineup, with the exception of Alex G replacing Wolf Alice and La Dispute will not be performing on Day Three. Tickets go on sale Monday, Jan. 31. *** UPDATE (1/21): On Friday, LiveNation announced that the When We Were Young Festival will now feature a second date with the exact same stacked lineup on Sunday, Oct. 23. Featuring multiple stages across festival grounds, earlier acts will perform 20-...
ENTERTAINMENT・2 DAYS AGO
Rolling Stone

Surviving Garfunkel: How Paul Simon Found His Voice and Made His First Solo Masterpiece

Happy 50th birthday to Paul Simon’s self-titled solo album — the funniest, nastiest, leanest, meanest, and possibly weirdest masterpiece of his great career. When the singer-songwriter dropped Paul Simon on Jan. 24, 1972, it was a shock to a pop audience that was expecting more sweetness in the Simon and Garfunkel mode. But this album was his big Garfunkel Purge, embracing his bitchy wit. It was considered a commercial flop, too eccentric for the millions who liked him better with Artie around. It usually gets overlooked in his story. But for some fans, including this one, it’s the best album...
MUSIC・2 DAYS AGO
Rolling Stone

For the first time in a decade, Daryl Hall is plotting a tour all on his own. The brief, eight-date trek will kick off on April 1 in support of his first solo career retrospective album BeforeAfter, set for release on the same day. Alongside special guest Todd Rundgren, Hall will make stops at New York’s Carnegie Hall, the MET Philadelphia, and Nashville’s Ryman Auditorium, in addition to shows in Georgia, Massachusetts, Illinois, Ohio, and Maryland. Tickets for the tour will be available starting Friday, Jan. 28 at 10 a.m. local time. Sales for Carnegie Hall will be delayed an hour...
MUSIC・2 DAYS AGO
iHeartRadio

This Is the Best Cover Song of All Time

A 24/7 Tempo analysis reveals that the best cover song of all time is "Unchained Melody" by the Righteous Brothers.
MUSIC・2 DAYS AGO
24/7 Wall St.

This Is the Biggest Comeback in Music History

A 24/7 Tempo analysis reveals that David Bowie had the biggest comeback in music history.
MUSIC・1 DAY AGO
Variety

‘Meet Me in the Bathroom’ Review: Time Capsule Doc Explores the Early Years of the Strokes, the Yeah Yeah Yeahs and LCD Soundsystem

There’s a montage early on in Dylan Southern and Will Lovelace’s documentary “Meet Me in the Bathroom” that is bound to give any geriatric millennial pause. The year is 1999. It’s New Year’s Eve in New York City. President Bill Clinton is speaking on television, full of optimism for the new century, while doomsday preppers stock up on ammo in anticipation of the Y2K bug plunging the world into a technological dark age. With the Twin Towers looming peacefully in the background and nary a cell phone in sight, five Manhattanites barely out of their teens are poised to emerge...
NEW YORK CITY, NY・2 DAYS AGO
metalinjection

Heart vocalist Ann Wilson performed her cover of "Rooster" by Alice In Chains at the Museum Of Pop Culture (MoPOP) Founders Award in December 2020. Wilson has now released a music video for the cover, which if anything is an excellent excuse to revisit this cover. Wilson's voice sounds incredible and leaves us all wanting even more!
MUSIC・8 DAYS AGO

The latest release from Third Man Records is Carole King – Home Again, recorded live on the Great Lawn of Central Park on May 26, 1973. This special concert was released in conjunction with Ode Records and Sony Music, and showcases songs from multiple albums including Tapestry and Fantasy.
MUSIC・13 DAYS AGO
Trentonian

Music would just not be the same without Carole King. One of the great American songwriters, King’s amazing life has been transformed into the award-winning Broadway show “Beautiful – The Carole King Musical.” Fans will be able to check it out at the Kimmel Cultural Campus Academy of Music Feb. 22-27.
PHILADELPHIA, PA・13 DAYS AGO
GMA

Thomas Rhett is looking back on the anniversary of one of his biggest hits, his 2015 single, "Die a Happy Man."
MUSIC・14 HOURS AGO
Rolling Stone

An outstanding lineup of First Nations talent are heading to Shepparton for a special concert on Saturday, February 26th, in an effort to raise awareness and support for the journey towards TREATY in Victoria. The Treaty Day Out has been organised by the First Peoples’ Assembly of Victoria to coincide...
MUSIC・6 DAYS AGO

Earl Sweatshirt brought his unique lyrical stylings to The Tonight Show Monday with a performance of his song, “2010.” The cerebral track, which finds the 27-year-old reflecting on the beginnings of his career, was the first single from Earl’s latest album, Sick!, which was released earlier this month. “Foot shook ground when I stepped on it/ I didn’t look back when I broke soil/ ‘Cause every time I did it would hurt more,” he raps. “We’re not going to escape certain laws of science, so your ascension has to be controlled,” Earl told Rolling Stone in December when asked about his rise to fame at age...
SCIENCE・2 DAYS AGO
Rolling Stone

FKA Twigs embraces a classic throwback aesthetic in the new music video for “Jealousy,” a track featuring Rema off her recent mixtape, Caprisongs.  The video, directed by Aidan Zamiri, has a late-Eighties/early-Nineties feel, jumping between sequences of FKA Twigs performing the song and dancing alongside a small troupe, and black-and-white footage of Rema delivering his verse solo. The choreography in the clip was handled by Twigs’ regular collaborator, Kash Powell.  “Jealousy” is the latest Caprisongs track FKA Twigs has released a music video for, following “Meta Angel” and “Tears in the Club,” her collaboration with the Weeknd. Caprisongs was released Jan. 14...
CELEBRITIES・13 HOURS AGO
Rolling Stone

RS Recommends: The Best Heated Gloves to Buy This Winter

Products featured are independently selected by our editorial team and we may earn a commission from purchases made from our links; the retailer may also receive certain auditable data for accounting purposes. Whether you’re shoveling the driveway or hitting the slopes, it’s hard to stay outdoors in the wintertime if...
SHOPPING・6 DAYS AGO

Kacey Musgraves Just Did the Most Kacey Thing Ever: Surprising a Philly Gay Bar With a Fleetwood Mac Cover

Kacey Musgraves got at least one enthusiastic “yas!” on Monday night when she surprised an intimate Philadelphia gay bar with a musical performance. Musgraves is set to play Philly’s Wells Fargo Center on Wednesday night. Standing in the corner of Tavern on Camac — Philly’s longest running gay bar, according to its Instagram —  and flanked by a grand piano, Musgraves makes her way through a verse and chorus of Fleetwood Mac’s “Dreams,” a 1977 single that returned to the charts in 2020 thanks to a viral skateboarding TikTok. Just out of frame, another singer chimes in with harmonies, and the...
CELEBRITIES・15 HOURS AGO
Spin

Melvins performed a cover of “Spoonman” during 2019’s “I Am The Highway” Chris Cornell tribute, and now fans will finally get to listen to the recorded version. The track, which features Soundgarden/Pearl Jam drummer Matt Cameron doing double duty with Melvins percussionist Dale Crover, appears on the band’s recently released Lord of the Flies EP. Today, they shared a video for the song, which you can watch below.
MUSIC・3 DAYS AGO
Rolling Stone

‘You Can Judge for Yourself’: Damon Albarn Addresses Taylor Swift Feud at LA Concert

Damon Albarn learned the hard way Monday that no one likes a mad woman when he claimed Taylor Swift “doesn’t write her own songs” — but that didn’t stop the Blur frontman from doubling down on his comments during a Los Angeles concert later that evening. According to Spin, Albarn referenced the day’s events before the finale of his performance at the Walt Disney Concert Hall and even took aim at Los Angeles Times music critic Mikael Wood, whose interview with Albarn contained the Swift quip. The British rocker claimed Wood “cast me into the social media abyss” and told fans “you can...
LOS ANGELES, CA・1 DAY AGO
Rolling Stone