Meet the ‘Spy Stone,’ a Russian robot disguised as a rock 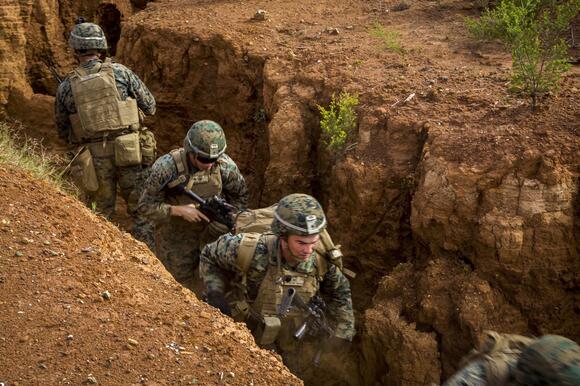 U.S. Marines and Sailors in a trench at Plum Barracks Training Area, New Caledonia, in 2017. One possible use for a gadget like Russia's "Spy Stone" is in trench or urban warfare. U.S. Marine Corps photo

Under lightly falling snow, a soldier sets a rock on the ground. A moment later the rock animates, extending first a periscope-like camera, and then lifting the whole of its rocky exterior to reveal a small set of tracks. With mobility now possible, the little robot wheels down the slight embankment of the sidewalk as though it’s a tank crashing over frozen hills. Once in place, the rock body lowers, leaving only the camera peeking out, observing the world around its concealed perch.

Dubbed the “Spy Stone,” this little robot is the creation of Russian Air Force cadets, over the course of three years at the Military Educational and Scientific Center at the Zhukovsky and Gagarin Air Force Academy. It looks, in many respects, like a conglomeration R2-D2 from Star Wars , a remote control toy tank, and a hide-a-key rock.

The robot is only a prototype, but it is one with potential real-world combat implications.

The Spy Stone can record up to 15 hours of video and audio, which it will process and transmit to human operators at a distance of up to 1.25 miles. To ensure that the stone is only recording video of interest, filming is activated by motion sensors, and the robot can go into a dormant sleep mode for close to 24 hours before recording.

“As the developers explained, one of the applications can be reconnaissance during a positional war or a ‘frozen’ military conflict,” says Samuel Bendett, an analyst at the Center for Naval Analysis and adjunct senior fellow at the Center for New American Security.

[Related: Inspired by a seed, this rotating drone will make your head spin ]

A short-range robot that looks like a rock is not useful in every situation, but it could find a niche in the static trenches of stalled front lines. Trenches and static front lines are most popularly associated with World War I, but the shelter and safety provided by digging temporary fortifications are a persistent feature of warfare. In Ukraine, where Russian-backed separatists have waged war against the national government since 2014, trenches are a durable feature.

It is into this kind of warfare that a Spy Stone might crawl to gain some little advantage.

If its treads can carry it down a trench or into a blast crater in no-man’s-land, the Spy Stone’s video could let a waiting unit of soldiers know when the coast is clear, or if an attack is coming, and could let soldiers advance on an unsuspecting foe. The small form and concealed shape of the gadget make it a far more subtle agent of espionage than a buzzing drone or an aircraft overhead.

“The “spy stone” can be useful as a passive data collector in an environment where it can readily blend in – like trench or urban warfare,” says Bendett. “The [Ministry of Defence] is now training for this kind of combat and is developing different types of robotic systems capable of functioning in an urban terrain. The downside is that it is potentially fragile and could be easily damaged, especially if it’s uncovered by the adversary (given how it does not have any defenses).”

While the Stone is just a prototype, it draws from existing experience with robots. The cadet’s advisor for the project was inspired by his experience with Russian forces in Syria.

[Related: The military wants their robots to be better listeners ]

It also fits into a trend of other small combat robots used for scouting purposes , like the hand-tossed Sphera robot .

“But there is potential utility for this passive collection technology, given how Russian forces tested another passive collection tech – the Sphera robot could just be thrown inside a building to get a quick situational awareness, so this ‘walking stone’ is in line with similar tech meant to give as much data about the battlefield to the Russian soldiers,” says Bendett.

Among the hurdles for the Spy Stone to overcome is its small track size. While tracks are better than tires over most of the terrain it is likely to encounter, even a modest rock could upend the Stone and put it on its back before it could get into position. The short range of the Stone’s communications, too, could present a hard limit, as it requires human operators to stay so close that they are within range of mortar fire.

If that can be overcome, and if Russia decides to further the advance of a trench-scouting robot beyond this prototype, then it could add both a scouting and a psychological advantage to battle. Trench warfare is mentally taxing to begin with. Adding in the possibility that soldiers defending trenches might start thinking every possible rock is a spy could only make that experience more disconcerting.

Watch it in action below:

we've had spy rocks since the Viet Nam war. It looked for the world like a clump of mud but was a listening device to place on the side of a trail to check for enemies traveling to and fro.

Cool rock, we have stuff you can't even imagine. Like the rest of our technology it's light-years ahead of Russia.

A Russian spy ship has been sailing around Hawaii for days

The U.S. military is keeping its eye on a Russian spy ship sailing near Hawaii for days. “U.S. Indo-Pacific Command is monitoring the Russian vessel operating in international waters in the vicinity of Hawaii,” INDOPACOM spokesman Maj. Rob Martins said in a statement provided to the Honolulu Star-Advertiser. “As part of our normal daily operations, we closely track all vessels in the Indo-Pacific area of operations through maritime patrol aircraft, surface ships and joint capabilities.”
HAWAII STATE・14 DAYS AGO
Business Insider

The US says it won't fight for Ukraine if Putin invades, but it could still get pulled into a conflict with Russia, experts warn

A former US ambassador to Ukraine said it would be "sensible" for Biden to send troops to Eastern Europe as a deterrent amid tensions with Russia.
MILITARY・22 HOURS AGO
Newsweek

Separatists in the Donbas region say Kyiv has built up military hardware as President Joe Biden seeks to present a united front against Russia.
POLITICS・1 DAY AGO
Newsweek

As tensions between the U.S. and Russia rise, the Norfolk-based USS Harry S. Truman carrier strike group has joined a NATO exercise in the eastern Mediterranean that began Monday. The exercise began as a Russian amphibious group approaches from the west, planning to join Russian Pacific warships for an exercise in the region. The NATO exercise, called Neptune Strike 2022, is the latest phase ...
MILITARY・2 DAYS AGO
Newsweek

"We will always respond to any deterioration of our security environment, including through strengthening our collective defence," the head of NATO said.
MILITARY・2 DAYS AGO
24/7 Wall St.

Wars in Which the Most Americans Died

America was born out of conflict, and much of the history of the United States has been punctuated by war. The United States has fought wars for independence, the preservation of its union, maritime trade rights, territorial expansion, and in opposition to tyranny, communism, and fascism. (These were the biggest battles of World War II.) […]
MILITARY・1 DAY AGO
Newsweek

It marked the largest convoy of aircraft China had sent towards the self-governing island this year.
AEROSPACE & DEFENSE・2 DAYS AGO
ABC11 Eyewitness News

The Defense Department placed 8,500 U.S.-based troops on heightened alert for deployment to Europe in response to the escalating crisis with Russia over Ukraine.
MILITARY・1 DAY AGO
WTKR News 3

The mysterious ailment got its name because symptoms were first reported by officials at the U.S. embassy in Cuba in 2016.
PUBLIC HEALTH・6 DAYS AGO
The Independent

The US Navy has begun “making arrangements” to recover the wreckage of an F-35C Lightning II jet fighter that slammed into an aircraft carrier during a failed landing, fell off the edge of the flight deck and plunged into the sea. The combat fighter crashed while trying to land on the USS Carl Vinson on Monday, leaving the $100m jet and its stealth technology up for grabs on the bottom of the ocean floor.A spokesman for the 7th Fleet, which is based in Japan, confirmed to The Independent that they had begun planning for the aircraft’s salvage from the...
MILITARY・20 HOURS AGO
The Independent

Seven military personnel were injured after a US warplane suffered a “landing mishap” on the deck of an aircraft carrier in the South China Sea, the US navy has said. The incident happened during routine flight operations while the F-35C warplane was trying to land on the deck of an American aircraft carrier USS Carl Vinson on Monday in the South China Sea. “The pilot safely ejected from the aircraft and was recovered via US military helicopter,” the navy said on Tuesday. “The pilot is in stable condition. There were seven total sailors injured.”Of the seven injured, three were evacuated...
MILITARY・1 DAY AGO
USA TODAY

After an invasion – or a 'minor incursion' – severe economic sanctions and a U.S. weapon-supplied resistance force await Russia in Ukraine.
MILITARY・22 HOURS AGO
Connecting Vets

As tensions heat up in Ukraine, NATO’s Neptune Strike reassigns the Carl Vinson carrier strike group and envisions security threats around the Black Sea.
MILITARY・1 DAY AGO
The Independent

Ireland raises concern about Russian naval exercises within its airspace

The Irish Government has expressed concern about planned Russian Navy military exercises 240km off Ireland’s south-west coast.The artillery drills at the start of February will take place in international waters, but within Irish controlled airspace and the country’s exclusive economic zone.All civilian aircraft will be routed away from the area during the exercises.In compliance with legal requirements, Russia has informed the aviation authorities of the planned activities in advance.The Irish Aviation Authority insisted there would be no impact to the safety of civil aircraft operations.Minister for State Patrick O’Donovan said Minister for Foreign Affairs Simon Coveney intended to raise the...
POLITICS・2 DAYS AGO
MilitaryTimes

Blinken to meet with senior Russian as Ukraine tensions soar

The US Navy is going to fish a wrecked F-35 out of the South China Sea. Here's how it's likely to get its stealth jet back.

The F-35 is the US military's most advanced stealth jet, and China could learn a lot about it if they were to get their hands on the wreckage.
MILITARY・24 MINUTES AGO
KDKA News Radio

The U.S. is currently monitoring Russia’s border presence with Ukraine. The Biden administration has provided millions of dollars in aid to Ukraine, and could possibly send thousands of troops to help.
MILITARY・2 DAYS AGO