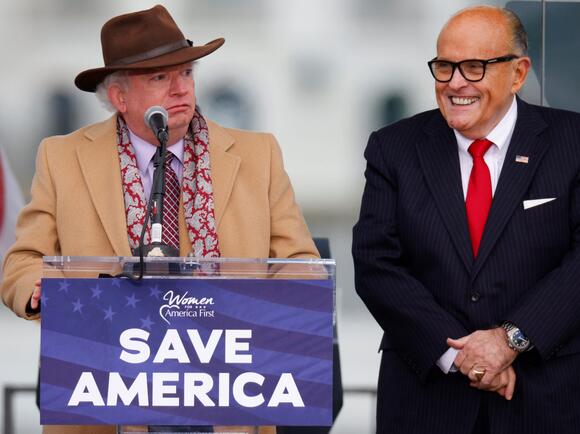 A lawyer and former Supreme Court clerk who advised former President Donald Trump will invoke his Fifth Amendment rights in response to a subpoena from the House select committee investigating the January 6 Capitol riot.

John Eastman's lawyer Charles Burnham sent a letter to committee's chair, Rep. Bennie Thompson, on Wednesday saying, "Dr. Eastman hereby asserts his Fifth Amendment right not to be a witness against himself in response to your subpoena."

"Members of this very Committee have openly spoken of making criminal referrals to the Department of Justice and described the Committee's work in terms of determining 'guilt or innocence,'" the letter said. "Dr. Eastman has a more than reasonable fear that any statements he makes pursuant to this subpoena will be used in an attempt to mount a criminal investigation against him."

Eastman is the second witness who has invoked or plans to invoke their Fifth Amendment rights in response to a committee subpoena. Earlier this week, a lawyer representing the former Justice Department official Jeffrey Clark informed the committee that his client would do the same. The panel said it expected Clark to come in on Saturday and formally assert his claim.

Eastman was a law professor at Chapman University and retired on January 13, a week after the deadly Capitol insurrection in which a mob of Trump supporters tried to stop Congress from certifying then-President-elect Joe Biden's victory.

Bob Woodward and Robert Costa say in their book "Peril" that Eastman sent Sen. Mike Lee of Utah a memo on January 2 falsely claiming that "7 states have transmitted dual slates of electors to the President of the Senate," who at the time was Vice President Mike Pence.

Beyond claiming with zero evidence that multiple states had sent "alternate" slates of electors to Congress, Eastman's memo went a step further and "turned the standard counting process on its head," the book adds.

In the memo, Eastman laid out six steps he said Pence could take to throw the election to Trump. One of them involved him unilaterally declaring that because of "ongoing disputes" in the seven states, "there are no electors that can be deemed validly appointed in those States."

Eastman's assertion caught the lawmaker by surprise, the book says: "Lee was shocked. ... The possibility of alternate or dueling slates would be national news. Yet there had been no such news."

The idea of "dueling electors" was previously an obscure one but gained steam in GOP circles in the run-up to January 6 as Trump advisors, pundits, and legal scholars speculated about sending an "alternate" slate of pro-Trump electors from battleground states to tilt the electoral-vote count in his favor.

Once the Electoral College has met, and each state has certified its election results, there's no constitutional provision for two slates of electors.

According to The New York Times, an alternate slate of electors has been sent to Congress only once since the Electoral Count Act of 1887 was signed into law: in 1960, when Hawaii's Republican governor sent a Republican slate of electors amid a dispute over the state's election results. But once the recount was finished and showed that the Democratic nominee John F. Kennedy had won the state's election, the governor sent a Democratic slate to Congress, which it accepted.

No such scenario existed after the 2020 election. Every US state had certified its election results, and the states to which Trump and his allies wanted to send "alternate" pro-Trump electors had certified their results for Biden.

While it is his right to plead the Fifth, it makes one wonder if he’s afraid of eventually being charged with sedition and/or conspiracy to overthrow the government? Most likely, being a lawyer, he probably knows that he would be found guilty of either charge or of other similar charges. The guy wanted to dance, now he doesn’t want to pay the fiddler.

Send them all to jail! What's wrong with patriotic Republicans that should be all over the place tying to send Dumped to jail, including his famiñy!!!!!

Wow he wasn't pleading the 5th when he was inciting the January 6th, 2021 insurrection, which by the way killed 4 rioters, injured Capitol Police, some of which died of injuries or suicide, plus injured over 140 police officers( so much for the G.O.P backing the blue), in addition to the deaths, and injuries, the Trumptards who terrorized the Capitol also vandalized and spread their fecal matter on the walls of our Capitol. He took the 5th, that is an admission of guilt. Not cool trying to steal 81,283,098 American Votes. Let's keep America Bidenful 🇺🇸!

The order paves the way for 700 documents related to the events of January 6 to be transferred to the committee.
CONGRESS & COURTS・1 DAY AGO
POLITICO

It carries big consequences for other challenges to the panel's work. Here's the latest: A federal judge rejected an effort by Donald Trump spokesperson Taylor Budowich to force the Jan. 6 select committee to return his financial records, which were subpoenaed from J.P. Morgan. The panel obtained the records last...
CONGRESS & COURTS・17 HOURS AGO
Newsweek

A $1.8T Build Back Better compromise Manchin offered the White House in December is off the table. "We'll just start with a clean sheet of paper."
PRESIDENTIAL ELECTION・15 HOURS AGO
mediaite.com

During a press on Wednesday afternoon, President Joe Biden expressed amazement at the hold Donald Trump still has over the Republican Party. Nancy Cordes of CBS noted that Senate Minority Leader Mitch McConnell said this year’s midterm elections will be a “report card” on Biden’s progress. She asked the president how he thinks that report card looks.
U.S. POLITICS・1 DAY AGO
Newsweek

Trump wouldn't commit to a 2024 run but seems to think Biden's presidency would help him in an election.
PRESIDENTIAL ELECTION・19 HOURS AGO
The Independent

A former Republican congressman has argued Florida governor Ron DeSantis would be far more “dangerous” as the standard-bearer of the Republican base.“Ron DeSantis is far more dangerous than Donald Trump,” former Florida representative David Jolly told MSNBC on Tuesday. “He’s more savvy. He’s more coy. And he doesn’t have the pitfalls that Donald Trump does.”The one-term congressman, formerly a Republican and now an independent, lashed out at the Florida governor, one of the most popular Republicans in the country, lambasting his handling of the Covid crisis, critical race theory, voting rights, and other matters in the state.“Florida’s not free...
PRESIDENTIAL ELECTION・1 DAY AGO

Rep. Lauren Boebert reportedly asked an Orthodox Jewish group if they were doing 'reconnaissance' at the Capitol

"I'm too short to see anyone's yarmulkes," said Boebert. Her office said that she was actually trying to make a joking reference to January 6.
CONGRESS & COURTS・14 HOURS AGO
Newsweek

In a blow to former President Donald Trump, the Supreme Court ruled that the House select committee investigating the riot could be handed his White House papers.
CONGRESS & COURTS・1 DAY AGO
Newsweek

71 Percent of U.S. Senators Out if Age Limits Imposed on Elected Officials

Fifty-eight percent of Americans surveyed in a new poll said that there should be a maximum age limit for elected officials.
CONGRESS & COURTS・13 HOURS AGO
CNBC

The Justice Department told a federal appeals court that four pages of Trump White House records will be given to the select House committee investigating the Jan. 6 Capitol riot. The DOJ says those documents are not covered by a temporary injunction barring release of many other Trump records. But...
POTUS・1 DAY AGO

Investigators want to know more about her intervention to try to convince former President Donald Trump to address the Capitol mob during the attack.
WASHINGTON, DC・12 HOURS AGO
TheAtlantaVoice

During the 2020 Democratic Presidential primary, then-candidate Joe Biden was made fun of by his chief opponent, Senator Bernie Sanders, for believing he could persuade the Republican Party to negotiate with him in order to advance his agenda. Wednesday night, the Republican Party, coupled with Democratic Senators Joe Manchin and Krysten Sinema, destroyed hopes of […] The post Democrats fail to change filibuster, Republicans block voting rights bill appeared first on The Atlanta Voice.
PRESIDENTIAL ELECTION・22 HOURS AGO
The Independent

The wife of one of the Supreme Court justices who could be charged with deciding whether the House January 6th select committee can view Trump administration White House records has signed on to an open letter calling for the committee’s two Republican members to be ousted from the House GOP conference. Virginia “Ginny” Thomas, a longtime conservative activist and the wife of Justice Clarence Thomas, was one of more than 60 signatories to the open letter, which was organised by the pro-Trump Conservative Action Project and asks House Minority Leader Kevin McCarthy to “act immediately to remove” Reps Liz...
CONGRESS & COURTS・2 DAYS AGO
Newsweek

"We need you guys to step up to the plate, Lindsey Graham, and tell us who you are," Bannon said while calling for the unmasking of five "traitor" GOP senators.
CONGRESS & COURTS・7 HOURS AGO

The most successful line of attack against a potential Trump 2024 candidacy will likely come from the populist right.
FLORIDA STATE・17 HOURS AGO
Deadline

Robert Costa, who has been national political reporter at The Washington Post and was host of PBS’s Washington Week, is joining CBS News as chief election and campaign correspondent. Costa will join the CBS News Washington bureau on Feb. 13, and will report for broadcast, streaming and digital platforms. The announcement is a significant hire for CBS News, as Costa is among the most prominent political journalists. Costa and Bob Woodward co-authored Peril, about the final year of Donald Trump’s presidency and the early tenure of Joe Biden. Costa has been a national political reporter at the Post since January, 2014. Although...
PRESIDENTIAL ELECTION・20 HOURS AGO
Business Insider

An ex-campaign staffer claimed Giuliani, others oversaw the plot, saying, "the campaign was throwing enough shit at the wall to see what would stick."
PRESIDENTIAL ELECTION・8 HOURS AGO
Business Insider

The legislation would have reshaped the election landscape in the United States by expanding voting access and re-fortifying the Voting Rights Act.
PRESIDENTIAL ELECTION・18 HOURS AGO