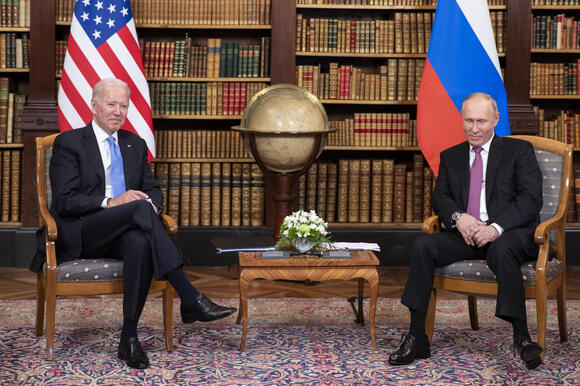 In an Associated Press report, Putin's foreign affairs adviser Yuri Ushakov said the two governments will announce the date the call will take place once they have ironed out all the details.

Russia has expressed concern over Ukraine's push to join NATO, while the West has shown concern over Russia's increased buildup of troops near Ukraine. Russia warned that any presence of NATO troops on Ukrainian soil would cross a "red line."

Ushakov said during the call, Putin will demand the creation of a legally binding document that would "exclude any further NATO's expansion eastward and the deployment of weapons systems that would threaten us on the territories of neighboring countries, including Ukraine."

Ushakov also cited an early 1990s verbal agreement from Western leaders that NATO would not expand eastward—which did not happen as other former-Soviet countries joined the alliance—as another reason not to let Ukraine join.

Thursday, at a summit in Stockholm, Russian Minister of Foreign Affairs Sergey Lavrov warned U.S. Secretary of State Anthony Blinken denying Russia a say in the expansion was "playing with fire."

For more reporting from the Associated Press, see below:

Tensions between Russia and the West have escalated in recent weeks, with Ukraine, the U.S. and other Western allies increasingly concerned that a Russian troop buildup near the Ukrainian border could signal Moscow's intention to invade. The U.S. has threatened the Kremlin with the toughest sanctions yet if it launches an attack.

Ukrainian Defense Minister Oleksii Reznikov told lawmakers Friday that the number of Russian troops near Ukraine and in Russian-annexed Crimea is estimated at 94,300, warning that a "large-scale escalation" is possible in January.

Russia and Ukraine have remained locked in a tense tug-of-war after Russia annexed Ukraine's Crimean Peninsula in 2014 and threw its weight behind a separatist insurgency in Ukraine's eastern industrial heartland, known as the Donbas. More than 14,000 people have died in the fighting.

Ukraine's defense minister warned Friday that an escalation "is a probable scenario, but not certain, and our task is to avert it."

"Our intelligence service analyzes all scenarios, including the worst ones," Reznikov said. "The most probable time when [Russia] will be ready for the escalation is end of January."

Konstantin Kosachev, a deputy speaker of the upper house of parliament, reaffirmed Moscow's denial that it was pondering an attack.

"We don't have any plans to attack Ukraine. We don't have any heightened military activity near Ukraine's borders. There is no preparation underway for an offensive," Kosachev told Russia's state TV channel Russia-24.

The Kremlin has voiced concern that Ukraine may use force to reclaim control of the rebel east. And adding to the tensions, the head of a Russian-backed, self-proclaimed separatist republic in eastern Ukraine said Thursday that he could turn to Moscow for military assistance if the region faced a Ukrainian attack.

Reznikov said Ukraine wouldn't do anything to provoke Russia but is prepared to respond in case of an attack. "Ukraine is most interested in political and diplomatic resolution," the defense minister said.

Biden will fold and give Putin whatever he asks for. He is weak and has no spine. A while ago Biden said he was sending two destoyers to the Black Sea. Putin said dont send them and Biden turned them around. Biden has backed down fron everyone he has faced since he became president.

Fewer Than 1 in 6 Americans Want U.S. Soldiers in Any Ukraine-Russia War: Poll

More Republicans than Democrats believe boots on the ground should be deployed in the event of an invasion.
MILITARY・1 DAY AGO
Business Insider

White House press secretary Jen Psaki was confronted Friday over President Biden's dismissal of a question about the Russia-Ukraine conflict as "stupid," saying he did in fact not dismiss the idea of "proactive deterrence." Biden was caught on a hot mic muttering "what a stupid question" after Fox News correspondent...
PRESIDENTIAL ELECTION・1 DAY AGO

Russia Announces Deployment of Over 140 Warships, Some to Black Sea, After Biden Warning

The Russian Defense Ministry said the Russian Navy will have a series of exercises in all zones of responsibility from January to February, according to TASS.
MILITARY・2 DAYS AGO
Newsweek

Japan Steps Up on China, Russia and 'Strategic Issues' Amid Defense Review in Biden Call

"The interesting thing is that the wide variety of issues actually is closely intertwined," a Japanese official said after a meeting between Biden and Kishida.
FOREIGN POLICY・1 DAY AGO
Newsweek

Defense minister Christine Lambrecht said weapons deliveries "would not be helpful."
POLITICS・20 HOURS AGO
The Independent

Tensions continue to mount along Russia’s border with Ukraine, where Moscow has been amassing a military presence for several weeks now, estimated to amount to around 106,000 soldiers.Russian president Vladimir Putin has denied he has any intention of invading the neighbouring state but has presented the West with a series of demands, including an end to the eastern expansion of Nato membership to ex-Soviet states and the curtailment of US and Nato military activity on Russia’s doorstep.President Putin has meanwhile been warned off even thinking about crossing the border into Ukraine by his US counterpart Joe Biden.“I’ve been absolutely...
POLITICS・1 DAY AGO

Michael McCaul Predicts Taiwan Invasion After Olympics, Ukraine One 'in the Next Month'

The ranking Republican on the House Foreign Affairs Committee said China and Russia will each launch invasions in the near future.
SPORTS・1 DAY AGO
Newsweek

Russia Teams Up With China and Iran Before Ukraine Crisis Meeting With U.S.

The drills in the Indian Ocean with China and Iran started on Friday, Iranian media outlets have reported.
MILITARY・2 DAYS AGO
Fox News

A former member of the Obama administration pushed back after President Biden brushed aside a question from a Fox News reporter about allowing Russian President Vladimir Putin to make the first move in Ukraine and called it "stupid." "It isn't a stupid question," former Obama Director of Global Engagement Brett...
PRESIDENTIAL ELECTION・2 DAYS AGO
The Conversation U.S.

Ukraine got a signed commitment in 1994 to ensure its security – but can the US and allies stop Putin's aggression now?

Russia’s illegal annexation of Ukraine’s Crimean Peninsula in 2014 was the first change of internationally recognized borders in Europe through military force since World War II. Russia proceeded to instigate and fuel a war in eastern Ukraine that has claimed some 14,000 lives so far. Last year, Russia began massing a force of more than 100,000 troops along Ukraine’s eastern and northern border and in the occupied Crimea, and taking other provocative actions. U.S. President Joe Biden said on Jan. 19, 2022, about Putin: “Do I think he’ll test the West, test the United States and NATO, as significantly as he...
POLITICS・1 DAY AGO

"If you want to stop somebody, you are not going to just be talking about sanctions," Trump told Sean Hannity on Thursday.
PRESIDENTIAL ELECTION・2 DAYS AGO
Fox News

Senate Judiciary Committee member Lindsey Graham, R-S.C., told Fox News that earlier Friday he met with former President Donald Trump and that the two had a frank discussion about the state of the country. Graham told "Hannity" that both agreed President Biden has been a disaster as commander-in-chief, and that...
POTUS・1 DAY AGO
The Independent

The head of the German navy has resigned after coming under fire for comments he made over Ukraine and Russia.Vice Admiral Kay-Achim Schoenbach said Ukraine would not regain the Crimean Peninsula, which Russia annexed in 2014.Speaking at an event in India on Friday, he also said it was important to have Russia on the same side against China, and suggested Russian president Vladimir Putin deserved “respect”.His comments, captured on video, caused anger in Ukraine, which summoned the German ambassador to complain. They also sparked consternation and a swift rebuke back in Berlin.By late Saturday, Mr Schoenbach had asked for...
MILITARY・3 HOURS AGO
The Independent

Why would Russia invade Ukraine?

With 100,000 Russian troops stationed near the Ukrainian border, fears are growing that president Vladimir Putin will decide to invade. The threat comes eight years after Russia annexed Crimea and sparked fighting in the Donbass region of eastern Ukraine, where a low-level conflict, which has killed more than 14,000 people, is still rumbling on between Kyiv and separatists. Although the West hopes to alleviate tensions and the risk of war in the region, talks between the Kremlin and Nato have made no ground. And so, as things stand, it is far from clear what will happen next.Antony Blinken, the...
POLITICS・2 DAYS AGO
Newsweek

Secretary Blinken met with his Russian counterpart in Geneva Friday to discuss the situation in Ukraine. The live updates for this blog have ended.
FOREIGN POLICY・1 DAY AGO
Newsweek

Putin Knows America, Divided at Home, Distracted by China, Is Toothless in Europe

"Russia believes that weakness narrative, and not just about Biden, not even primarily about Biden, about the West, about the United States and Europe," Jeremy Shapiro of the European Council on Foreign Relations told Newsweek.
POLITICS・2 DAYS AGO
The Independent

The US Embassy in Kyiv has requested that the State Department authorise the departure of all nonessential personnel and their families, reports say.Citing multiple sources familiar with the matter, CNN says that the departures could start soon, with an announcement coming in just days. Bloomberg published a similar report.A State Department spokesperson told CNN that there is “nothing to announce at this time,” adding that rigorous contingency planning is conducted as always in the event the security situation deteriorates.A source close to the Ukrainian government says that Kyiv has been informed and that evacuations of diplomatic families could begin...
FOREIGN POLICY・19 HOURS AGO
Newsweek