Android 12: If your phone shows a camera or microphone icon someone may be spying on you 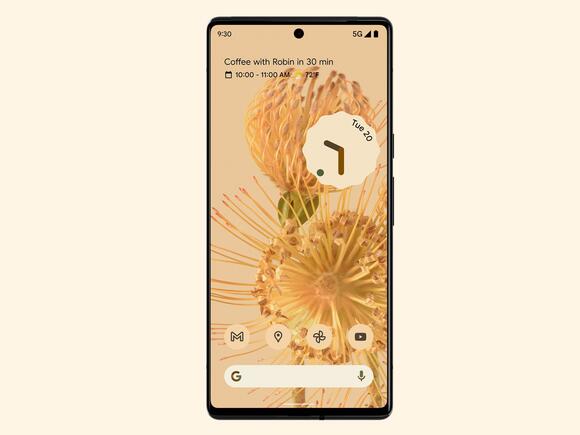 Google ’s latest operating system, Android 12, has a key feature to make sure that malicious individuals are not accessing user’s camera and microphone.

The whole OS update has a whole host of privacy tools such as a locked folder in Google Photos, a quick delete feature to clear Google Chrome browsing histories, and a ‘privacy dashboard’.

One of the new additions is an indicator at the top of the phone, in the top right corner of the screen, that brings up a camera or microphone icon if an app has asked to access that hardware.

This update means that hackers or hazardous apps would no longer be able to silently access such personal data – something that users have been worried about in the past.

In July 2020, an Instagram bug activated the ‘camera on’ notification on iPhones when users were not taking photos as well as when they were , leading people to think the app was spying on them.

As well as the icon, Android 12 now tracks when and which apps have accessed sensitive information. This includes the camera and the microphone, but also location, calendar, call logs, contacts, files, and more.

Users can find this in the privacy dashboard in the Settings app, which shows a list, and a pie chart of which piece of personal hardware or software is asked for the most. 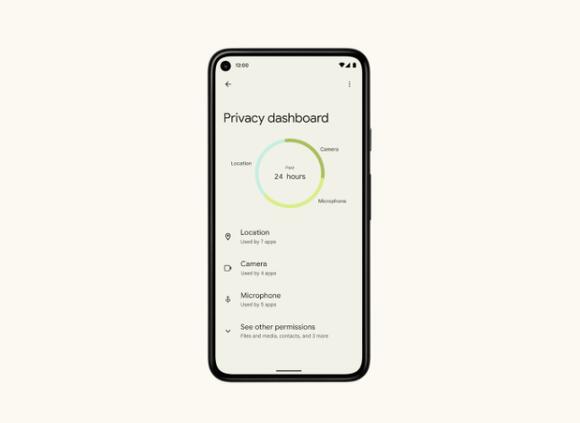 There are also dedicated buttons in the quick settings bar – found by pulling down from the top of the phone – that can completely turn off the microphone and camera for the whole phone.

When opening an app that does require those permissions, when making a call or using the native camera app, Android will notify the user that the restriction is place with a button to undo it.

You have a cell phone, computer, ipad, store cards, credit cards , go on any media sites, guess what all privacy is gone. Get over it. That horse bolted with technology, we are all part of a global world like it or not.

This is actually a feature they copied from the Apple iPhone. I noticed the orange dot on the my screen and after a short Google search I discovered that it was means that the app you are currently running may have access to your camera and/or microphone. I was like, hell that makes sense because of was on a phone call when I noticed the icon.

bottom line there's no such thing as privacy anymore the government/ tech company has made sure of that.......

This 4K Smart TV Was Already Affordable, and Now It’s 40% Off for a Limited Time

Football season is nearing an end, and you’ll want to make the right impression when you have visitors over for the big game. What’s the best way you can do that? It has to be none other than watching it on a big screen. Before you send out those invites to friends and neighbors, you’ll want to check out the deal going on right now on the Hisense 65-Inch Class H8 Quantum Series Android 4K smart TV. It’s discounted by 40% for a limited time. (If your budget is limited to $500, the 55-inch model is 38% off, which brings...
ELECTRONICS・2 DAYS AGO
makeuseof.com

The 5 Best Firewall Apps to Secure Your Android Phone

Though Android is generally a secure operating system thanks to the walled garden of the Play Store, you may come across a malicious website while browsing the internet or installing a modded version of an app. Such malicious websites put your personal information and data at risk, making you an...
CELL PHONES・5 DAYS AGO
Android Headlines

How To Stop Location Tracking From Your Android Phone Or Tablet

Location data tracking is prevalent in the tech world to ubiquity, so learning how to control that — in case you need or prefer to — on an Android phone or tablet is important. Now, the reasons that you might want to stop Google from tracking your location...
CELL PHONES・8 DAYS AGO

8 tips to speed up your Android phone

Your Android phone will never perform how it did on the first day you unboxed it. You will install apps, games, and store plenty of junk files that negatively impact its performance. Thankfully, you can follow a few tips to speed up your Android device. While these methods won't exactly make it as fast as one of the latest Android phones, they will bring about a considerable improvement in system performance and smoothness and make it perform as the day you first got it.
CELL PHONES・9 DAYS AGO
BGR.com

Google Pixel 7 news and rumors: What Google’s next big phone could bring

Don't Miss: Thursday’s deals: KN95 masks, $15 Sonicare toothbrush, major Anker sale, more The Google Pixel 6 represented a shift in direction for Google. The phone is the first to offer a Google-designed chip, in the new Tensor chip, plus it offers some incredible camera features, and more. But while Google has been building phones for a long time, the Pixel 6 is still a first-gen product in Google’s big new smartphone push. The Pixel 7, on the other hand, could be a truly amazing phone. The Pixel 6 is still a relatively new phone, and as such, it will probably be...
CELL PHONES・1 DAY AGO
Digital Camera World

Anamorphic lenses are popular among filmmakers not just because they can squash an ultra wide image into a regular sensor, but because they give images a particular ‘look’, including elongated flare effects – and that’s what this new CineFlare Streak filter replicates. This anamorphic effect comes...
ELECTRONICS・14 DAYS AGO
ANDROID COMMUNITY.COM

If you need a dongle to wirelessly connect your smartphone to your car’s infotainment system, the Motorola MA1 has been recently announced. It is a plug-and-play adapter that will integrate your Android phone to Android Auto without needing a USB adapter. So while driving, all you have to do is say “Hey Google” so you can concentrate on the road and let your digital assistant do all the work. While the company is owned by Lenovo, the device is part of the Motorola Sound brand which includes earbuds, headphones, headbands, and wireless speakers.
CELL PHONES・14 DAYS AGO

Have you been rocking Android 12 or are you still waiting for the update?. Google’s Android 12 update has been available to smartphone makers since October 2021, which means companies have had roughly four months to bring the update to their phones. The real proof is in the manufacturers’...
CELL PHONES・13 DAYS AGO
CNET

Best Android phones you can buy in 2022

Android phones come in all shapes, sizes and prices, with a dizzying array of options from a vast choice of manufacturers. And new models seem to arrive every other week, with big names like Samsung, Google, OnePlus and others packing their phones with the latest, greatest bits of mobile technology. Features like fast 5G connectivity, vivid Super AMOLED displays and 120Hz refresh rate screens are now commonplace, and those with deeper pockets can access futuristic, cutting-edge tech like foldable displays.
CELL PHONES・13 DAYS AGO
ZDNet

NoReboot attack fakes iOS phone shutdown to spy on you

A new technique that fakes iPhone shutdowns to perform surveillance has been published by researchers. Dubbed "NoReboot," ZecOps' proof-of-concept (PoC) attack is described as a persistence method that can circumvent the normal practice of restarting a device to clear malicious activity from memory. Making its debut with an analysis and...
CELL PHONES・13 DAYS AGO
Digital Photography Review

Typically, when an iOS device becomes infected with malware, removing it is as straightforward as restarting the device. However, security researchers from ZecOps have devised a way to make it appear that your iPhone has been shut down and rebooted, leaving the door open for hackers to continue to infiltrate your device and even spy on you via your phone's camera and mic. The phone can also maintain a live network connection in this state, leaving your phone able to transmit data to nefarious actors.
CELL PHONES・7 DAYS AGO
Phandroid

How to scan documents with your Android phone

Back in the day, scanners were pretty popular because they allowed users to take physical copies of things, like photographs or documents, and digitize them. These days, with photos and documents being largely digital, scanning documents has become less of a necessity than it did back then. This doesn’t mean...
CELL PHONES・9 DAYS AGO
Phandroid

How to stream games to Twitch from your Android phone

Streaming seems to be gaining a lot of popularity these days and it’s not hard to see why. After all, if you’re going to play games already, why not let people watch you and if you’re entertaining enough, make some money at the same time. There have...
VIDEO GAMES・10 DAYS AGO
houstonianonline.com

Is your phone getting an Android update? Check out the overview – week 1

One of the regular sections of Android Planet It is an overview of the weekly update. In each round you will find a clear list of smartphones and tablets that have received an Android update or security patch. Of course you’ll also find this overview every week in 2022 on our website.
CELL PHONES・12 DAYS AGO
Phone Arena

A new update may soon bring new features to the At a Glance widget on Pixel phones running Android 12. As first reported by Android Police, a new beta version of the Google app adds new features like doorbell camera preview and a reminder if your flashlight is on. The update also adds a safety check alert for a started countdown from the Personal Safety app and displayable information about the connected devices.
CELL PHONES・9 DAYS AGO
xda-developers

Android 13 may let you switch user profiles from the keyguard

Although it has just been a few months since Google first rolled out Android 12 to its Pixel lineup, we’ve already learned quite a bit about the next major Android OS upgrade — Android 13. We know that Google is internally referring to Android 13 with the dessert-themed codename “Tiramisu,” and we’ve seen some evidence to suggest that it may let secondary profiles make payments via NFC, bring native support for another private DNS standard and that it may bring full support for Bluetooth LE Audio.
NFL・9 DAYS AGO
PCWorld

Microsoft Defender could protect your Android phone and Mac, too

Are you a longtime BGR Deals reader? If so, then you definitely know that we’ve been digging up some seriously awesome gadgets and gizmos on TikTok lately. TikTok is good for more than just watching what all your friends and your favorite creators are up to. It’s also home to so many great Amazon finds, like the best alarm clock of 2022. And our readers have been loving them just as much as we have. Examples of recent finds include the incredible $24 Amazon find that can fix practically anything, and the classy $21 rainfall showerhead that turns any bathroom in...
BEHIND VIRAL VIDEOS・2 DAYS AGO