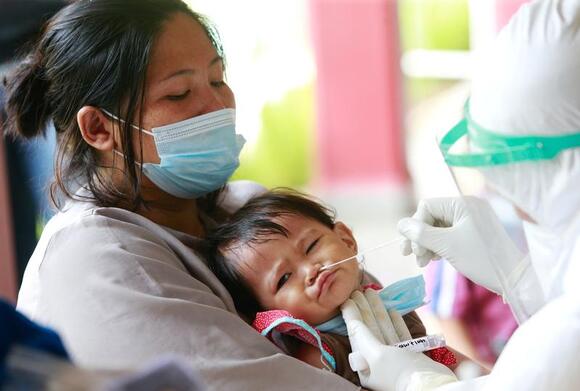 (Reuters) - The following is a summary of some recent studies on COVID-19. They include research that warrants further study to corroborate the findings and that has yet to be certified by peer review.

Non-severe COVID-19 during pregnancy has no visible effect on the baby's brain, according to a small study presented on Tuesday at the annual meeting of the Radiological Society of North America here.

Researchers led by Dr. Sophia Stoecklein of Ludwig Maximilian University in Munich used fetal MRI to study 33 pregnant women with mild or moderate COVID-19. The MRI scans showed “normal age-appropriate brain development” in all cases, Stoecklein said in a statement. “There were no findings indicative of infection of the fetal brain.”

On average, the women were about 28 weeks into their pregnancies, with symptoms having started at just over 18 weeks into the pregnancy - most often, a reduced sense of smell and taste, dry cough, fever and shortness of breath.

Only mothers who did not require hospital admission were included in the study. “Since the impact of severe infection on brain development in the fetus has not been conclusively determined, active protection against SARS-CoV-2 infection during pregnancy remains important,” Stoecklein said.

Although people with cancer generally do not have the typical strong immune response to COVID-19 vaccines, they still benefit from the shots, according to new data.

Researchers in the U.S. Veterans Affairs healthcare system compared 29,152 vaccinated patients with cancer to the same number of similar patients who were unvaccinated. Immunization with both doses of an mRNA vaccine from Moderna or Pfizer/BioNTech was associated with lower infection rates, especially in patients who were not currently receiving systemic therapy and in those receiving hormonal drugs such as AstraZeneca's Faslodex (fulvestrant) or Johnson & Johnson's Erleada (apalutamide), the researchers reported on Thursday in JAMA Oncology here.

Starting 14 days after the second dose, the efficacy of the vaccines was 58% overall, 76% in patients receiving hormone therapy, and 85% in those who had not received systemic therapy - including chemotherapy and immunotherapy drugs - for at least 6 months. While there were few COVID-19 deaths overall, the number was lower in the vaccinated group. “Our study is the first... to demonstrate vaccine effectiveness against SARS-CoV-2 infection in patients with cancer,” researchers said.

The intravenous antibody cocktail sold by Regeneron Pharmaceuticals Inc (casirivimab/imdevimab) might work just as well if administered by injection under the skin, a new study suggests.

Doctors at the University of Pittsburgh, faced with a surge in patients and healthcare worker staffing shortages in September, began administering the treatment to non-hospitalized patients with mild-to-moderate COVID-19 via subcutaneous injection, a much simpler method than infusing it intravenously.

When they compared outcomes a month after treatment in 969 patients who received the cocktail subcutaneously and 1,216 who got it intravenously, the percentages of patients who ended up requiring hospitalization were only minimally higher in the injection group, according to a report posted on Wednesday on medRxiv here ahead of peer review.

The combined risk of death, intensive care unit (ICU) admission and need for mechanical ventilation was less than half a percent higher with injection. Randomized trials are needed to accurately quantify differences between the two methods. But if it were proved to be safe, switching to injections would add treatment capacity, reduce appointment times, and expand staff available to administer treatment, the researchers said.

Click for a Reuters graphic tmsnrt.rs/3c7R3Bl on vaccines in development.

Aug 11 (Reuters) - The following is a summary of some recent studies on COVID-19. They include research that warrants further study to corroborate the findings and that has yet to be certified by peer review.
KIDS・2 DAYS AGO
Daily Mail

A mother-of-eight who spent years indoors because she was self-conscious about her appearance has died at the age of 47. 'Glamorous' Nicola Kilby avoided her reflection and refused to be photographed due to a rare illness which affected her entire body and altered the way she looked. The condition, known...
HEALTH・3 DAYS AGO
nypressnews.com

Blood clots: The popular drink linked to a higher risk of clotting ‘in the small arteries’

The study, co-authored by Shirley Beresford, senior associate dean and professor of epidemiology at the University of Washington School of Public Health, and co-author of the study, said: “Part of what makes this study important is that people who regularly drink soda or other sugary beverages tend to switch to artificially sweetened beverages to lose weight when the ideal is to substitute with water.”
PUBLIC HEALTH・19 HOURS AGO
Maya Devi

Doctors asked a woman with a rare condition to continue giving birth to avoid serious health issues. Mariem Nabatanz, a woman living in Uganda, an East African country, gave birth to 44 children by the age of 40 due to a health issue.
21 HOURS AGO

Aug 11 (Reuters) - The U.S. Centers for Disease Control and Prevention will no longer recommend quarantines or test-to-stay programs at schools or daycare centers for people exposed to COVID-19, the agency said in updated guidelines on Thursday.
EDUCATION・2 DAYS AGO