Inside The Blue Jays

Inside The Blue Jays is a FanNation channel dedicated to coverage of the Toronto Blue Jays. 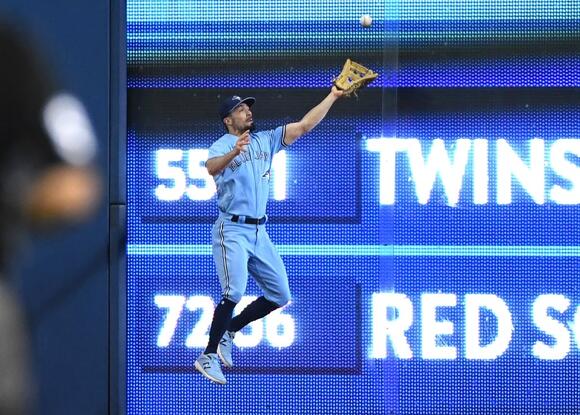 The Blue Jays reportedly discussed a trade involving Randal Grichuk and Jackie Bradley Jr. with the Milwaukee Brewers, per reports

Major league transactions are frozen but offseason news is not dead.

In the final minutes before the MLB lockout, the Milwaukee Brewers and Boston Red Sox pulled off a trade, swapping outfielders Hunter Renfroe and Jackie Bradley Jr. alongside prospects.

In his latest for The Athletic , Ken Rosenthal reported the Brewers discussed flipping Bradley Jr. in a deal for Toronto Blue Jays' slugger Randal Grichuk, "dangling" their former CF in other deals prior to pulling off the move with the Red Sox.

"Unlike the Renfroe deal, in which the Brewers parted with Bradley and two infield prospects," Rosenthal wrote. "A Grichuk trade would have been one-for-one."

With two years and over $20 million left on Grichuk's deal, the Brewers ultimately ended up with greater financial flexibility, flipping two prospects alongside Bradley in exchange for the cheaper Renfroe.

Had the Blue Jays traded Grichuk for Bradley, the deal would have kept Toronto's salary expenses relatively even in 2022 but may have brought a better fit to their fourth outfield role.

While Bradley was one of the worst offensive players in baseball last year, posting a .497 OPS in 428 plate appearances, he brings elite defense in centerfield, speed, and a left-handed bat the Blue Jays could use in their outfield mix. With Corey Dickerson in free agency, Josh Palacios is the lone lefty outfielder on Toronto's 40-man roster.

Even with his inconsistency, Grichuk has been the far better offensive player in recent years (.750 OPS as a Blue Jay), but it became increasingly hard to find him playing time down the stretch in 2021. He offers the same platoon advantage, hitting right, to all of Toronto's starting outfield and the Jays often opted to start Corey Dickerson or Jarrod Dyson in center over Grichuk when facing righties.

It was a deal that didn't happen, but Rosenthal's report gives us some insight into the options available if the Blue Jays seek to bring something new to thei fourth outfielder role.

Toronto Blue Jays: The Rebuild from 2018 to Now

Fans of the Toronto Blue Jays can now confidently say their favourite team is competitive. Not since this offseason has there been such sky high expectations, at least in the last five or so years. While the core of the 2015-2016 team is long gone, you can guarantee that this...
MLB・2 DAYS AGO
Inside The Phillies

With All-Star Shortstop Carlos Correa in the midst of free agency, why would he change his representation?
MLB・2 DAYS AGO
Inside The Phillies

One of the first black superstars in Philadelphia Phillies history, today we remember the legendary career of Dick Allen.
MLB・1 DAY AGO
Sportsnaut

Major League Baseball is expanding its use of robot umpires to call balls and strikes in Triple-A this upcoming season.
MLB・2 DAYS AGO

The Yankees landed three prospects in the Baseball America Top 100 on Wednesday, and also got three in Baseball Prospectus Top 101 released Thursday - but Jasson Dominguez, who was No. 87 in the BA rankings, was left out by BP.
MLB・2 DAYS AGO
Sports Illustrated

This is the last Five-Tool Newsletter before the results of the BBWAA Hall of Fame election are announced, so I’ll be revealing my hypothetical ballot today. Sure, it has no bearing on the actual process, but it’s fun. And as the lockout drags on, there aren’t too many better things to talk about. ...
NFL・1 DAY AGO
San Diego Union-Tribune

LA's lefty reliever is pitching to high schoolers to keep his arm loose and ready for the 2022 season amid the MLB lockout.
MLB・1 DAY AGO

That complicates things GREATLY.
MLB・2 DAYS AGO
105.7 The Fan

Baseball America released its annual preseason top 100 prospect rankings this week. The Baltimore Orioles had five players make the list with Adley Rutschman coming in at the top spot.
MLB・2 DAYS AGO
Audacy

Frequent Buck Showalter collaborator Brian Butterfield was briefly considered for a role on the Mets’ coaching staff but was turned down for his refusal to get vaccinated.
MLB・1 DAY AGO
Sports Illustrated

We asked our writers to advocate for one player on this year’s ballot to get elected to Cooperstown.
MLB・1 DAY AGO

The Dodgers have one of the longest and richest histories of getting players and turning them into big-league names. They've also shown an uncanny knack for being able to pluck guys from the international market and turn them into superstars. So when they announced their recent list of over 30 ...
MLB・2 DAYS AGO
Sportsnaut

The Cincinnati Reds are a part of MLB history, widely recognized as one of the most storied franchises in baseball.
NFL・1 DAY AGO
Inside The Phillies

Can Aaron Nola Finally Bounce Back in 2022?

Philadelphia Phillies pitcher Aaron Nola has the stuff to be elite. Can he have a bounce back season in 2022?
MLB・2 DAYS AGO
Inside The Dodgers

ESPN's Alden Gonzalez doesn't think that the Dodgers would be willing to sign Freeman to a long-term deal.
MLB・1 DAY AGO
92.3 The Fan

Were the Tampa Bay Rays onto something when they put tried to split their season between Florida and Montreal? Brian Anderson says no. Hear why when he joined Baskin and Phelps!
NFL・1 DAY AGO
USA TODAY

USA TODAY Sports broke down the 12 most intriguing cases on the ballot, with all you need to know heading into Tuesday’s momentous announcement.
MLB・20 HOURS AGO

Inside The Blue Jays

Inside The Blue Jays is a FanNation channel dedicated to coverage of the Toronto Blue Jays.