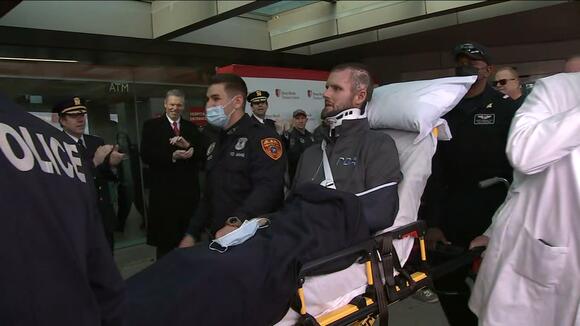 A Suffolk County police officer who spent weeks in a medically induced coma after a drunk driving crash on Long Island was finally released from the hospital Friday. Hundreds of Suffolk County police officers lined the exit of Stony Brook University Hospital as Officer Tim Thrane was officially discharged after suffering from life-threatening injuries. Officer Thrane was struck by a motor vehicle on November 2 while on foot setting up flares to conduct traffic control at the scene of a previous car accident. The father of three was rushed to Stony Brook, where he was intubated and placed in a medically induced coma for weeks. ALSO READ | President Biden to make at-home rapid tests free in new COVID plan

After a miraculous recovery at Stony Brook for over a month, Thrane and his family were met by applause and support from fellow brothers and sisters in blue. Thrane was greeted by his wife and three small children as he was wheeled out of the hospital in a stretcher. Raw Video: Officer Thrane leaves Stony Brook University Hospital

Suffolk Officer Tim Thrane, who spent weeks in a medically induced coma after being hit by an alleged drunk driver, was discharged to cheers Friday.

His neck was in a brace, and Thrane kissed and hugged each of his children. Stony Brook University Dr. James Vosswinkel, who treated Thrane, said the officer was close to death on several occasions. He said the force of the collision cracked Thrane's skull, which led to a life-threatening increase of blood pressure in his brain. Surgeons had to open his skull to let the blood out, and Thrane had to be resuscitated several times. Dr. Vosswinkel said Thrane then developed a condition causing his entire body to inflame and his lungs to almost collapse. Dr. Vosswinkel said four or five times, a ventilator wasn't enough to keep Thrane alive -- and doctors had to resort to rescue therapies just to keep oxygen in his body. After leaving Stony Brook University Hospital Friday morning, Thrane was taken to St. Charles Rehabilitation Center for inpatient therapy. He will have to learn how to walk and feed himself again. During the incident, all the ligaments in his neck were broken, and after spending four a half weeks unconscious in a hospital bed, most of his muscles have atrophied. Doctors are hopeful Officer Thrane will be able to be home with his family for Christmas. ALSO READ | Unlikely porch pirate caught on video stealing holiday package from home

Lauren Glassberg has more on the sneaky opossum caught on camera stealing earrings.

Also in attendance to greet Officer Thrane were three Suffolk officers who also have been gravely injured in the line of duty. Detective Nicholas Guerrero suffered a severe head injury when he was run over by a fleeing suspect in September 2014, Officer Mark Collins who was shot in 2015, and Detective Christopher Racioppo who was stabbed in the leg last April. "These three officers are here today to support Tim Thrane and really demonstrate to him that you can recover from these life-threatening injuries and return to work," Acting Suffolk Police Commissioner Stuart Cameron said. At the time he was struck, Thrane was standing near his vehicle when a driver in a GMC Yukon stopped to ask him a question. A Chevrolet pickup truck driven by 38-year-old William Petersohn then slammed into the Yukon, which spun around, hit the officer, and pinned him underneath it. The pickup then hit a marked police car. Petersohn was charged with DWI. ---------- * More Long Island news * Send us a news tip * Download the abc7NY app for breaking news alerts * Follow us on YouTube

A mother and her new son reunited Wednesday with a Suffolk County police officer who, with the help of a paramedic, helped deliver and save the baby born on Christmas Eve.
SUFFOLK COUNTY, NY・4 HOURS AGO
ABCNY

The 25-year-old gunman wrote his name in the sign-in book before the shooting.
BRONX, NY・11 HOURS AGO
ABCNY

A 17-year-old was caught with a gun on a subway train in Times Square Wednesday afternoon.
MANHATTAN, NY・1 HOUR AGO

Two juveniles are facing charges for a fire that shut down part of the Garden State Parkway for several hours.
OCEAN COUNTY, NJ・3 HOURS AGO
ABCNY

A college student from the Bronx has been indicted for selling 73 weapons and high-capacity magazines to an undercover NYPD officer.
BRONX, NY・4 HOURS AGO
ABCNY

A 35-year-old man was shot in the arm in the waiting room at Jacobi Hospital in the Bronx Tuesday.
NEW YORK CITY, NY・1 DAY AGO

They worked diligently to inform desperate families of their loved ones' fates, in the hopes that the confirmation of a parent's, sibling's or child's passing can somehow help start the grieving process.
BRONX, NY・6 HOURS AGO
ABCNY

The cause of death of Lauren Smith-Fields, a 23-year-old woman who was found dead after a date, has been revealed.
BRIDGEPORT, CT・1 DAY AGO

A 13-year-old boy was charged with arson, reckless endangerment and criminal mischief for allegedly setting the fire that burned through an East Village card shop earlier this month.
PUBLIC SAFETY・1 DAY AGO
ABCNY

Police are searching for an NYU professor who has been missing for several days.
MANHATTAN, NY・2 HOURS AGO
ABCNY

Hundreds of people came to the 32 Precinct on Wednesday night, packing 135th Street in Harlem and standing in the cold, to share the burden for a moment, of a pain that will last a lifetime.
NEW YORK CITY, NY・1 HOUR AGO
ABCNY

Authorities say the child poured gasoline onto a bonfire in the backyard, which caused two explosions.
ACCIDENTS・1 DAY AGO
ABCNY

The NYPD says the 38-year-old woman walked into the lobby of the building when the man slapped her backside.
QUEENS, NY・1 DAY AGO