ABCNY
2021-12-03
A probationary firefighter died after he suffered a medical episode during training at the FDNY Training Academy on Randall's Island on Thursday. New York City Fire Commissioner Daniel Nigro said Vincent Malveaux was engaged in functional skills training around 10:30 a.m. Nigro said the 31-year-old from Brooklyn was about three quarters of the way through the course when he started to feel sick and passed out. An ambulance was on the scene for the training session and Malveaux was immediately taken to Harlem Hospital. 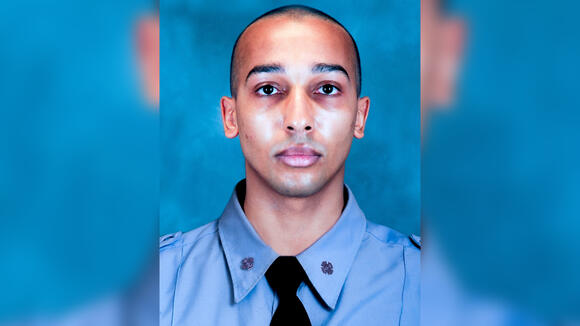 FDNY Probationary Firefighter Vincent Malveaux, 31, died after he suffered a medical episode during training at the FDNY Training Academy on Randall's Island on Thursday.

Nigro said Malveaux never regained consciousness and died around 6:30 a.m. Friday with his parents at his bedside. Malveaux "was doing fabulously" and "was extremely fit," according to the fire commissioner. The medical examiner will work to determine his exact cause of death. "We are devastated by his loss, and our entire city grieves together with his family, friends, and colleagues," Mayor Bill de Blasio said. Malveaux was sworn into the current Probationary Firefighter class on October 25 and was in week six of 18 weeks of training. Previously, he worked as an Emergency Medical Technician in the Bronx where he responded to thousands of calls for help, including throughout the coronavirus pandemic. "This is a heartbreaking loss of a young man who chose a life of brave service to others, first providing outstanding emergency medical care as an EMT in the Bronx and then training to be a New York City Firefighter," Fire Commissioner Daniel Nigro said. MORE NEWS: Columbia student dead, tourist wounded in random stabbings

He just couldn’t hack it. This is what training is meant to determine. Never overwork yourself, even during training. Your life is more important than your final score. Know your immediate limits and abide by them, firstly. Then, you can try again, once your body’s natural ability to adapt, kicks-in. RIP to the young buckarooskie.

An off-duty officer working security at an Upper West Side Duane Reade shot a suspect who police say had just stabbed a man.
MANHATTAN, NY・15 HOURS AGO
ABCNY

Operation 7: Save a Life- watch it only on ABC7NY

Police Commissioner Keechant Sewell posthumously promoted Rivera to detective, presenting the shield to his family in a solemn tradition of NYPD funerals.
MANHATTAN, NY・4 HOURS AGO

Rawleigh Thompson was heading to church on Sunday when a man pushed him from behind onto the subway tracks at the Fulton Street Station, directly in front of an oncoming train.
NEW YORK CITY, NY・10 HOURS AGO
ABCNY

There was no shortage of profound tributes to fallen NYPD Officer Wilbert Mora Tuesday night, but his greatest legacy may be the lives he's saving after his death.
NEW YORK CITY, NY・2 DAYS AGO

Submit your COVID questions for medical experts and we will get them answered on Eyewitness News.
NEW YORK CITY, NY・10 HOURS AGO
ABCNY

Hundreds of people came to the 32 Precinct on Wednesday night, packing 135th Street in Harlem and standing in the cold, to share the burden for a moment, of a pain that will last a lifetime.
2 DAYS AGO
ABCNY

Police say the driver was parked in the Westchester Square section when someone walked up to his vehicle and shot him in the leg.
BRONX, NY・3 HOURS AGO
ABCNY

First, a car plowed through the outdoor seating area at Friducha Mexican Restaurant in Greenpoint, then two burglars broke in, stealing cash and causing more damage.
BROOKLYN, NY・1 DAY AGO

NYPD officer Wilbert Mora, who was shot and his partner killed while responding to a domestic call in Harlem, has died from his injuries, NYPD Commissioner Keechant Sewell announced Tuesday.
NEW YORK CITY, NY・3 DAYS AGO
ABCNY

Taylor Swift, a multiple Grammy winner with a fervent fan base, has been plagued by stalkers at her Tribeca home as well as homes she owns in California and Rhode Island.
NEW YORK CITY, NY・7 HOURS AGO
ABCNY

The 27-year-old officer, a four-year veteran of the NYPD, suffered life-threatening injuries after being shot in the head Friday night in Harlem. His partner did not survive.
MANHATTAN, NY・3 DAYS AGO
ABCNY

The LIRR is preparing to suspend service Saturday as the winter nor'easter bearing down on the Tri-State area threatens to make for messy travel.
NEW YORK CITY, NY・10 HOURS AGO