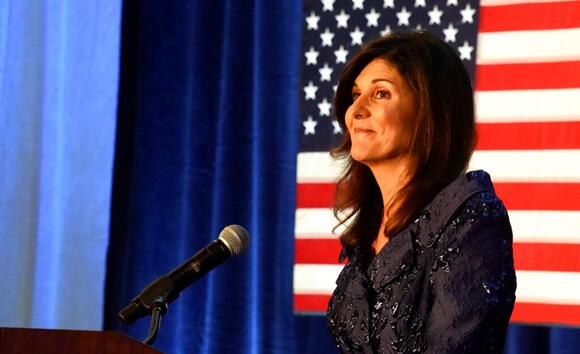 In a speech at South Carolina’s Citadel, where she was the first woman to receive the Citadel Republican Society’s Nathan Hale Patriot Award, Haley warned that if Biden continues to dismantle policies former President Donald Trump put in place, the country will be unrecognizable.

“In Washington, D.C., we have a president and a Congress who are leading the greatest nation in history toward ruin,” she warned, adding, “Joe Biden and today’s Democratic Party doesn’t even believe in America.”

The speech was Haley’s latest and most forceful criticism of Democratic control of Washington. She touched on all the hot political issues driving Washington debates and embraced those that voters seized on in dumping Democrats in Virginia and almost in New Jersey in last month’s elections.

“The American people said enough is enough. And what started last month will continue next year. We’ll win back Congress in 2022. We’ll win back the country in 2024,” said Haley.

There has been speculation that Haley is positioning to run in the 2024 GOP presidential primaries. Some have been skeptical because she clashed with Trump over the Jan. 6 Capitol protest, but Secrets is told that the two are on good terms and even huddled together last week.

If Trump makes good on his months of teasing and decides to run against Biden again, there are many GOP fans of a Trump-Haley ticket if he wins the nomination.

At the Citadel, she joined Trump and former Vice President Mike Pence as past winners of the award and the symbolic musket that comes with it.

A former South Carolina governor, she opened her address talking about her love for the Palmetto State and its place in American history. “I can’t imagine being from anywhere else. Can you?” she said.

As she ticked off the problems she sees with Biden, she also hit Vice President Kamala Harris and other top Democratic leaders.

For example, she blasted Biden’s open border policies that have resulted in historic levels of illegal immigration. The president has put Harris in charge of fixing the issue, but Haley noted that the vice president has failed.

“Right now our southern border might as well not exist,” she said. “That’s called a crisis. Yet, Kamala Harris is nowhere to be found,” she added.

And she tackled the so-called “woke” movement and attacks on the United States as a racist country. “Is America perfect? Of course not. But the principles at the heart of America are perfect. Now is no time to replace them. Now is the time to apply them more fully — to make our country freer, fairer, and better for all,” she said, according to a copy of her speech provided to Secrets.

“As governor, I saw our state move beyond hate and violence and show our nation a better way. And as ambassador, I saw that America is still the standard,” she concluded, adding, “The Republican Party was made for this moment. We’re the only ones who can unite our country. Who can rescue our cities from anarchy and anger. Who can move America forward and upward.”

Republicans are really picking people who wants to help destroy our country. People please wake up, they are going to finish what Donald Trump was going be and that's a Detator one's they win we will never vote again.They already changing the laws and voters rights from the American people. Stay focus

can she tell us what the Republican agenda is going to be for 2022. oh they decided they arent going to have one because they have no idea how to actually govern. funny they have had no agenda since 2016. and in that one they failed to pass even one of their ideas

With President Joe Biden’s first year behind him and the approaching midterm elections coming into clearer focus, an NBC News poll offered a dismal outlook for Democrats while suggesting Biden’s lost political identity paves the way for a shellacking in November.
PRESIDENTIAL ELECTION・18 HOURS AGO
WashingtonExaminer

They may be on opposite poles among House Republicans in their attitudes toward former President Donald Trump, but Rep. Liz Cheney got an unexpected compliment from firebrand freshman Rep. Marjorie Taylor Greene on her conservative voting record.
PRESIDENTIAL ELECTION・14 HOURS AGO
WashingtonExaminer

As Gov. Glenn Youngkin promised a "new day" in Virginia, former President Donald Trump was in a small prison town in Arizona relitigating the past.
POTUS・1 DAY AGO
POLITICO

“I get along great with Ron,” Trump said.
POTUS・8 HOURS AGO

"This November is about one thing: It's impeaching Joe Biden to stop this madness and to stop this illegitimate regime from destroying our nation," said Bannon.
PRESIDENTIAL ELECTION・15 HOURS AGO
Washington Examiner

Adam Laxalt isn’t overpromising. The Nevada Republican, his party’s leading candidate for Senate in the Silver State, offered a modest menu of agenda items he plans to pursue should the GOP win a majority of seats in the chamber in the midterm elections. Topping the list? Using control of the floor, and key Senate committees, to conduct aggressive oversight of President Joe Biden and his administration. Laxalt also would encourage the Republican majority he hopes to usher in to look deeper into the Russia investigation that consumed Washington during most of former President Donald Trump’s term.
PRESIDENTIAL ELECTION・21 HOURS AGO
Newsweek

The controversial remark came after Doocy asked the president if inflation will be a "political liability in the midterms."
PRESIDENTIAL ELECTION・8 HOURS AGO
The Guardian

Liz Cheney among those to condemn remarks by former House speaker as committee member Zoe Lofgren says: ‘I think Newt has really lost it’
CONGRESS & COURTS・20 HOURS AGO

While Republicans such as Greg Abbott and Ted Cruz have said Biden has an "open border," immigrations experts have said that is not correct.
PRESIDENTIAL ELECTION・11 HOURS AGO
NewsRadio 740 KTRH

SNL Skit Has 'Ted Cruz' Telling Donald Trump: 'Hit Me, Choke Me, Spit in My Face'

Activists warn that the failure to deliver on promises to Black voters could hurt Democrats in the midterm election.
LOS ANGELES, CA・19 HOURS AGO
USA TODAY

Biden was caught on a hot mic while responding to reporters' shouted questions before they were escorted from the East Room.
PRESIDENTIAL ELECTION・9 HOURS AGO
The Independent

Sen Bernie Sanders appeared eager to escalate the war between various factions of the Democratic Party on Sunday during an interview with CNN in which he stated his support for the censure and potential primarying of a senator who voted against the party’s effort to change the filibuster and pass voting rights legislation.Mr Sanders appeared on CNN’s State of the Union and said that the Arizona Democratic Party was “exactly right” to censure their state senator after Ms Sinema voted with Republicans last week against the Democrats’ voting rights push.“On that particular vote that she and [Sen Joe] Manchin...
CONGRESS & COURTS・1 DAY AGO

A retired US Army colonel who authored the now-infamous “coup PowerPoint” slide deck played a significant role in instigating the Arizona state senate’s sham “audit” of Maricopa County, Arizona ballots by convincing them that a notorious dot-com era inventor’s untested technology could spot enough fake ballots to undermine Joe Biden’s win in the Copper State. According to documents released by the pro-transparency group American Oversight, Arizona senators who ordered the partisan audit of the state’s most populous county did so on advice from Phil Waldron, a retired US Army colonel who became known for spreading baseless conspiracy theories about...
PRESIDENTIAL ELECTION・15 HOURS AGO
Newsweek

Joe Biden calls Fox News' Peter Doocy an SOB. He shouldn't have. Why it's not a big deal

Joe Biden called Peter Doocy of Fox News an SOB, evidently not realizing that his microphone was on. Right-wing outrage was the height of hypocrisy.
PRESIDENTIAL ELECTION・4 HOURS AGO
Newsweek

There was a moment at the first Trump-Biden debate, on September 29, 2020, in Cleveland, when the contours of the American future were laid bare.
PRESIDENTIAL ELECTION・21 HOURS AGO