Lucid and Nio Are Falling; Is the EV Stock Boom Over?

Share prices of Lucid Group (NASDAQ: LCID) and Nio (NYSE: NIO) are down over 10% since Monday. The broader market sell-off is weighing on even hot industries like electric car companies .

Industry watchers are likely wondering if this is a sign that the boom in electric vehicle (EV) stocks is over. Let's dive into Lucid and Nio to see if each company has what it takes to endure today's short-term pain for a potential long-term gain. 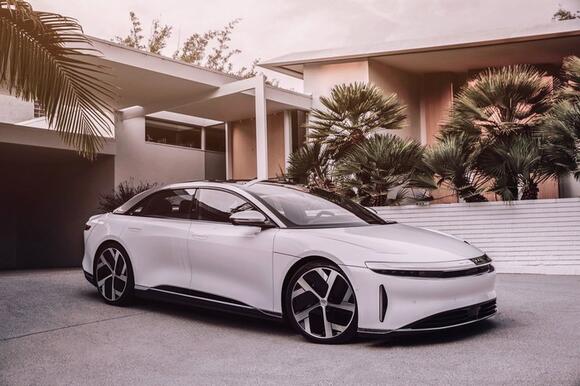 Bringing the heat without missing a beat

Lacking meaningful revenue and years away from profitability, Lucid certainly stands out as a growth stock that could come under fire from the ripple effects we're seeing in the market. The Nasdaq sell-off has so far been concentrated in growth companies that lack meaningful cash flow and earnings. For example, consider that companies like Apple , Microsoft , and Adobe are still hovering around all-time highs while Square, Twitter , Uber , and others are getting taken to the cleaners.

The big question is whether Lucid's technological edge is a big enough factor to protect its stock from a major sell-off. The reality is that no one can predict Mr. Market's mood at any given time. But we can look at the playing field and assess whether a company has a good chance of sustaining growth for years to come.

Lucid has a lot of things going for it . Its goal is to produce 20,000 cars in 2022. It already has over 17,000 reservations, meaning the cars are largely selling themselves thanks to a ton of press surrounding Lucid's range achievements and its MotorTrend 2022 Car of The Year award. Lucid also has plenty of cash, and management is confident it can raise more if needed by diluting its stock or tapping into the debt markets.

The challenge for Lucid will be ramping up production and rolling out lower-priced versions of its Lucid Air sedan that will access a larger addressable market. If Lucid can do that while maintaining its battery efficiency and range advantages, then it could very well be on its way to becoming a market leader in the luxury EV sedan space . Investors who believe in that mission should take Lucid stock's short-term ebbs and flows with a grain of salt.

Share prices of Nio are down a painful 45% from their high. But the company is reporting its best production numbers ever. From January to November 2021, Nio delivered 80,940 vehicles, which is four times higher than what Lucid plans to deliver in 2022. It also delivered 10,878 vehicles in November alone. However, there's concern that Nio is struggling to meet the full extent of its production capacity increases. Part of the issue is supply chain concerns. Another is that Nio hasn't released a new model since September 2020, but could unveil new ideas at Nio Day, which remains on schedule for Dec. 18.

Despite the competitive Chinese EV industry and the rapidly growing U.S. EV industry, Nio is well positioned to become a relevant participant in what is expected to be an ever-growing total addressable market . Unlike Rivian and Lucid that hope to scale production over the next few years, Nio's third-quarter 2021 deliveries were double what it did in Q3 2020 and quintuple its Q3 2019 deliveries. In short, the company has a three-year runway ahead of today's up-and-coming EV companies, which should help it retain an edge even as new competition enters the fold.

On track to deliver over the long term

Omicron COVID-19 variant concerns could take a toll on in-person events and even potentially impact automaker supply chains. However, both Lucid and Nio are proving they can navigate the challenging existing business climate. Lucid is confident in its ability to increase production and expand to customers around the world. Nio hit some bumps over the summer but is proving it has mostly overcome its issues. Other EV stocks may be in trouble . But Lucid and Nio remain two of the best in the industry.

10 stocks we like better than Lucid Group, Inc.
When our award-winning analyst team has a stock tip, it can pay to listen. After all, the newsletter they have run for over a decade, Motley Fool Stock Advisor , has tripled the market.*

They just revealed what they believe are the ten best stocks for investors to buy right now... and Lucid Group, Inc. wasn't one of them! That's right -- they think these 10 stocks are even better buys.

In this volatile market, finding solid businesses at a reasonable price is practically a luxury.
STOCKS・14 HOURS AGO
The Motley Fool

Investors looking to benefit from this hot tech trend should take a closer look at these stocks.
STOCKS・14 HOURS AGO
The Motley Fool

The stock price is down 55% off its recent high. Is it time to buy?
STOCKS・15 HOURS AGO
The Motley Fool

The company might be going private soon.
STOCKS・13 HOURS AGO

Shares of Hostess Brands got a boost from S&P Dow Jones Indices, which adjusted one of its indexes.
MARKETS・14 HOURS AGO
The Motley Fool

Some of last year's most promising growth stocks have fallen to the single digits right now.
STOCKS・14 HOURS AGO

Burned by the Stock Market? Consider These 3 ETFs Instead

Picking individual stocks isn't easy, and it can be time-consuming. Try this simpler solution instead.
ALEXANDRIA, VA・15 HOURS AGO
The Motley Fool

It's down almost 20% so far in January, so it would have to meaningfully reverse course.
BUSINESS・13 HOURS AGO
The Motley Fool

Better Buy: Bitcoin and Ethereum or Lucid and Nio?

The downturn in crypto and growth stocks is accelerating, but that doesn't mean you should sell.
STOCKS・19 HOURS AGO
The Motley Fool

Buy the Dip: 3 High-Risk Stocks to Consider Buying in 2022

While high-growth stocks continue to be volatile, this gas and chemical company is delivering solid, undramatic returns.
STOCKS・14 HOURS AGO
The Motley Fool

Microsoft is getting all the big headlines, but these two stocks were also on the rise.
STOCKS・1 DAY AGO
Motley Fool

Why Lucid Group, Nio, and Rivian Are All Down Again Today

Shares of several big-name electric vehicle (EV) stocks were trading down at midday on Thursday, after category leader Tesla (NASDAQ:TSLA) gave weak guidance for 2022. Here's where things stood as of noon ET for these three stocks, relative to their closing prices on Thursday:. Lucid Group (NASDAQ:LCID) was down about...
STOCKS・12 HOURS AGO
The Motley Fool

Tesla crushed on earnings -- but also crushed investor hopes for new car models in 2022.
STOCKS・12 HOURS AGO
The Motley Fool

Why Block Stock Tumbled by Nearly 5% on Thursday

A monster rival is apparently determined to go toe-to-toe with the company in its core activity.
STOCKS・8 HOURS AGO
Forbes

U.S.-listed Chinese premium electric vehicle maker Nio stock (NYSE: NIO) has declined by about 26% year-to-date in 2022, compared to the S&P 500 which is down by about 8%. While there hasn’t been any company-specific news driving the decline, Nio is being impacted by the broader sell-off in growth stocks, as investors brace for higher interest rates and tighter monetary policy this year. Moreover, the markets have also been concerned about the regulatory crackdown on technology companies in China, and greater scrutiny on Chinese companies listed in the U.S., and this also appears to be hurting Nio stock. With the recent sell-off, Nio stock remains down by about 60% from all-time highs seen in January 2021. So is the stock a buy at current levels of around $25 per share? Yes, we think there is a compelling case for investing in Nio at current levels.
STOCKS・18 HOURS AGO