Cathie Wood loves Coinbase (NASDAQ: COIN) and Robinhood (NASDAQ: HOOD) . The market is negative on both stocks. Coinbase stock is down 10% this year, and Robinhood shares have lost 31% since the company went public. So why is Wood so bullish?

In a word, crypto. Cathie Wood is a famous Bitcoin bull. While Wood is extremely bullish on Bitcoin -- her public price target is $500,000 by 2026 -- she is also hedging her bets. And we know this because Coinbase is one of her funds' major holdings. Three of her funds have invested a combined $1.65 billion in Coinbase, making it the #3 holding after Tesla and Teladoc Health . Why is she so passionate for this stock? Coinbase is the place you go when you want to buy altcoins (i.e., Coins That Are Not Bitcoin). While Square only has Bitcoin on its Cash app, and Robinhood has only a handful of coins, Coinbase has over 120 different crypto coins you can buy. 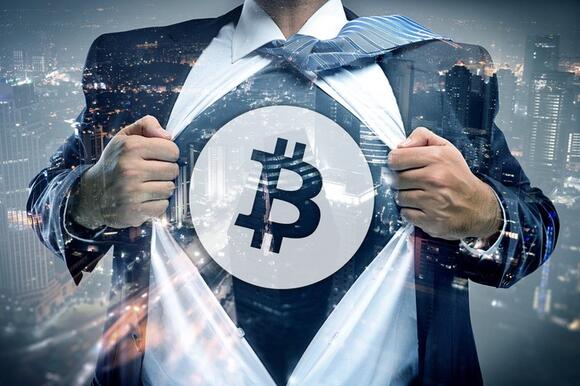 Bitcoin and the Not Bitcoins

Coinbase is where you go to buy Solana, Cardano, and Avalanche . These are the super-fast blockchains that blow the old ones out of the water. In her public statements, Wood is bullish on Bitcoin and Ethereum , and she's "studying" the rest of the crypto universe.

Coinbase is where you go to study. Most observers of the crypto landscape agree that the vast majority of coins are effectively worthless, while a handful (maybe a dozen) coins are incredibly under-valued right now. I think Wood is right on Bitcoin. It is "digital gold," and as an asset class, it is under-represented in institutional holdings. So while a $500,000 call on the coin is really bullish, that could definitely happen.

The weak part of Wood's argument (and she knows it) is the idea that Ethereum is all the altcoin you need. No, sorry, Ether is slow as molasses. So while a sizable number of applications are already built on Ethereum, the underlying blockchain is not fast enough to scale. The upshot is that the "gas fees" to get on the Ethereum blockchain now are ridiculously high. So while Ethereum was your best option three or four years ago, it's a poor option right now.

What about Ethereum 2.0? Here's what Ben Edgington, one of the guys working on the upgrade, said to Cointelegraph:

"The move to proof-of-stake will not immediately provide any significant extra throughput to the Ethereum chain, so I don't expect it to have a measurable effect on gas prices. The scalability strategy in Ethereum now revolves around layer-two solutions like the various roll-ups that are currently being deployed. Once The Merge is done, we will focus on providing data shards within the Ethereum protocol that will allow roll-ups to scale massively."

In other words, an Ethereum blockchain that can compete with the new wave is years away, not months. This is why Cathie Wood owns so much Coinbase stock; Bitcoin and Ethereum are insufficient.

The crypto universe is in a transitional whirlwind. The price of Solana's crypto jumped 10,000% in less than a year. That sort of insane gain doesn't happen when all the important discoveries have already been made. People need speed, and they need it now. Any investors who want those sorts of dramatic returns are opening up accounts at Coinbase, which is the top dog and first mover in crypto shopping.

Robinhood is the King of Memes

While Wood is not as ecstatic about Robinhood as she is about Coinbase, it is a major holding in her various funds. Back in 2018, Robinhood made the decision to list Dogecoin , the first "meme" coin and one of the more useless coins out there. Dogecoin offers no promising tech advancement for crypto developers. It was designed as a joke . Nonetheless, the coin has skyrocketed for early buyers. 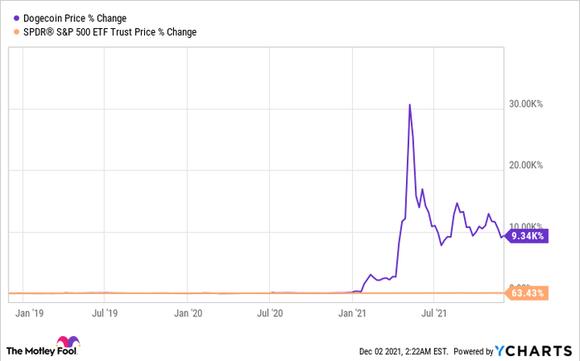 Of course, when a major exchange lists a coin for sale, that is a validation of the coin's value. So Robinhood can be criticized -- and has been criticized -- for offering a joke coin to the public.

Why is Wood buying Robinhood? She believes the crypto revolution is a people-led movement. It's been ordinary people who have bought Bitcoin, and it's the financial institutions that are late to the party. Indeed, her investment thesis for Bitcoin is that sooner or later the "smart money" will follow the popular will. So she prizes Robinhood for its emphasis on popularity and giving the people what they want.

If you're serious about crypto and blockchain technology, buy shares of Coinbase. And if you think crypto is a lot of fun, add Robinhood as well.

10 stocks we like better than Coinbase Global, Inc.
When our award-winning analyst team has a stock tip, it can pay to listen. After all, the newsletter they have run for over a decade, Motley Fool Stock Advisor , has tripled the market.*

They just revealed what they believe are the ten best stocks for investors to buy right now... and Coinbase Global, Inc. wasn't one of them! That's right -- they think these 10 stocks are even better buys.

Shiba Inu has fallen sharply, but there is still plenty of downside left.
STOCKS・2 HOURS AGO
Markets Insider

The crypto market is getting crushed due to mounting risk factors.
COMMODITIES & FUTURE・16 HOURS AGO
The Motley Fool

The e-commerce platform was on the receiving end of some negative commentary from Wall Street, but the news wasn't all bad.
STOCKS・18 HOURS AGO
The Motley Fool

Another volatile week has some altcoins screaming "uncle."
STOCKS・19 HOURS AGO

These companies wouldn't be worth a second look, even in a less volatile market.
STOCKS・3 HOURS AGO
The Motley Fool

Investing in a volatile market is never easy; that's why long-term strategies tend to deliver the best results.
STOCKS・1 HOUR AGO
The Motley Fool

E-commerce has made industrial one of the hottest real estate subsectors today.
REAL ESTATE・2 HOURS AGO

Maintaining its position as one of the world's largest digital currencies won't be easy for SHIB.
MARKETS・4 HOURS AGO
The Motley Fool

1 Infrastructure REIT to Profit From the 5G Rollout

3 Unstoppable Investments Everyone Needs in Their Portfolios

The growth potential for some of the famed stock picker's stocks are too big to ignore.
STOCKS・3 HOURS AGO
The Motley Fool

This stock could still be a huge winner.
STOCKS・1 HOUR AGO
The Motley Fool

These 2 Dow Stocks Made All the Difference Friday

Markets rebounded in a nice rally.
STOCKS・14 HOURS AGO