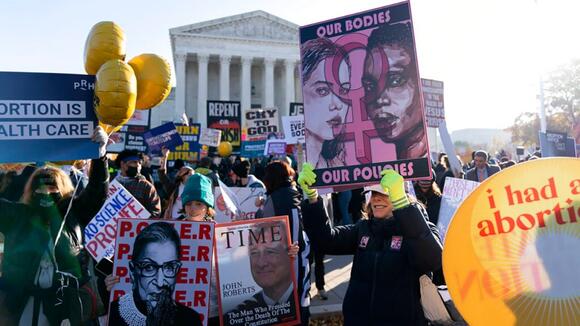 ( The Hill ) — More than 65 million American women would immediately lose access to an abortion in their home states if the U.S. Supreme Court strikes down the landmark case that established the right to seek the procedure nearly half a century ago.

Existing laws on the books in 20 states ban abortions or impose substantial restrictions on women or on abortion providers. Those laws are on hold, either blocked by courts or superseded by the high court’s 1973 decision in Roe v. Wade that protected a woman’s right to an abortion without excessive restrictions.

But the high court is now considering arguments in another case, Dobbs v. Jackson, that gives the conservative majority their most significant chance in decades to gut the Roe precedent. In oral arguments Wednesday, the six conservatives seemed open to allowing a Mississippi law that bars abortions after 15 weeks to stand, undermining the core principles of the Roe verdict.

The court is not expected to rule on the case for months; typically, justices wait to release opinions in their most explosive cases until the end of their yearly term in June.

But the scenario in which justices overturn Roe is one for which conservatives have been preparing for decades, by laying a foundation of laws that either sought to bring a challenge to the high court or snap into effect once abortion laws changed.

Twelve states — Arkansas, Idaho, Kentucky, Louisiana, Mississippi, Missouri, North Dakota, Oklahoma, South Dakota, Tennessee, Texas and Utah — have passed laws that would bar all or nearly all abortions, written in a way that would allow them to take effect after the Supreme Court overturns Roe, according to the Guttmacher Institute, a pro-abortion rights research institution.

Those laws vary by state, but they all have language that describes how they would take effect, said Elizabeth Nash, director of state issues at the Guttmacher Institute. Some require the state attorney general to certify that the Supreme Court’s decision allows their state to ban abortions.

Eight states — Alabama, Arizona, Arkansas, Michigan, Mississippi, Oklahoma, West Virginia and Wisconsin — still have abortion bans on the books that were passed years, and sometimes decades, before Roe was decided. Texas has a similar law that is under injunction by a federal court.

But if the precedent is struck down, those laws would be enforceable once again, and the Supreme Court ruling would likely allow Texas’s law to take effect.

“If Roe is overturned, then states with pre-Roe bans could take the steps necessary to implement them,” Nash said.

The 17 states, some of which have laws that both predate and post-date the Roe decision, are home to a collective 51 million women. Georgia, Ohio and South Carolina, which have each passed restrictions on abortion that were ruled unconstitutional under Roe but could be reinstated depending on the court’s ruling, are home to another 14 million women.

“States have really caught on fire with the hope and the anticipation of this very thing. So a lot of states are poised and ready for the Dobbs decision,” said Sue Swayze Liebel, state policy director at the Susan B. Anthony List, a group that supports candidates who oppose abortion rights. “States have been rushing to pass heartbeat bills and trigger laws and early bans on abortion as far back as they think they can go.”

Some of the laws that predate Roe harken back nearly a century or more, to a time when no state explicitly allowed abortions and before the advances of modern medicine.

In Michigan, Gov. Gretchen Whitmer (D) has called on the legislature to repeal a 1931 law that makes a felony of administering medicine or performing an abortion. An even older statute has banned abortions there since at least the 1840s. After oral arguments this week, state Senate Majority Leader Mike Shirkey (R) shot down Whitmer’s proposal.

“Michigan has terrific laws already in place. They’ve been superseded by the former Supreme Court ruling. And if that is reversed, then Michigan stands very well positioned,” Shirkey told the Michigan Public Radio Network.

Roberts and Roe: The Supreme Court considers a narrow question on abortion

Arizona legislators banned abortion, and even restricting birth control, in 1956. In Arkansas, a 1969 abortion ban updated a statute on the books since 1875. Oklahoma’s ban was first passed in 1910 and updated several times in the intervening century. A Wisconsin law dating to 1849 makes it a felony for anyone other than a pregnant woman to “intentionally destroy the life of an unborn child.”

Of the 17 states that would be in a position to ban or severely restrict abortions in the aftermath of a decision striking down Roe, all but two, Michigan and Wisconsin, have Republican attorneys general who have signaled they would enforce the bans. Twenty-four Republican attorneys general filed an amicus brief with the Supreme Court supporting the Mississippi law and encouraging justices to strike down Roe.

Missouri Attorney General Eric Schmitt (R) “has the power to, and will, enforce Missouri’s pro-life law if the Supreme Court overturns Roe v. Wade. We have vigorously defended Missouri’s law against legal challenges, particularly the provision that bans abortions based solely on a prenatal Down syndrome diagnosis,” said Chris Nuelle, Schmitt’s spokesman.

Here are the fastest-growing California counties

From 2019 to 2020, the U.S. population grew by .35%, its slowest rate since 1900. Declining births, increasing deaths largely due to the graying Baby Boomer population, and a crackdown on immigration have contributed to many states seeing net population losses in recent years. But in other pockets of the country, populations are growing. These shifts […]
CALIFORNIA STATE・19 HOURS AGO
KTLA

Gov. Gavin Newsom and state lawmakers announced on Tuesday that they reached an agreement on a framework to again require employers to provide paid COVID-19 supplemental sick leave. Under the framework, employees would continue to have access to paid sick leave through Sept. 30, 2022, the governor’s office announced. It would be retroactive and cover COVID-19 […]
CALIFORNIA STATE・19 HOURS AGO
KTLA

The conservative-dominated Supreme Court on Monday agreed to hear a challenge to the consideration of race in college admissions, adding affirmative action to major cases on abortion, guns, religion and COVID-19 already on the agenda. The court said it will take up lawsuits claiming that Harvard University, a private institution, and the University of North Carolina, a […]
LOS ANGELES, CA・1 DAY AGO
KTLA

New Mexico Gov. Michelle Lujan Grisham (D) has registered to become licensed as a substitute teacher as part of a push to address COVID-19-related staffing shortages at schools and child care centers.
EDUCATION・2 DAYS AGO

Six men have been indicted on federal charges for allegedly being part of a scheme to smuggle weapons and ammunition to a violent Mexican cartel, officials announced Monday. Four of the men were arrested Jan. 19 as part of Operation Infidelis, which targeted a weapons trafficking organization that worked with the Cartel Jalisco Nueva Generacion, […]
WHITTIER, CA・1 DAY AGO
KTLA

A motorist who noticed a pickup truck and trailer outside a northern Nevada construction company the day before Christmas provided a key clue to the arrest of a California man accused of stealing explosives and driving them to suburban Las Vegas, federal authorities said Tuesday. Evan Ray Atkinson, 38, was arrested Jan. 4 at a […]
LAS VEGAS, NV・16 HOURS AGO
KTLA

California appears to have passed peak of omicron variant wave

California showed signs it turned the corner on the omicron wave of the coronavirus pandemic, with infection rates falling and hospitalizations well short of the overwhelming deluge officials feared a few weeks ago. Over 15,000 people are hospitalized with coronavirus, a huge figure but well short of last January’s peak of about 22,000 and half […]
CALIFORNIA STATE・10 HOURS AGO
KTLA

Gun owners would be required to carry liability insurance and pay a fee in the city of San Jose that officials say would be the first of its kind in the United States, following a trend of other Democratic-led cities that have sought to rein in violence through stricter rules. The City Council is expected […]
SAN JOSE, CA・18 HOURS AGO

California Attorney General Rob Bonta on Tuesday urged people to beware of illegitimate COVID-19 testing sites that have been popping up around the state amid an increased demand for the tests. Kimberly Cheng reports for the KTLA 5 News at 3 on Jan. 25, 2022.
CALIFORNIA STATE・14 HOURS AGO
KTLA

An unvaccinated former Alaska Gov. Sarah Palin tested positive for COVID-19 Monday, forcing a postponement of a trial in her libel lawsuit against The New York Times. The Republican’s positive test was announced in court just as jury selection was set to begin at a federal courthouse in New York City. Palin claims the Times […]
PUBLIC HEALTH・1 DAY AGO
KTLA

House Speaker Nancy Pelosi announced Tuesday she will seek reelection, ending speculation that she would retire as Democrats face the threat of losing control of Congress in the 2022 midterms. “While we have made progress, much more needs to be done to improve people’s lives,” the 81-year-old Pelosi said in an online video. “This election […]
CONGRESS & COURTS・13 HOURS AGO
KTLA

The number of Western monarch butterflies overwintering in California rebounded to more than 247,000 a year after fewer than 2,000 appeared, but the tally remained far below the millions that were seen in the 1980s, leaders of an annual count said Tuesday. The Western Monarch Thanksgiving Count revealed the highest number of butterflies in five […]
CALIFORNIA STATE・15 HOURS AGO

Former President Donald Trump dominates the field of potential contenders for the 2024 Republican presidential nod, but Florida Gov. Ron DeSantis is an early favorite for the nomination in the event that Trump doesn’t run again, according to a new Harvard CAPS/Harris poll shared exclusively with The Hill.
PRESIDENTIAL ELECTION・1 DAY AGO
KTLA

A California lawmaker known for tightening restrictions on school vaccine laws will propose a bill Monday to close a loophole in the state’s requirement that children receive COVID-19 shots. State Sen. Richard Pan (D-Sacramento) will announce Monday morning a bill to add COVID-19 vaccines to California’s list of required inoculations for attending K-12 schools, a […]
CALIFORNIA STATE・2 DAYS AGO
KTLA

Rick Caruso, the shopping mall magnate who is considering a run for mayor of heavily Democratic Los Angeles, said Monday he has changed his political affiliation from no party preference to Democrat. Caruso dropped his longtime Republican affiliation in favor of no party preference when he previously considered running for mayor, the L.A. Daily News reported in 2012. He has […]
LOS ANGELES, CA・1 DAY AGO
KTLA

The District of Columbia and three states are suing Google for allegedly deceiving consumers and invading their privacy by making it nearly impossible for them to stop their location from being tracked. In the lawsuit filed Monday in a District of Columbia court, D.C. Attorney General Karl Racine alleges Google has “systematically” deceived consumers about […]
INTERNET・1 DAY AGO

When your COVID test expires (yes, every at-home COVID tests expires) should you still use it - and trust it?
PUBLIC HEALTH・21 HOURS AGO
KTLA

Shark attacks increased around the world in 2021 following three consecutive years of decline, though beach closures in 2020 caused by the COVID-19 pandemic could be making the numbers seem more dramatic than they are, officials said Monday. Researchers with the International Shark Attack File recorded 73 unprovoked incidents last year, compared to 52 bites […]
ANIMALS・1 DAY AGO
KTLA

What is a ‘variant of high consequence’?

As of yet, no variants of SARS-CoV-2 have met the Department of Health and Human Service's criteria for the most concerning classification.
PUBLIC HEALTH・1 DAY AGO
KTLA

Controversial SAT exam will be shorter, move to all-digital format

The SAT exam will move from paper and pencil to a digital format, administrators announced Tuesday, saying the shift will boost its relevancy as more colleges make standardized tests optional for admission. Test-takers will be allowed to use their own laptops or tablets but they’ll still have to sit for the test at a monitored […]
EDUCATION・23 HOURS AGO