A Best In Breed Digital Advertising Company For A Changing Market

The Trade Desk (NASDAQ: TTD) provides a platform for advertisers and their agencies to make programmatic media buys, track campaigns, and use data to optimize digital advertising. The company operates on the demand side of the industry and their omnichannel offerings include video, social media, display, and connected television (CTV). The Trade Desk has been public since September of 2016.

Advertising is changing. Cable and satellite television have been in decline for years. Only a little over half of the United States population has cable television subscriptions these days. That figure drops dramatically for those under age 49. And of those adults under age 29, who are a key target demographic, only about a third get their television through cable or satellite. Connected television, that which is viewed using an internet connection, is on the rise . Other digital advertising mediums like video and social are also gaining market share . Advertisers and their agencies need access to this media in order to target their primary audiences. 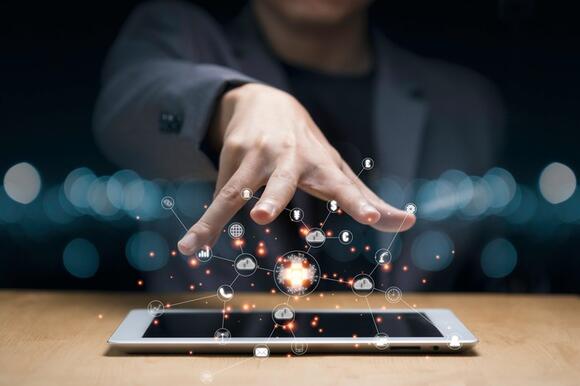 The Trade Desk provides this access through their programmatic digital advertising platform. While traditional advertising is inefficient and only loosely targeted, digital advertising with The Trade Desk is efficient, targeted, and data driven. The company reports that it currently has access to over 87 million households and 120 million devices in the United States. The recent announcement of an expanding partnership with NBCU's Peacock CTV service will create additional opportunities.

Television is going through a generational shift from linear to digital, accelerated by the global pandemic, and Peacock has been a case study in how broadcast leaders are adapting and leading in this new normal, CTV is one of the industry's fastest-growing channels, because marketers get to apply data-driven precision to their massive TV campaigns for the first time. The addition of Peacock to our CTV advertising options represents the kind of premium content, at scale, that our clients are demanding." -Tim Sims, Chief Revenue Officer, The Trade Desk.

The Trade Desk's revenue has made a meteoric rise over the last several years. Since 2017, the revenue has grown at a compound annual growth rate (CAGR) of over 40%. This is despite a slowdown in advertising spending during 2020 due to the pandemic . As pictured below, revenues have risen from $308 million in 2017 to over $1.1 billion in 2021 using management's fourth quarter guidance. The CAGR for 2021 is again above 40% showing the company's resiliency.

The Trade Desk is also profitable, which is somewhat rare among high-growth tech companies. The company has posted $256 million in operating profits over the trailing twelve months (TTMs). The SaaS Rule of 40 is a metric commonly used to measure a growing company's growth and profitability. If a company's growth and profit margin percentages add up to more than 40, is generally viewed as worthy of investment. The Trade Desk has a Rule of 40 value greater than 65 using the 2021 guided growth and TTM profit margin. This is excellent news for investors.

The company is spending a lot of money to achieve this growth and doing it efficiently. The SaaS Magic Number measures the efficiency of sales and marketing spending in terms of gains in overall revenue. A metric over 0.75 is generally considered to be efficient and indicates that the money spent is well worth it in the long run. The Trade Desk posted a highly impressive Magic Number well over 1.25 as of the last quarter. With the total advertising market approaching $1 trillion globally, this efficiency will power growth.

The international market is relatively untapped for The Trade Desk, and management has expressed an interest in pushing the brand into these markets. As of the latest report, less than 15% of billings were for areas outside of the United States. This represents a massive opportunity to expand.

The valuation is concerning in the short-term

The Trade Desk stock has risen over 35% over the last month after having been down slightly for most of the year. This has pushed the forward PS ratio over 43. High quality transformative companies typically don't come cheap, and The Trade Desk is no exception. The PS ratio falls to just over 33 on a forward 1 year basis, as shown below. These metrics mean the stock may be quite volatile in the short-term and would likely fall more than the overall market in the event of a broad downturn. 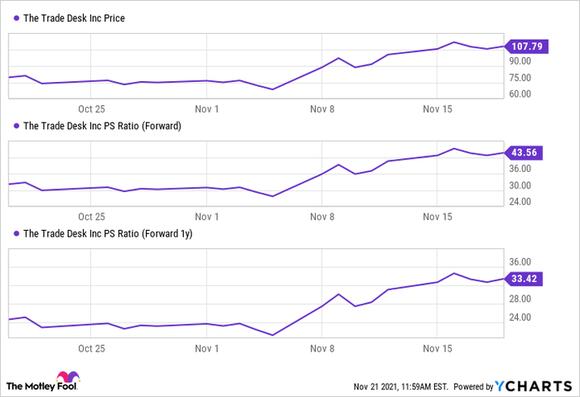 The way in which people receive media is changing and this has spurred a fundamental shift in the way advertisers and their agencies reach their target audiences. Video, display, and CTV advertising is the future and The Trade Desk is the best-in-breed stock in the sector. Revenue growth is dazzling and the SaaS metrics indicate an efficient management team. While the stock may be bumpy in the short-term, The Trade Desk is poised to be a long-term market out-performer.

They just revealed their ten top stock picks for investors to buy right now. The Trade Desk is on the list -- but there are nine others you may be overlooking.

What is "Web 3.0," and how can investors play this growth area?
MARKETS・5 HOURS AGO
The Motley Fool

These charts reveal the importance of looking at the bigger picture when studying the stock market and investing during low points.
STOCKS・7 HOURS AGO
The Motley Fool

4 Index Funds I Predict Will Beat the Market in 2022

The global economy's underpinnings are changing in a big way, which will help some industries while hurting others.
STOCKS・5 HOURS AGO
The Motley Fool

These two investments combine the right balance between downside protection and upside potential.
STOCKS・1 DAY AGO

After a volatile trading, the Trump-affiliated stocks ended the week on a down note.
STOCKS・1 DAY AGO
The Motley Fool

At a market cap of just under $900 billion, it is within striking distance of reaching a rare financial designation.
MARKETS・2 DAYS AGO
The Motley Fool

The social media giant is expanding a feature designed to lure creators to its platforms.
STOCKS・2 DAYS AGO

Intuit CEO on What Small Businesses Need for Growth

From Mailchimp to QuickBooks, Intuit aims for a 100% success rate for its small business customers.
SMALL BUSINESS・2 DAYS AGO
The Motley Fool

Against the backdrop of a 7.5% slide for the Nasdaq, the Trump-backed stock has surged 58% in 2022.
STOCKS・2 DAYS AGO
The Motley Fool

Here's why this massive REIT could still have plenty of growth potential.
STOCKS・2 DAYS AGO
Advertising Age

Why 2022 will be a critical year for digital video advertising

Last year was a tipping point for the industry. Media consumption reached an all-time high, and the continued rise of streaming and connected TV created more opportunities for advertisers to reach their consumers. Audiences demanded more premium streaming content—and advertising dollars followed the viewers. We saw this truly materialize during the latest Upfront as clients significantly expanded their investments in premium digital video.
INTERNET・3 DAYS AGO
insideradio.com

It’s no secret that digital is the growth engine for Townsquare Media with nearly half its revenues derived from digital solutions. But it is digital advertising, not subscription-based digital marketing solutions, that has emerged as the fastest growing part of the small and medium market specialist, CEO Bill Wilson said Wednesday at the Sidoti Virtual Investor Conference 2022.
BUSINESS・3 DAYS AGO
The Drum

Within the marketing communications ecosystem, there has been a surge in the availability of green energy solutions and products. While the implementation of these products is imperative for the industry to make a climate-friendly transition, Jesper Benon, co-founder of SeenThis, argues for the need to also reduce the amount of energy consumed by digital advertising.
ENERGY INDUSTRY・5 DAYS AGO
investmentu.com

3 Advertising Stocks to Buy for The New Digital Age

The advertising industry has been in a slowly shifting state for decades. Companies like Google and Facebook have created more targeted advertising networks than ever before. Due to this, ad spending has been transitioning from traditional methods to digital ones. More recently, the COVID-19 pandemic rapidly accelerated this trend. In light of this, there’s never been a better time to take a look at advertising stocks.
MARKETS・9 DAYS AGO
Forbes

Change Is Coming To Digital Advertising In 2022: Five Strategies For Online Ad Success

Anatolii Labinskyi is the Founder & CEO of Golden Stream Media where he leads e-commerce entrepreneurs to generate 7-figure results. What should your business do to become more successful in online advertising? With a well-researched plan, you’ll be prepared to meet your customers where they are and sell your solution with ease.
INTERNET・10 DAYS AGO
aithority.com

(Reuters) – Twitter Inc has picked up a minority stake in Aleph Group Inc, the digital advertising firm said on Tuesday as it seeks to go public in the United States. Aleph did not reveal any financial terms of the investment but said Twitter’s stake buy would help the company expand its educational tech platform.
BUSINESS・12 DAYS AGO
RichmondBizSense

The Pitch: Advertising and marketing news for 1.11.22

Before 2020, it wasn’t uncommon for West Coast investors to stop founder Kristen Wiley mid-pitch when she mentioned her startup was based in Orlando. “They said, ‘I don’t want you to waste my time, because you’re in Florida,’” Wiley told Orlando Inno. However, that...
ORLANDO, FL・12 DAYS AGO