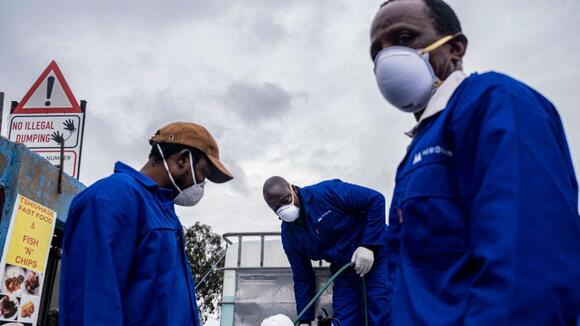 New COVID-19 cases in South Africa have tripled in three days, according to new figures released by the country's health ministry on Thursday, sparking concerns over the spread of the new omicron variant.

South Africa is entering its fourth wave of COVID-19 infections due to the omicron variant, Minister of Health Joe Phaahla added at a media briefing on Friday.

He said that the infections with the new variant have been detected in seven out of the country's nine provinces. Since omicron was first detected in the country eight days ago, cases have risen steadily, he said on Friday.

In the last 24 hours, there were 11,535 new cases recorded in South Africa, according to the National Institute for Communicable Diseases.

“Today, as we enter the fourth wave with a new variant, we can see confirmation of this warning. We have moved from a total of around 2,465 new cases last Thursday when this variant was announced to yesterday’s high of 11,535. A rise of just over 9,000 cases per day within seven days," he said.

"We can still manage this in a manner where government doesn't have to invoke serious restrictions over the next few days if we all just do our basic duties of the safety measures, but also if more and more of us who are eligible ... approach their nearest vaccination sites," Phaahla said.

The omicron variant was announced by scientists last week in South Africa and has since been discovered in more than 20 countries.

The U.S. has already restricted travel from South Africa, Botswana, Zimbabwe, Namibia, Lesotho, Eswatini, Mozambique and Malawi in response to the new variant.

New omicron variant cases in the U.S. have been detected in five states — California, Minnesota, Colorado, New York and Hawaii.

While quite contagious, this variant is not much more than that of a common cold. The doctor that discovered it said as much themselves (not exactly same words). Why does the government have to play up people's fears? I have multiple underlying health problems, I caught delta variant (I'm guessing due to symptoms) but was verified as Covid by a testing site and after a few weeks I am back to almost normal for myself. Just need to gain back the weight I lost from the lack of appetite.

I found the omicron on two tires on my truck, Fauci told me to put a mask on the grill and change the oil. it seems to be working.

people! don't fall for anymore lies fron you corrupt leaders. scientists and doctors that discovered this say it is unusual but very weak. our dictators will play it up and gets as much milage out of it a the can. probable use it to keep mail in voting.....

A ‘Stealth’ Variant of Omicron Is Taking Over COVID-19 Infections

Even as Omicron infections in the U.S. and have peaked, a new variant on the block will keep health authorities on tenterhooks for now. Called 'Stealth Omicron', it is one of the substrains that emerged with Omicron and is reported to be more transmissible than Omicron itself, Euronews reported. According...
PUBLIC HEALTH・11 HOURS AGO
pharmatimes.com

The UK government has warned that more than 96% of pregnant people admitted to hospital with COVID-19 symptoms were unvaccinated, in analysis between the months of May and October in 2021. The government has shared that the COVID-19 vaccinations are safe for pregnant individuals and have no impact on fertility.
WORLD・14 DAYS AGO
hawaiipublicradio.org

As COVID-19 cases surge on Oʻahu, the city is expanding hours for testing at the Daniel K. Inouye International Airport. Every Monday, Wednesday and Friday, testing will be held from 9 a.m. to 9 p.m. All other days the test site will operate from 9 a.m. to 5 p.m.
HONOLULU, HI・4 DAYS AGO
CBS News

Appointments for COVID-19 tests are unavailable at several free sites in the Twin Cities amid growing concern over the omicron surge of the pandemic. Vault Health is experiencing unprecedented demand at its free state testing sites at the same time workers' coronavirus infections are hurting its capacity to collect and process tests. Spokeswoman Kate Brickman said people with at-home tests can help by using them first, ahead of the expiration date, rather than saving them and coming to test sites.
MINNESOTA STATE・12 DAYS AGO
KTVU FOX 2

LOS ANGELES - California Gov. Gavin Newsom was in South Los Angeles Wednesday afternoon to discuss the state’s response to the COVID-19 pandemic. The governor visited a testing site in Paramount Park to highlight his COVID-19 Emergency Response Package. His focus, amid the omicron surge, is to keep schools open, keep the economy moving, ramp up vaccines, boosters, and statewide testing.
LOS ANGELES, CA・12 DAYS AGO

New COVID Variant Is On The Rise As Omicron Declines

The new variant has already been reported in numerous countries.
SCIENCE・7 HOURS AGO
WOOD TV8

Anthony Fauci said Sunday he is "as confident as you can be" that most states in the U.S. will reach a peak in omicron infections over the next several weeks.
PUBLIC HEALTH・22 HOURS AGO
Business Insider

Employees will have to submit proof of COVID-19 booster shots or take rapid tests before entering a store or office starting February 15.
MEDICAL & BIOTECH・7 DAYS AGO
Business Insider

A combination of vaccination and natural infection seems to offer enhanced immunity across variants.
SCIENCE・2 DAYS AGO

Could Ethiopia’s ‘false banana’ be a wonder crop in face of the climate crisis?

The climate crisis, exacerbated by the Covid pandemic, has increased food insecurity for millions of people, particularly in the Global South.The United Nations warns that over the next 30 years, food supply and food security will be severely threatened if more is not done to tackle global heating, and crops’ vulnerability to increasing extremes such as prolonged droughts, heatwaves, flash-flooding and insect infestations. For example, global yields of both maize and wheat are projected to significantly decline due to climate impacts caused by emissions from fossil-fuel burning. In Africa and Central America, nearly 950 million metric tonnes of maize is...
AGRICULTURE・2 DAYS AGO
AFP

Hong Kong authorities said Sunday that one of 77 hamsters handed in by pet owners for a Covid cull has tested positive, as thousands of city residents remain under lockdown to combat an outbreak. The financial services hub adheres to mainland China's strict "zero-Covid" policy under which even the slightest sign of the virus is stamped out with contact tracing, targeted lockdowns and long quarantines. More than 2,000 hamsters have been culled after some imported from the Netherlands by a local pet shop were found to be Covid-positive, raising fears of animal-to-human transmission. The risk of transmission from animals "remains low", the World Health Organization has said, but is a possibility.
PUBLIC HEALTH・1 DAY AGO
WCCO News Talk 830

After a tough month in the Twin Cities dealing with the surge in COVID-19 cases due to the omicron variant, Dr. Michael Osterholm shared that the region is over the peak.
PUBLIC HEALTH・6 HOURS AGO
foodcontessa.com

China Warns That the United States Will Pay a “Unbearable Price” for Its Actions on Taiwan.

Foreign Minister Wang Yi warned on Thursday that the United States would “pay an unbearable price” for its actions toward Taiwan’s self-rule. Human rights, trade, and technological competition have become major flashpoints in China-US relations in the last few years. Chinese officials have stated that they will...
FOREIGN POLICY・25 DAYS AGO
blackchronicle.com

Although the New Year is sure to come with positive resolutions and changes for the better, one thing you can almost guarantee will remain a constant is the act of entitled white woman living up to their viral moniker of being a “Karen.”. In the latest episode of “When...
PUBLIC SAFETY・17 DAYS AGO
Daily Mail

An Indian farmer was left astonished yesterday after one of his goats gave birth to a kid with the 'face of a human' which neighbours described as a 'warning from God'. The goat belonging to farmer Shakar Das, 46, gave birth to several offspring in Gangapur village in the northeastern Indian state of Assam.
INDIA・26 DAYS AGO
Interesting Engineering

Bill Gates, the visionary who warned us about a pandemic five years before it actually happened, has said that future pandemics could turn out far worse than COVID-19, The Independent reported. Gates reportedly said this as his charitable foundation donated $150 million to the Coalition for Epidemic Preparedness Innovation (CEPI) to fight the COVID-19 vaccine and prevent future pandemics.
PUBLIC HEALTH・12 HOURS AGO
The Independent

As airlines across Europe fly planes without passengers purely to hang on to take-off and landing slots, a UK parliamentary petition demanding an end to “ghost flights” has attracted more than 3,000 signatures.Flying planes empty has long been used by airlines to preserve what is often their most valuable asset: permission to land at and take off from, high-demand airports such as London Heathrow.In the industry, the practice is known as “keeping slots warm” – flying enough to adhere to the 80:20 rule that requires an airline to use a slot 80 per cent of the time. Any less, and the...
AEROSPACE & DEFENSE・1 DAY AGO