Listen to The Morning Hustle weekday mornings from 6-10AM EST!

Taraji P. Henson Shares The First Look At Her Character Ahead Of ‘Annie Live!’ 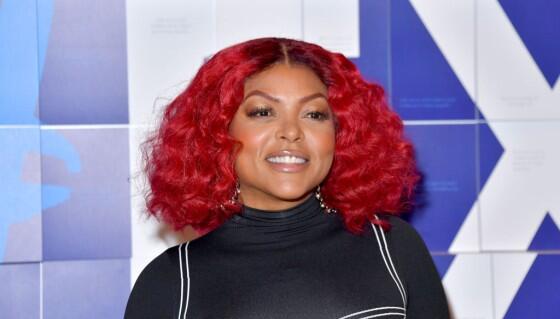 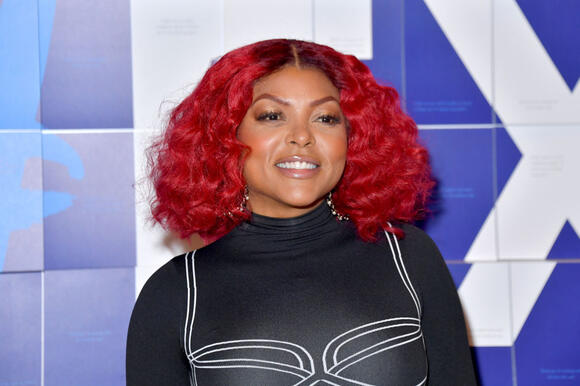 Taraji P. Henson is getting ready to take the stage as Miss Hannigan in NBC’s holiday musical, Annie Live! and she’s just shared the first look of herself all dressed up and in character ahead of the live event.

Taking to Instagram, the actress posted an adorable Reel of herself snapping her fingers and transforming into her character while getting her followers excited about tonight. “T hat’s better See you TONIGHT at 8/7c for #AnnieLive on @nbc !!” she captioned the quick video.

She also shared a side-by-side shot as she paid tribute to the Miss Hannigan Taraji grew up on, Carol Burnett. Here, the entertainer donned a nude slip dress and a green and orange printed robe that featured Fushia feathers on the sleeves. Check it out below.

And as the countdown for the live musical continued, Taraji shared a few more BTS videos of herself on stage while getting in full character for her big performance.

And asked fans, “who’s watching?” in another video.

Annie Live! is a live TV production of the classic Tony-winning show, which first premiered on Broadway in 1977.  The musical tells the story of an orphan named Annie (played by 12-year-old newcomer, Celina Smith in this adaptation) who wins over grumpy billionaire Oliver Warbucks while staying at his mansion for Christmas.

The Empire actress will play Miss Hannigan, the head of Annie’s orphanage who loves her job but hates children, especially Annie. When discussing the role, Henson told USA Today , “This is a role I certainly didn’t think I would ever play. I haven’t seen a Black woman portray Miss Hannigan yet … and that’s the beautiful thing about these plays that have been around for a long time: just getting different people to play the same characters with their interpretation.”

Although we’re used to seeing the actress kill it on the big and small scenes, theatre comes naturally for her as it’s where she got her start. While attending Howard University, Henson studied musical theater as a drama student, and aside from singing on “Saturday Night Live” and Three 6 Mafia’s Oscar-winning “It’s Hard Out Here for a Pimp,” many fans haven’t gotten a chance to see Henson’s full range of talent. “I don’t think a lot of my fans know this about me,” she explained. “This is really a chance for people to see me perform in this light.”

Yung Miami And Taraji P. Henson Wore The Same Dress To The Moschino Show For NYFW

Taraji P Henson Debuts A New Cut And Color For The Gram And We’re Obsessed!

Taraji P. Henson Sings a Random Lyrics Version of “I Will Survive” by Gloria Gaynor | That’s My Jam

Taraji P. Henson rocks Nonsense Karaoke singing “I Will Survive” by Gloria Gaynor using random lyrics!. Watch That’s My Jam, Mondays 9/8c on NBC. Hosted by Jimmy Fallon, “That’s My Jam” is an hour long music and comedy variety game show that draws inspiration from the most popular “Tonight Show” games. Each episode features two teams of two celebrities competing for a charity of their choice in a series of music, dance, and trivia-based games and musical performances. Signature games to be played include Launch the Mic, Air Guitar, Don’t Drop the Beat, Perfect Mash-Up, Wheel of Impossible Karaoke, Slay It, Don’t Spray It and many more.
THEATER & DANCE・11 DAYS AGO
uticaphoenix.net

Taraji P. Henson And Normani Hilariously React To Getting Sprayed

During an episode of NBC’s The Tonight Show: That’s My Jam, R&B singer Normani and Oscar nominee Taraji P. Henson lost in a lyrical contest that challenged their memory skills, Billboard reports. The pair competed in a star-studded lineup round called “Slay It Don’t Spray It,” where contestants...
CELEBRITIES・14 DAYS AGO
kizn.com

Carly Pearce Shares a Behind the Scenes Look at Her Tour

After being off the road during quarantine in 2020, Carly Pearce opened for Lady A on the What A Song Can Do tour this past summer. Then in the Fall, Carly launched her own headlining run of shows for The 29 tour where she played songs from her latest album.
CELEBRITIES・14 DAYS AGO
E! News

Naomi Osaka is serving up nothing but love for her boyfriend Cordae. While the couple has preferred to keep their relationship private over the last three years, the Olympic tennis player broke the mold on Friday, Jan. 14, by congratulating her boyfriend on the release of his second album, titled From a Birds Eye View, in an extra adorable tribute to him on Instagram.
TENNIS・11 DAYS AGO

Beloved comedian Louie Anderson died on Friday at the age of 68 after he was hospitalized in Las Vegas last week. His publicist Glenn Schwartz confirmed to The Washington Post that the Emmy-winner's cause of death was complications with his non-Hodgkin's lymphoma. He had been privately battling cancer for a decade.
CELEBRITIES・2 DAYS AGO
The Hollywood Reporter

Queen Latifah Responds to Chris Noth’s Firing From ‘The Equalizer’

Queen Latifah is weighing in after The Equalizer co-star Chris Noth exited the show amid assault allegations against him. During a recent interview with People (the TV Show!), Latifah called it “still surreal” that Noth, formerly a series regular, will no longer appear on the CBS procedural. The network announced its decision to drop him on Dec. 20 following The Hollywood Reporter reporting earlier in the month that two women had accused the Sex and the City alum of sexual assault. “It is such a dicey, delicate situation that requires a great deal of respect,” Latifah said in the new interview. “That’s...
CELEBRITIES・1 DAY AGO
KTLA

Actress Tamara Taylor shares what to expect from her character in Season 2 of ‘Law & Order: Organized Crime’

First look at Sofia Vergara in her new Netflix series

Janet Jackson is unfiltered in her new four-hour Lifetime and A&E documentary, in which no subject is off limits as she discusses her life, her career and her late brother Michael Jackson. “It's just something that needs to be done,” she said of the two-part docuseries, "Janet Jackson." In...
CELEBRITIES・1 DAY AGO
Outsider.com

While the roles have been small, there have been some pretty epic guest appearances on Taylor Sheridan’s “1883.” This includes Billy Bob Thornton as well as Tom Hanks. And perhaps Hanks’ wife Rita Wilson visited him on set because the actress recently announced she would be joining Faith Hill in some scenes as the new episodes unfold.
CELEBRITIES・14 DAYS AGO
Life and Style Weekly

Sending a message? Fans think Kim Kardashian shaded estranged husband Kanye West with her latest gym outfit by wearing Nike Air Max 95s instead of her usual Yeezy sneakers. The Keeping Up With the Kardashians alum, 41, shared a slew of photos via Instagram on January 22 showing off her adorable pink workout attire. While she was seemingly flaunting her matching set from Bo + Tee, which retails for less than $100, fans couldn’t help but notice she put her Nike Air Max shoes on full display.
CELEBRITIES・2 DAYS AGO
HollywoodLife

Relationship tips from Lori. The model daughter of Steve Harvey explained why it’s essential to be friends before anything else. Lori Harvey, 25, and boyfriend Michael B. Jordan, 34, have been head-over-heels for one another since they went public in Jan. 2021. And while love in the limelight can be harsh sometimes, the model daughter of Steve Harvey, 65, shared her tips for relationship success with POPSUGAR for their Jan/Feb cover story, published Jan. 25. “Always communicate. Overcommunicate, even, so you are always on the same page,” Lori said. “Also, be friends first. You know how sometimes you fight with your siblings and, of course, you love them, but you’re like, ‘I don’t even like you right now’? It’s important to always be friends whether you like the person.”
RELATIONSHIPS・1 DAY AGO

The money challenge has taken social media by storm over the last several days. A sizable roster of rappers and celebrities have participated in the challenge in a plethora of ways — whether they’re using actual cash to spell out a phrase or making a point by using toilet paper to spell out things such as “IRS Watching.”
CELEBRITIES・23 HOURS AGO
BET

Vivica A. Fox Shares An Update From Regina King Following The Death Of Her Son

Vivica A. Fox is speaking on behalf of her longtime “friend and sister” Regina King following the death of her son Ian Alexander Jr., King’s only son died by suicide on Wednesday (Jan. 19) days after his 26th birthday. During the segment of her show Cocktails with...
CELEBRITIES・1 DAY AGO
GlobalGrind

BET+ debuts The Real Husbands of Hollywood More Kevin, More Problems trailer today (Jan. 24). The six-part limited series is set to release on the platform next month. Watch the trailer inside.
TV SERIES・1 DAY AGO
Deadline

EXCLUSIVE: Ivory Aquino (When They See Us, Tales of the City) has joined the cast of Batgirl, the upcoming superhero film that Bad Boys for Life‘s Adil El Arbi and Bilall Fallah are directing for HBO Max. Aquino will star alongside previously announced cast members including Leslie Grace, J.K. Simmons, Brendan Fraser, Michael Keaton and Jacob Scipio. Batgirl is based on the DC comics created by writer Gail Simone and artist Ardian Syaf. While specifics with regard to the film’s plot are being kept under wraps, it will center on Gotham City police commissioner Jim Gordon’s (Simmons) daughter, Barbara (Grace). Aquino will play Barbara’s best friend,...
MOVIES・1 DAY AGO
bravotv.com

Porsha Williams knows the key to surviving any long flight is bringing along plenty of snacks. The Real Housewives of Atlanta: Porsha's Family Matters cast member recently took to Instagram to show off her “flight survival kit,” which included a good book and a variety of yummy treats.
CELEBRITIES・12 DAYS AGO
The Independent

YouTuber and crafter Melanie Ham, who was well-known for the stories about her art and personal life she shared on social media, has died at the age of 36.According to posts shared to her social media accounts, which were published by her husband Robert Ham, Ham passed away from cancer on 12 January.“It is with a heavy heart and deep sadness I share the news of the passing of my sweet, amazing, beautiful wife Melanie,” the caption of the Instagram post reads. “If you’ve been following our journey I’m sure you were, like us, hopeful she could defeat this...
CELEBRITIES・4 HOURS AGO
Audacy

In an interview, actor Zach Galifianakis offers a loving tribute to his ‘Baskets’ co-star, Louie Anderson, who recently passed away at the age of 68: ‘I will miss him tremendously’.
CELEBRITIES・1 DAY AGO
Outsider.com

Bull actor Michael Weatherly posted a humorous behind-the-scenes look at filming on location for an upcoming episode. “Shooting at a prison can have certain side effects…” tweeted Weatherly. In the accompanying video, the NCIS alum is riding out of a prison complex in a car. He then said: “I’m making a run for it.”
TV & VIDEOS・2 DAYS AGO

Listen to The Morning Hustle weekday mornings from 6-10AM EST!