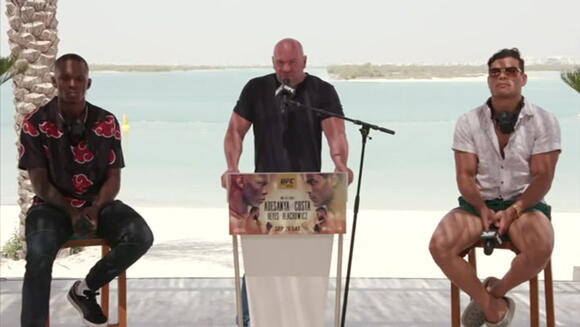 UFC president Dana White has compared Conor McGregor to fictional boxer Rocky Balboa as the Irishman trains ahead of an expected 2022 comeback.

McGregor last competed in July, breaking his leg at the end of the first round of his trilogy bout with Dustin Poirier, who knocked out the former dual-weight champion in January.

McGregor revealed last month that he is due to be healthy enough to return to sparring in April , with his next UFC bout likely to take place next summer at the earliest.

UFC president White said of McGregor on The Jim Rome Podcast this week: “He’s chomping at the bit to get back in there and compete again.

“It’s going to be a while before he can put some torque on that leg. April, for him to start training again in April is probably about right.”

White went on to compare McGregor to Rocky Balboa, the fictional protagonist of the Rocky film series.

“[McGregor] obviously still has the desire to compete,” White said. “You don’t ever hear Conor going: ‘You know what, man? I just don’t have the desire for this anymore.’ You know what I mean?

“He’s obviously very rich, and he’s training like Rocky in Rocky III , but he still has the desire to compete and the desire to fight, and we’ll see what happens.”

McGregor has competed in the Octagon four times since 2016, losing on three of those occasions – including his two defeats by Poirier this year.

A number of potential opponents have been linked with the 33-year-old ahead of his expected comeback next year, including former foes Nate Diaz and Max Holloway, as well as new UFC fan favourite Michael Chandler .

Before the pub attacks and alleged DJ abuse, Conor McGregor was in hot water for….a photograph?. In January 2016, then-UFC featherweight champion Conor McGregor was under investigation in Ireland for a photo he posted on Instagram that appeared to depict him holding an automatic rifle. The Notorious then returned to Dublin and had the Gardai looking into whether the weapon was real or a replica.
PUBLIC SAFETY・12 DAYS AGO
The Independent

A Dublin pub owned by Conor McGregor was targeted on Wednesday night, according to police, who confirmed they are investigating an “incident of attempted criminal damage”. Police attended the scene at the Black Forge Inn on the same night the UFC star reportedly hosted a taste-testing evening in the Irish capital. Social media posts from the former UFC champion confirmed that he had been at the venue on Wednesday. Police confirmed that no damage had been done to the pub as they called for witnesses. A spokesperson said: “Gardai are investigating an incident of attempted criminal damage at a...
PUBLIC SAFETY・7 DAYS AGO
MMAmania.com

UFC President Dana White raised a few eyebrows earlier this week when he told The Dave Portnoy Show that Anderson Silva, Jon Jones, Georges St-Pierre, and Kamaru Usman were among the greatest fighters to ever compete in MMA. “You’d have to go Anderson Silva, GSP, Jones,” White said. “Usman is...
UFC・1 DAY AGO
CBS Sports

UFC president Dana White would rather Jones enjoy the splendid violence of Francis Ngannou vs. Ciryl Gane from the comfort of his home. Jones, the now former light heavyweight champion, has teased his move up to heavyweight for nearly two years with many expecting him to take on the winner of the main event of UFC 270 next.
UFC・19 HOURS AGO

Many UFC fans have likely been typing Nate Diaz next fight recently in their MMA Google searches, as they wonder
UFC・1 DAY AGO
bjpenndotcom

Henry Cejudo has made it very apparent that he wants to get back in the cage and has pointedly told anyone who would listen that it’s UFC President Dana White, who’s standing in his way. In an interview with Barstool Sports, Dana explained what Cejudo must do to...
UFC・1 DAY AGO
bjpenndotcom

Kay Hansen was supposed to fight on January 15, but after hearing UFC 270 was the week after in Anaheim, she made it clear she wanted to be on that card. Hansen is from Anaheim and of course wanted to be a part of the card but her managers initial request to have the bout moved didn’t happen. However, she decided to take matters into her own hands and messaged Dana White herself to move the fight, and just a day later she got her wish.
UFC・13 HOURS AGO
MMAmania.com

Was That Conor McGregor? There’s No Way It Could Be!

Many UFC and MMA fans have been left scratching their heads over the last few months, as well-known fighter Conor McGregor has undergone some drastic bulking up over a very short period of time. The former lightweight and featherweight champion fighter has been hulking up since December of last year. Five months before we started to see this incredible size increase, McGregor suffered a painful leg break during his fight against Dustin Poirier. It wasn’t exactly the ending that McGregor or his fans signed up for and McGregor, trash-talking as usual, promised he would make Poirier pay for the injury in the first half of this year. At the time of that match, McGregor weighed in at just over eleven stone and has gained an almost unbelievable 34lbs in six months. Poirier, naturally, has spoken out in the media about this incredible weight gain and said that McGregor needs to slow down on the Black Forge (non-FDA approved supplements). McGregor’s appearance is indeed a surprise, from formerly sleek and slim in the face to incredibly buff and round in the cheeks. It’s hard to figure out what’s really going on here, but we have a few guesses.
UFC・15 HOURS AGO
Outsider.com

Dana White Says Kid Rock Played UFC Holiday Party Like It Was a ‘Stadium of 20,000 People’

We all know that Kid Rock likes to party. Heck, he IS the party. And he sure played like it at the 2021 UFC Holiday Party. He’s played on countless stages and he goes all out every single time. The UFC Holiday Party has hosted many other music legends in the past, including The Red Hot Chili Peppers, Snoop Dogg, Joan Jett and the Blackhearts, and Gary Clark Jr.
COMBAT SPORTS・1 DAY AGO
bjpenndotcom

Dana White sends a stern message to Francis Ngannou ahead of UFC 270, tells him to focus on Ciryl Gane not boxing

Dana White has sent a message to Francis Ngannou ahead of UFC 270. In the main event of the first pay-per-view card in 2022, Ngannou is set to defend his heavyweight title for the first time against the interim champ, Ciryl Gane. It’s a fascinating fight due to them being ex-training partners, but a big storyline for the scrap is the fact this is Ngannou’s last fight on his contract.
UFC・11 HOURS AGO
ClutchPoints

UFC President Dana White has his hands full when it comes to the future of the heavyweight division. Francis Ngannou wants a new contract with very specific terms and Jon Jones has been teasing a move to the division for almost a decade. All signs point to Jon Jones moving...
UFC・10 HOURS AGO

Dana White and Henry Cejudo have been going back and forth lately as the former UFC champion has been hoping to come back for a third title in another division. The UFC President recently shut that down. The UFC President was recently on a Barstool Sports podcast where he talked...
UFC・1 DAY AGO
Inland Valley Daily Bulletin

More than four years ago, the UFC rolled into Anaheim with a triple title-fight UFC 214 card and rewrote the Honda Center record books with a sold-out attendance of 16,610 and a live gate of $2,448,870. With a prolonged paucity in Southern California due to the COVID-19 pandemic, the MMA...
UFC・1 DAY AGO
Financial World

The greatness of Conor McGregor: Has McGregor ever been knocked out?

Conor McGregor is one of the most dominant fighters in UFC history but even he has been twice knocked out. The great Floyd Mayweather and Dustin Poirier are the only fighters who have managed to knock out McGregor. In 2017 August, McGregor took on Mayweather in "The Money Fight." It...
UFC・2 HOURS AGO
The US Sun

CONOR MCGREGOR hasn't fought in the UFC since losing his trilogy bout with Dustin Poirier in July last year, with no plans in place for his next bout. UFC chief Dana White has teased fans though, with the possibility of an epic trilogy clash against McGregor's long-time rival Nate Diaz.
UFC・17 HOURS AGO
MMAmania.com

Francis Ngannou has been very vocal about his desire to ink a new contract with Ultimate Fighting Championship (UFC) that will not only give him a huge bump in pay, but also the chance to branch out and box. Speaking of “The Sweet Science,” Ngannou has also been open about his goal to challenge current WBC and The Ring Heavyweight champion, Tyson Fury.
UFC・12 HOURS AGO
SPORTbible

Dana White Reveals His Top Three UFC Fighters Of All-Time, Names Fighter Who's 'Getting Up There'

​Dana White has revealed his top three MMA fighters of all-time while naming the current UFC champion who's 'getting up there' following his domination in the Octagon. White was asked about the MMA GOAT debate ahead of the blockbuster UFC heavyweight championship clash between Francis Ngannou and Ciryl Gane. He...
UFC・1 DAY AGO
The Independent

A potential fight between Mike Tyson and Jake Paul in Las Vegas is unlikely to be sanctioned.Former UFC champion Michael Bisping believes that strict rules set by the Nevada State Athletic Commission mean that an exhibition encounter will not be licensed. Paul and Tyson are said to be in discussions over a bout, with organisers hoping a clash between the Youtube personality and former undisputed heavyweight champion could generate £36million if held in the American city.Yet Bisping, a former UFC middleweight champion, does not think it would be approved even as reports suggest a verbal agreement between the pair may...
COMBAT SPORTS・1 DAY AGO
Robb Report

The robe Muhammad Ali wore before one of the most important fights of his career could soon be yours. The garment the Greatest wore to the final weigh-in and while walking out for his 1965 fight with Sonny Liston is currently up for sale on Goldin Auctions. The robe isn’t just noteworthy because it was worn before the boxer’s second heavyweight title bout, but also because it’s the first that bore the name he’d go by for the final 52 years of his life. Ali wore the robe, which is made of white terry cloth and has “Muhammad Ali” stitched in red...
COMBAT SPORTS・2 DAYS AGO