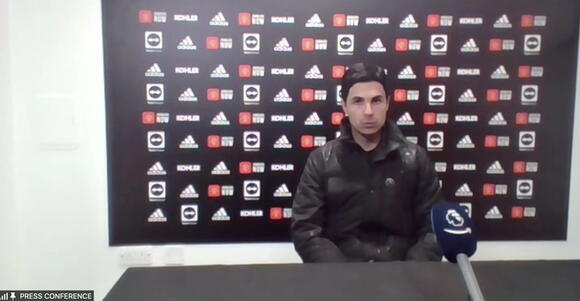 Thomas Partey has no doubt Arsenal remain on an upward trajectory despite Thursday’s defeat at Manchester United.

The Gunners were edged out 3-2 in a thrilling Premier League clash at Old Trafford, having led early on.

The result cost them the chance to move up to fourth in the table but was only their second loss in 11 games.

Midfielder Partey felt there was enough in the performance to show Arsenal are still moving in the right direction.

The Ghana international told the club’s website, www.arsenal.com: “The team is improving, each and everyone is doing our best.

“I think we’re improving each day and it’s going to be good. If we want to be at the top it’s normal that we have to fight, we have to be under control and try to win the games.

“I think the team came out to win, we did everything we could, we played well, we created a lot of chances and I think that we were unlucky.”

Partey admitted he himself was still striving to find his best after a spell out injured last month.

The 28-year-old said: “For me, I have to keep on doing my best, keep trying, keep improving, try to come back to my best, because the team needs me.”

Arsenal struck in the 13th minute with a bizarre goal from Emile Smith Rowe. The youngster drove into an unguarded net after United goalkeeper David De Gea collided with team-mate Fred.

United equalised before the break through Bruno Fernandes and then went ahead in the 52nd minute with Cristiano Ronaldo’s first goal of the night.

Martin Odegaard brought Arsenal back level but then conceded the penalty which allowed Ronaldo to fire the winner.

Partey said: “They scored two goals and then a penalty. The team tried to improve, go forward and look for a goal, for the equaliser, but in the end it’s football.

“We have to forget about this game, we have to think of our next game. We have to do better and also to win.”

Victor Lindelof will not be involved for Manchester United this weekend as the defender supports his family following a “very traumatic” break-in at their house as he played against Brentford The 27-year-old played the full 90 minutes as Ralf Rangnick’s Red Devils secured a 3-1 Premier League win at the Brentford Community Stadium on Wednesday evening.Lindelof’s house in the north west was targeted while the defender was in London forcing his wife to lock herself and their two children in a room for safety during the burglary.“During Victor’s game this Wednesday night we had a break-in at our house...
PREMIER LEAGUE・2 DAYS AGO
The Guardian

A drone interrupted play at Brentford, we had a late, late winner at Old Trafford and Newcastle dug in for victory on an eventful afternoon
PREMIER LEAGUE・1 DAY AGO
The Independent

It might still be called the Theatre of Dreams by locals and broadcasters alike, keen to talk up another big game and yet another turning point in Manchester United’s meandering, confusing season, but there’s an uncomfortable home truth growing larger by the month.A literal home truth, in this case: Old Trafford is far from a fortress these days. It’s not a place teams tend to fear. More regularly of late, it has been a sounding board of discontent, a map of malaise and a representation of greater issues within the club.United are fast-approaching a fourth consecutive season in which they...
PREMIER LEAGUE・2 DAYS AGO

Marcus Rashford eased the gloom around Old Trafford with a stoppage-time winner as Manchester United snatched a dramatic 1-0 Premier League win over West Ham.Ralf Rangnick’s men looked set for more frustration in a poor quality encounter before Rashford latched onto a neat pass from fellow substitute Edinson Cavani to fire home with virtually the last kick of the game.Cristiano Ronaldo had gone close in the opening period and was denied a penalty appeal as David Moyes’ Hammers began to grow in confidence.Fred had the first shot on target for the hosts in the 49th minute which was well saved...
PREMIER LEAGUE・1 DAY AGO
The Independent

Sports stars and clubs across the world continue to provide an insight into their lives on social media.Here, the PA news agency looks at some of the best examples from January 23.FootballManchester United’s players celebrated Saturday’s last-gasp victory over West Ham.The United Way 🔴💪 pic.twitter.com/TiMjw39gpc— Harry Maguire (@HarryMaguire93) January 23, 2022What a feeling 😍 https://t.co/r2Y40TOp35— David de Gea (@D_DeGea) January 23, 2022Liverpool were happy to leave Crystal Palace with three points.Boom!!! 3 points! It’s a tough place to go and it showed. Time to recharge and get back to it after the break 😄 pic.twitter.com/UE3KQIyogO— Virgil van Dijk (@VirgilvDijk) January...
PREMIER LEAGUE・15 HOURS AGO
fourfourtwo.com

Manchester United kept up the pressure on Women’s Super League leaders Arsenal with an impressive 3-0 win against Tottenham. Vilde Boe Risa volleyed the hosts into the lead after 38 minutes before Hayley Ladd netted a second ahead of the interval.
SOCCER・16 HOURS AGO
newschain

Thomas Partey and Granit Xhaka suspended for Arsenal against Burnley

Arsenal will be without two key midfielders as they welcome Burnley to the Emirates Stadium on Sunday afternoon. Both Granit Xhaka and Thomas Partey are suspended for the game with the pair sent off in either leg of the Carabao Cup semi-final defeat at the hands of Liverpool. Pierre-Emerick Aubameyang’s...
PREMIER LEAGUE・2 DAYS AGO

Super-sub Marcus Rashford struck a dramatic stoppage-time winner as Manchester United broke West Ham hearts and lifted the roof off Old Trafford.In the Carabao Cup earlier in the season David Moyes led the Hammers to their first win at the Red Devils since 2007 and he looked set to leave with a potentially vital point in the race for Champions League qualification.But United dug deep and secured victory with virtually the last kick of the game as Edinson Cavani crossed for fellow substitute Rashford to score in front of a rocking Stretford End to seal a 1-0 win.It was a...
PREMIER LEAGUE・1 DAY AGO
The Independent

A key clash in the battle for European places will be on show at Old Trafford on Saturday afternoon, where Manchester United host West Ham United.David Moyes’ side have been extremely impressive for the majority of this term and remain in fourth in the Premier League table, where a huge battle is developing between at least four sides.These teams met twice in short order earlier in the season, United winning in the league in dramatic fashion before the Hammers knocked them out of the Carabao Cup, but there’s arguably even more at stake this time around - in part due...
PREMIER LEAGUE・1 DAY AGO
San Diego Union-Tribune

David De Gea hopes Manchester United’s “unbelievable” stoppage-time winner against top-four rivals West Ham will be the moment that kickstarts their campaign.Long since out of the Premier League title race, the FA Cup and Champions League remain the Red Devils’ only route to silverware having been knocked out of the Carabao Cup by Saturday’s opponents.That win in September was West Ham’s first at Old Trafford since 2007 and David Moyes was unable to mastermind another memorable triumph at his former club on Saturday afternoon.Ralf Rangnick’s side looked comfortable for the most part but it took a last-gasp strike from substitute...
PREMIER LEAGUE・21 HOURS AGO

Cristiano Ronaldo is a doubt for Manchester United’s match against West Ham due to a neck complaint.Having missed two matches with a hip flexor issue, the 36-year-old frontman returned in Wednesday’s 3-1 Premier League win at Brentford.Ronaldo made headlines with his reaction to being taken off in the second half by interim boss Ralf Rangnick who has revealed the forward might be absent entirely on Saturday.“Cristiano is a question mark because he has a problem with his neck,” he told MUTV.“He received treatment yesterday for two or three hours and we will have to wait to see how he...
PREMIER LEAGUE・2 DAYS AGO
The Independent

Ralf Rangnick praised Harry Maguire for producing a performance befitting the captain’s armband on his return to the Manchester United starting line-up.The world’s most expensive defender has been under close scrutiny this season, both for his displays in the heart of defence and leadership of the team.Maguire missed the first two matches of 2022 with a chest injury and was named on the bench against Aston Villa and Brentford as Rangnick favoured Victor Lindelof alongside Raphael Varane.But the United skipper was restored to the starting line-up against West Ham in the absence of Lindelof, who was supporting his family after...
PREMIER LEAGUE・12 HOURS AGO
The Independent

With eight minutes plus stoppage time remaining and Manchester United still searching for a winner against West Ham, some jeers could be heard when Mason Greenwood’s number flashed up. It was not the first time that Old Trafford has registered its displeasure with Greenwood’s removal recently. The same happened in the defeat to Wolverhampton Wanderers. This time was different, though. It was not so much about the player coming off as the one coming on.Anthony Martial had not played a single minute under Ralf Rangnick at that point. A week earlier, he had been absent from the match day squad...
PREMIER LEAGUE・3 HOURS AGO
San Diego Union-Tribune

On a frustrating evening for the pair of big-name strikers, they once again struggled to show why they were so sought-after last summer
PREMIER LEAGUE・13 HOURS AGO
San Diego Union-Tribune