Deontay Wilder insists he ‘got something out of’ Tyson Fury defeat 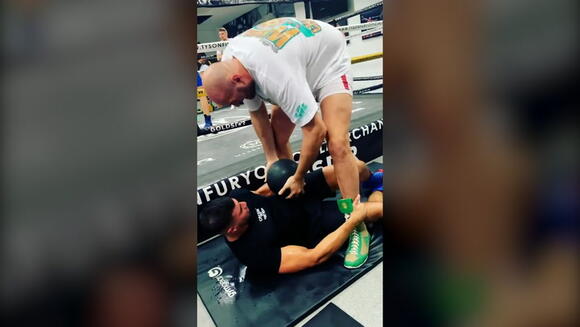 Deontay Wilder has insisted that he “got something out of” his most recent loss to Tyson Fury .

Fury stopped Wilder in the 11th round in October to conclude their trilogy, having also finished the American in February 2020 after the rivals’ initial draw in December 2018.

Following the pair’s second fight, Wilder listed a number of reasons as to why he lost – few relating to Fury’s performance – but he has seemingly learned lessons from the most recent bout.

“We didn’t get what we wanted, but we still got something out of it.

“I think we got something even bigger out of it besides just a victory. I’m grateful for that, I’m blessed all the way around.

“With that being said, it’s no complaints at all; we just move forward. You come up to a certain point... as humans we feel we come up to a dead-end or we fail, we think: ‘This is it for us.

“But when you’re travelling along your journey, nothing should be: ‘This is it.’ For me, this is not it; this is just the beginning. The best is yet to come from me.”

Wilder, 36, further expressed an intention to keep fighting, saying: “I’m still in love with the sport of boxing.

“Although I have accomplished a lot of things – more than I could’ve imagined – I do still have goals in the sport, that’s why I still have love for it.

“I’m looking to accomplish the goals that I still have left.

“I broke my hand, so I’m in a healing process right now. Once this is over, I’ll resume training for sure.

Wilder reigned as WBC heavyweight champion between 2015 and 2018, losing the belt in his second meeting with Fury.

Deontay Wilder is expected to get back in action this coming May and has many options open to him on the Pay Per View format. We know so far that Wilder thought long and hard about his career achievements but decided not to walk away after losing to Tyson Fury again in October.
COMBAT SPORTS・9 HOURS AGO
The Independent

John Cena has revealed he had three beers before taking on The Undertaker in a surprise match at WrestleMania 34.Cena took on the iconic WWE wrestler at the event in 2018 before both stars retired from the sport. Cena took his bow in 2021 and The Undertaker, real name Mark Calaway, retired in 2020. Cena has now said he had three beers ahead of the clash.“Everybody is chilled and watched the show,” he told Pat McAfee on his podcast Then I made great friends with some people who traveled from Australia, people who traveled from across the US, buying each...
WWE・2 DAYS AGO
411mania.com

Booker T On Jade Cargill Being Something Wrestling Has ‘Never Seen Before,’ Comparisons To Goldberg

Dana White reacts after Doctors attempt to silence “lies” from Joe Rogan: “It’s disgusting. Yeah, it’s one of the craziest things I’ve ever witnessed in my life”

Dana White has reacted after hundreds of medical experts demanded Spotify put an end to “lies” being shared on the Joe Rogan Experience. In an open letter to Spotify earlier this week, 270 doctors, scientists and other medical professionals voiced their concerns over misinformation and ‘baseless conspiracy theories’ surrounding the COVID-19 Pandemic which have been put forth on Joe Rogan’s podcast.
COMBAT SPORTS・1 DAY AGO

John McEnroe has weighed in on the ongoing Novak Djokovic situation. The situation began when Djokovic, despite being unvaccinated from COVID-19, traveled to Australia for the Australian Open. He had informed the public that he received a medical exemption to go without vaccination. Australian Immigration Minister Alex Hawke denied Djokovic’s...
TENNIS・10 HOURS AGO
The Independent

In the main event of UFC 270 this Saturday, Francis Ngannou makes the first defence of his heavyweight title as he comes up against interim champion and former teammate Ciryl Gane.Ngannou is 16-3 in professional mixed martial arts and 11-2 in the UFC, with all of his wins in the promotion coming via stoppage – 10 by knockout/TKO and one by submission. In his last outing, the French-Cameroonian avenged a 2018 decision loss to Stipe Miocic by knocking out the American to take his heavyweight title in March.Meanwhile, Gane (10-0) is more known for his speed and technicality than...
UFC・18 HOURS AGO
fightsports.tv

UFC President Dana White isn’t surprised by Francis Ngannou’s callout of Tyson Fury. At the UFC Vegas 46 post-fight press conference on Saturday, White was asked on the update of Ngannou’s almost-finished contract with the promotion and his thoughts on Ngannou and Fury – the WBC boxing heavyweight champion – meeting one another for a fight.
UFC・6 HOURS AGO
The Independent

The UFC’s heavyweight titles will be unified in the main event of UFC 270 this weekend, as Francis Ngannou defends against interim champion and former teammate Ciryl Gane.Ngannou (16-3) is 11-2 in the UFC, with 10 of his wins in the promotion coming via knockout/TKO and the other by way of submission. Most of the French Cameroonian’s KOs come very early, and in his last bout he knocked out Stipe Miocic in the second round to take the American’s heavyweight title.That was in March, with Ngannou avenging a decision defeat by Miocic in the process, while Gane (10-0) fought...
UFC・18 HOURS AGO

Francis Ngannou defends his heavyweight title for the first time this weekend, when he take on interim champion and former teammate Ciryl Gane in the main event of UFC 270.Ngannou (16-3), widely considered to be the greatest power-puncher in UFC history, has achieved 10 of his 11 wins in the promotion via knockout or TKO, with the other coming via submission.In his most recent bout, the French-Cameroonian took the heavyweight belt from Stipe Miocic in March, knocking out the American to avenge a humbling decision defeat from 2018. Gane (10-0), meanwhile, fought and won three times in 2021, the...
UFC・18 HOURS AGO
Sportsnaut

Calvin Kattar earned a unanimous decision over Giga Chikadze in their featherweight bout at UFC Fight Night on Saturday at
UFC・1 DAY AGO
MMAmania.com

Former Ultimate Fighting Championship (UFC) Bantamweight roost-ruler, Henry Cejudo, who also held gold at 125 pounds, was back in the headlines last week after petitioning promotion president, Dana White, for an opportunity to win yet another title, this time in the Featherweight division. White shut him down without remorse. “You...
UFC・10 HOURS AGO
The Independent

Next UFC Fight Night: Event start time, card and how to watch

The UFC is mixed martial arts’ flagship promotion, home to some of the best fighters in the world.It stages events almost every weekend of the year, with pay-per-view cards taking place once a month on average – marking the company’s biggest shows.Here is a look at the UFC’s next event, including all the fights set to take place, what time they start and how to watch the card.Saturday 22 January – UFC 270 – Honda Center, AnaheimWhat time does it start?The prelims are scheduled to begin at 11pm GMT (3pm PT, 5pm CT, 6pm ET), with the prelims following...
COMBAT SPORTS・1 DAY AGO

Tennis players must learn to move on quickly from defeats but, for Liam Broady qualifying for the Australian Open put right a wrong that has rankled for seven years.The 28-year-old was clearly emotional after coming from a set and 5-2 down to defeat in-form Russian Roman Safiullin on Friday and reach the main draw in Melbourne for the first time.Broady lay down on the court soaking it all in, and prominent in his mind was what happened on the same courts in 2015 when his first experience of an overseas grand slam as a senior pro turned sour.Broady, then...
TENNIS・1 DAY AGO
411mania.com

Asuka hasn’t been seen on WWE TV since Money in the Bank, and a photo posted last August showed that her arm was in a sling. She also noted she had dental work done after a kick from Shayna Baszler knocked her teeth out. Neither she nor WWE ever confirmed any sort of injury, but she may be healed and on her way back.
WWE・12 HOURS AGO