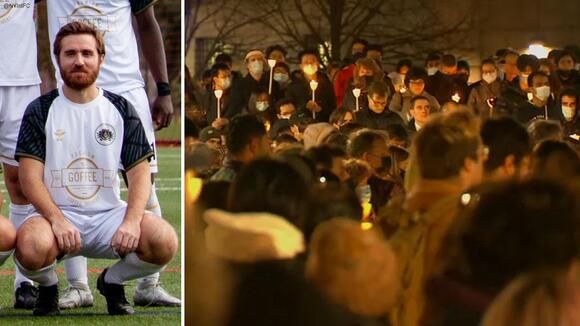 Two men were randomly stabbed, one fatally, apparently by the same knife-wielding suspect wandering the Morningside Heights streets surrounding Columbia University. A third person was menaced by the suspect in Central Park when police arrived and made the arrest. The first victim, a 30-year-old Columbia University student identified as Davide Giri, was randomly stabbed at 123rd Street and Amsterdam Avenue at 10:54 p.m. Thursday. He was pronounced dead at the hospital. Police say Giri, a graduate student at the School of Engineering and Applied Science, lived in Manhattan. He was also a member of NY International FC, an amateur soccer team playing in the Cosmopolitan Soccer League. He was killed as he walked back to his Morningside Heights apartment after a soccer match. About 15 minutes after Giri was attacked, a 27-year-old Italian tourist was stabbed at 110th Street and Morningside Drive. That victim, who was spending his first day in the city, was stabbed in the torso and taken to St. Luke's Hospital, where he is expected to survive. Minutes later, a 30-year-old man told police he was menaced inside Central Park Officers responded and found the suspect, Vincent Pinkney, 25, at West 104th Street and Central Park West on the Upper West Side. Pinkney was taken into custody with a large kitchen knife. The Washington Heights resident was later charged with murder, attempted murder, assault, attempted assault and criminal possession of a weapon. ALSO READ | Cops explain how new DNA technology led to arrest in 1999 cold case

Detectives believe he is responsible for both stabbings, but the investigation is in its early stages He is a reputed gang member last arrested in 2013 for gang assault. He was released on parole five years later. He has prior arrests for conspiracy, also in 2014, and assault in 2013. Police are also investigating an additional stabbing Thursday morning that happened in the same spot where the tourist was attacked later in the day. The 43-year-old man was on West 110th Street when an attacker grabbed him by the neck from behind and stabbed him in the right side of his neck around 12:30 a.m. The victim's injuries were not life-threatening. The stabbings, on opposite ends of Morningside Park, were certain to rattle the Columbia University community that populates Morningside Heights. "I try to stay in safe places, places I know are well-patrolled and well-manned," one student told Eyewitness News. "If anything does happen, I try to avoid confrontation." The community gathered later Friday night for a vigil in honor of Giri. His fellow soccer players were emotional and they were with him just minutes before the attack. The scenes are not far from where Barnard College freshman Tessa Majors was killed two years ago. Majors was stabbed several times in Morningside Park by three teenagers during a robbery on December 11, 2019. In October of this year, one of those teens received a sentence of 9 years to life in prison after pleading guilty in the case. ALSO READ | 14-year-old juvenile pleads guilty in murder of Barnard College student Tessa Majors

I've said it before, and saying it again....NYC is on its way to becoming another Chicago (city taken over by criminals).

How ironic that these are the types of people who probably subscribe to liberal "woke" policies , and as I've said all along, these very same liberals are being slaughtered because of the very policies that they voted for.

My annual 4th of July visits to NYC are over until the city decides that crime is unacceptable and not racist.

Three teenagers are now facing murder charges in New Jersey for the death of 18-year-old Robert Cuadra, an honor student who was just months away from attending his dream university on a full scholarship.
PATERSON, NJ・8 HOURS AGO

Hundreds of people came to the 32 Precinct on Wednesday night, packing 135th Street in Harlem and standing in the cold, to share the burden for a moment, of a pain that will last a lifetime.
NEW YORK CITY, NY・2 DAYS AGO
ABCNY

Rawleigh Thompson was heading to church on Sunday when a man pushed him from behind onto the subway tracks at the Fulton Street Station, directly in front of an oncoming train.
NEW YORK CITY, NY・11 HOURS AGO

Police say the driver was parked in the Westchester Square section when someone walked up to his vehicle and shot him in the leg.
BRONX, NY・5 HOURS AGO
ABCNY

There was no shortage of profound tributes to fallen NYPD Officer Wilbert Mora Tuesday night, but his greatest legacy may be the lives he's saving after his death.
NEW YORK CITY, NY・2 DAYS AGO

The artist says he wants to use his platform and his talent to help bridge the gap between the NYPD and the community.
NEW YORK CITY, NY・2 DAYS AGO
ABCNY

More than 100 weapons were seized and 11 people arrested following a six-month multi-agency investigation into "ghost guns" and other illegal firearms in Westchester and Putnam counties.
WESTCHESTER COUNTY, NY・1 DAY AGO
ABCNY

NYPD officer Wilbert Mora, who was shot and his partner killed while responding to a domestic call in Harlem, has died from his injuries, NYPD Commissioner Keechant Sewell announced Tuesday.
MANHATTAN, NY・3 DAYS AGO
ABCNY

Submit your COVID questions for medical experts and we will get them answered on Eyewitness News.
NEW YORK CITY, NY・11 HOURS AGO