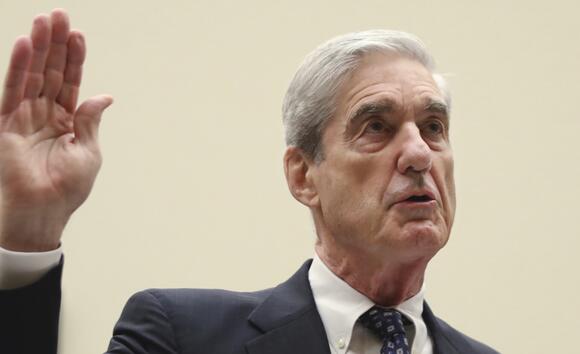 T he so-called "Alternative Mueller Report” mentioned in a book by Andrew Weissmann, a top prosecutor for special counsel Robert Mueller’s Trump-Russia investigation, has been found, according to the Department of Justice.

U.S. Attorney Damian Williams of the Southern District of New York said in a Thursday evening filing in federal court that the Justice Department “has located and begun processing this record and intends to release all non-exempt portions … once processing is complete.”

The Justice Department was responding to a Freedom of Information Act lawsuit filed by the New York Times in July seeking access to a report allegedly compiled by Weissmann, who publicly battled with Mueller after the special counsel's report “did not establish” any conspiracy or coordination between members of former President Donald Trump's 2016 campaign and the Kremlin.

Weissmann claimed in his book Where the Law Ends that the Mueller investigation had faced restrictions that limited the final report that was released.

“Only some of these limitations made it into the final report, as Team M [Manafort] and Team R [Russia] did not have the pen — that is, the final say. To remedy this, at least for posterity, I had all the members of Team M write up an internal report memorializing everything we found, our conclusions, and the limitations on the investigation, and provided it to the other team leaders as well as had it maintained in our files," he wrote in the book published in the fall of 2020.

The New York Times referenced that passage, telling the court this summer that it “sought a copy of the internal report done by Mr. Weissman’s team [the ‘Alternative Mueller Report’] referenced in Weissman’s book” and called it “a document of immense public interest” in claiming that “Weissman’s acknowledgment of the existence of the Alternative Mueller Report suggests that there was important facts or findings omitted from the original version.”

The lawsuit by The New York Times described the Mueller report as a “bombshell.”

The lawsuit argues Mueller “expressly declined to decide whether those contacts could be regarded as collusion.” But Mueller’s report specifically noted “collusion is largely synonymous with conspiracy as that crime is set forth in the general federal conspiracy statute” and said his investigation concluded it “did not establish that members of the Trump Campaign conspired or coordinated with the Russian government in its election interference activities.”

The U.S. attorney told the court on Thursday that the Justice Department “estimates that primary processing” of the report referenced by Weissmann and sought by The New York Times “will be complete by the end of January 2022” and that the department would then “send the record to several other DOJ components for consultation.”

Weissmann’s book misled about how then-Attorney General William Barr characterized the conspiracy section of Mueller’s report, selectively quoting Barr’s letter while himself failing to quote the report’s specific relevant conclusions related to coordination and conspiracy — something Barr did.

DOJ records released last year also show that Weissmann said he accidentally wiped the data from his government-issued phones two separate times. Notes from March 2018 noted he “entered password too many times and wiped his phone,” and notes in September 2018 indicated that he “accidentally wiped cell phone — data lost.”

Sen. Chuck Grassley of Iowa and Sen. Ron Johnson of Wisconsin told Attorney General Merrick Garland this summer that they were “asking the Justice Department for more information and records” about the incident.

DOJ Inspector General Michael Horowitz’s December 2019 report found that the Trump-Russia investigation was filled with serious missteps and concealed exculpatory information from the FISA court, criticizing the Justice Department and the FBI for at least 17 “significant errors and omissions” related to the FISA warrants against Trump campaign associate Carter Page and for the bureau's “central and essential” reliance on British ex-spy Christopher Steele’s discredited dossier. Horowitz said FBI interviews with Steele's main source “raised significant questions about the reliability of the Steele election reporting."

Barr made now-former U.S. Attorney John Durham a special counsel last year to continue investigating the origins and the conduct of the Trump-Russia investigation. Igor Danchenko, who undermined the dossier’s collusion claims, was recently charged with lying to the bureau. He has pleaded not guilty.

Ex-FBI lawyer Kevin Clinesmith admitted in August 2020 that he falsified a document during the bureau’s efforts to renew FISA surveillance authority against Carter Page, a foreign policy adviser to Trump's 2016 campaign. Clinesmith was sentenced to probation in January.

Weissmann, who previously would often weigh in on hot-button issues through his Twitter account, has not sent a tweet since July. He was fairly active on the platform and made frequent appearances on MSNBC to talk about matters relating to Trump in the months prior to him going dark. It was reported in August that Weissmann recently left Jenner & Block, a law firm he rejoined last year , to go "in-house."

Mueller defended his Russia investigation against criticism from Weissmann and others last summer and said he stood by his team and his report.

Weissmann’s book trashed two major Mueller decisions. One is Mueller choosing not to subpoena Trump to testify, and the other is Mueller's report not reaching a decision on whether Trump obstructed justice.

Barr said he and then-Deputy Attorney General Rod Rosenstein concluded that Trump had not obstructed justice.

A federal appeals court separately ruled this week that the Justice Department must release some of the redacted parts of Mueller’s report which apparently discussed individuals who were investigated by Mueller but not charged.

Funny how every time the Russian charges are proven false some new fake reports show up. Yet no one wants to investigate Biden’s son?

Killary, by the by, continues to be scottfree even though the paper tail actually lead back to her! I hope Demons haunt her sleep every night for eternity!!!!!

A member of the House committee investigating the Jan. 6 Capitol riot said on Sunday the committee has been talking with William Barr, the U.S. attorney general under former President Donald Trump.
CONGRESS & COURTS・18 HOURS AGO
WashingtonExaminer

The Biden Justice Department moved to block a subpoena to depose former President Donald Trump sent by Peter Strzok, who sued the FBI for wrongful termination from his role as special agent after the emergence of his anti-Trump texts.
WASHINGTON, DC・1 DAY AGO
WashingtonExaminer

Giuliani associate Igor Fruman sentenced to one year in prison

Igor Fruman, a former associate of Rudy Giuliani, was sentenced Friday to a year and a day in prison starting March 14 and fined $10,000 in a campaign finance case.
U.S. POLITICS・2 DAYS AGO
The Independent

The House select committee investigating the Jan 6 attack on Congress is seeking an interview with former Attorney General William Barr following the shocking revelation first reported by Politico that Donald Trump’s allies drafted an executive order directing the seizure of voting machines.Rep Bennie Thompson, the committee’s chairman, made the announcement on Sunday during an interview with ABC News. He added that lawmakers on the panel have spoken with Mr Barr previously in the course of their investigation, but were now interested in learning more about the draft executive order created some time in December of 2020.Appearing on This...
PRESIDENTIAL ELECTION・10 HOURS AGO

"They have not had to cast one bloody vote — which shows us where they're at," Sanders said of the legislative inaction. "We have got to change that."
VERMONT STATE・18 HOURS AGO
Newsweek

On Sunday the GOP lawmaker was asked about a proposed plan shared in the Trump White House to seize voting machines after the 2020 election.
CONGRESS & COURTS・17 HOURS AGO

Rep. Castro on Jan. 6 plot: “It’s becoming clearer..that Donald Trump and his minions orchestrated this at every level”

As more details are revealed about the scheme to overturn the 2020 election results, Texas Democratic congressman and former impeachment manager Joaquin Castro says this is a sign that that January 6th committee is “doing its job”. “Bennie Thompson is getting to the bottom of it,” Castro tells Ali Velshi. “Ultimately, the January 6th commission is going to have to make sure that every single person who helped plan that attack on the Capitol, including members of Congress and, if the evidence bears out, including the President of the United States are held accountable”. While the work continues in Washington, Castro’s home state of Texas is pushing the symptoms of the Big Lie further – enacting voting restrictions that make the process just difficult enough to be a deterrent to democratic participation. “A concrete example of how they get away with” these restrictions that eat away at rights little by little.Jan. 22, 2022.
TEXAS STATE・1 DAY AGO
The Independent

A Supreme Court expert has lambasted Clarence Thomas over his refusal to recuse himself from politically charged cases which his wife has openly lobbied over.Ginni Thomas, a longtime conservative activist, last week signed an open letter calling for the 6 January committee’s two Republican members to be ousted from the House GOP conference.Her husband was the sole Supreme Court justice to vote against releasing Donald Trump’s White House documents about the riots at the US Capitol in an 8-1 decision on Thursday. Supreme Court expert and journalist Elie Mystal told MSNBC’s The Reidout that Justice Thomas had a clear...
CONGRESS & COURTS・1 DAY AGO
Fox News

White House press secretary Jen Psaki was confronted Friday over President Biden's dismissal of a question about the Russia-Ukraine conflict as "stupid," saying he did in fact not dismiss the idea of "proactive deterrence." Biden was caught on a hot mic muttering "what a stupid question" after Fox News correspondent...
PRESIDENTIAL ELECTION・2 DAYS AGO
The Independent

Former Republican House Speaker Newt Gingrich has predicted that members of the House Select Committee investigating the Capitol riot on 6 January last year could be jailed if the GOP takes control of Congress after the midterms. “You’re going to have a Republican majority in the House and a Republican majority in the Senate,” Mr Gingrich told Fox News on Sunday. “All these people who have been so tough and so mean and so nasty are going to be delivered subpoenas for every document, every conversation, every tweet, every email because I think it’s clear that these are people...
CONGRESS & COURTS・17 HOURS AGO

"We made significant progress in making it easier for folks to vote in the pandemic in 2020," Sen. Coons said. "Why would we be rolling that back?"
CONGRESS & COURTS・21 HOURS AGO
Newsweek

Most analysts believe Republicans are well-positioned to take back control of the House in the midterms.
CONGRESS & COURTS・2 DAYS AGO
Business Insider

During his first months in office, Biden took laudable steps in the right direction on foreign policy, but he appears to have gotten cold feet.
PRESIDENTIAL ELECTION・13 HOURS AGO

Senate Judiciary Committee member Lindsey Graham, R-S.C., told Fox News that earlier Friday he met with former President Donald Trump and that the two had a frank discussion about the state of the country. Graham told "Hannity" that both agreed President Biden has been a disaster as commander-in-chief, and that...
POTUS・2 DAYS AGO
The Guardian

Liz Cheney among those to condemn remarks by former House speaker as committee member Zoe Lofgren says: ‘I think Newt has really lost it’
CONGRESS & COURTS・2 HOURS AGO
Newsweek