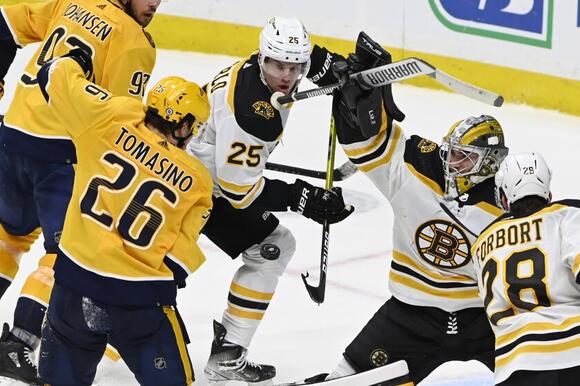 Swayman’s shutout was his first of the season and third of the rookie’s NHL career. After stopping 26 shots over the first two periods, Swayman was heavily tested in the third. Among his best saves in the final frame came when he denied Matt Duchene from the slot with the Predators on a power play.

“It was fun to watch,” Swayman said of his team’s effort. “Guys were taking pride in the defensive zone and also in the offensive zone. I had the best seat in the house watching them work, play together, a lot of talk out on the ice."

Juuse Saros made 31 saves for Nashville, which has dropped two of three.

“I thought both goaltenders played very well,” Nashville coach John Hynes said “They had some looks and (Saros) came up with some big saves for us. But they found a way to put two in and we didn’t.”

DeBrusk scored the first goal at 14:38 of the opening period. With the Bruins on a power play, he snapped a wrist shot from the top of the left faceoff circle past Saros and just underneath the crossbar on the short side.

“I think that Jake played pretty good tonight,” Bruins assistant coach Joe Sacco said. “He had a good game and hopefully he can build off of that, too. Like we said before, we want Jake to help our team any way possible, and he helped it with a big goal tonight.”

Boston has scored four power-play goals over the last three games in 10 opportunities.

Carlo added on 30 seconds into the second. Former Predator Erik Haula forced a turnover inside the Nashville blue line and sent a pass to Carlo in the high slot. He skated to his right and beat Saros with a slap shot on the stick side.

Bruins wing Craig Smith played his first-ever road game in Nashville on Thursday. Smith played the first 661 games of his NHL career with the Predators, the team that drafted him in the fourth round (98th overall) in the 2009 Draft.

During a first period media timeout, the Predators played a tribute video featuring Smith’s on and off ice accomplishments during his time in Nashville. At the conclusion of the video, players from both teams tapped their sticks on the ice and boards, and Smith skated to center ice thanking the cheering Bridgestone Arena fans.

With Brad Marchand sitting out the second of his three-game suspension Thursday, the Bruins sewed an assistant captain’s A on Smith’s jersey for the game.

Smith signed with the Bruins as a free agent prior to the start of last season.

Taylor Hall skated in his 700th career NHL game Thursday. After stints in Edmonton, New Jersey, Arizona and Buffalo, Hall is in his first full season with the Bruins.

The Predators revealed their navy Stadium Series jersey prior to Thursday night’s game. The Predators wore navy-colored jerseys as their dark jersey from the time they entered the league in 1998 until they switched to the current gold at the start of the 2011-12 season.

The Predators host the Montreal Canadiens on Saturday.

Erik Haula has played well centering Taylor Hall and David Pastrnak so far, but the Boston Bruins could still be in the market for a second-line center upgrade before the trade deadline. Here are five potential targets.
NHL・2 DAYS AGO
Boston Herald

The Bruins were on the verge of notching their signature win of the season at Ball Arena on Wednesday night. Instead, they became just another notch on the Colorado Avalanche’s belt in the Avs’ increasingly special season. The B’s blew a two-goal third-period lead, the equalizer coming with...
NHL・2 DAYS AGO
hockeyinsiders.net

The Boston Bruins and Colorado Avalanche played a very eventful game last night. The Avs came out to a 1-0 lead during the first period and the B's followed that up with 3 straight goals in the second period, however the Avs tired it up in the third and eventually won the game overtime.
NHL・1 DAY AGO
theScore

Colorado Avalanche star Nathan MacKinnon won't return to Wednesday's contest against the Boston Bruins after colliding with forward Taylor Hall during the opening period, the team announced. Hall knocked the shaft of MacKinnon's stick with his shoulder as the center tried to exit the zone, hitting him in the face...
NHL・2 DAYS AGO

37-year-old center Jeff Carter came to the Pens in April, he’s made such an impression, he received a contract extension after 12 goals & 14 assists this year
NHL・2 DAYS AGO
WFAN Sports Radio

WATCH: Devils former first-round pick Mike McLeod was dropped to the ice by Dallas’ Luke Glendening in a lopsided fight at The Rock on Tuesday night.
NHL・2 DAYS AGO
WGR550

Many of the Sens described the hit as a cheap shot and the NHL felt that Batherson was not eligible to be body checked. In addition, it was a high shoulder check that caused Batherson to fall dangerously and with force into the back wall.
NHL・2 DAYS AGO
Sportsnaut

With only eight games remaining between Thursday and the end of February, the Tampa Bay Lightning will look to get
NHL・2 DAYS AGO

While the Edmonton Oilers always would prefer the security that comes from an early lead, falling behind will not deter
NHL・2 DAYS AGO
San Diego Union-Tribune

Islanders game against Kraken postponed due to storm

The Seattle Kraken at New York Islanders game scheduled for Saturday has been postponed due to an impending snow storm in the New York area
NHL・10 HOURS AGO
abc17news.com

EDMONTON, Alberta (AP) — Connor McDavid scored the shootout winner and added a goal in regulation for Edmonton Oilers in their 3-2 win over the Nashville Predators on Thursday night. Evan Bouchard also scored for the Oilers, who have now won three straight after going 2-11-2 in their previous 15 games. Edmonton goalie Mikko Koskinen stopped all three Nashville shootout attempts. Filip Forsberg scored his 200th career goal and Matt Duchene also had a goal for the Predators, who lost for the first time in four games. The Oilers tied an unfortunate franchise record by allowing the game’s first goal for the 11th straight game.
NHL・1 DAY AGO
560 The Joe

In The Panthers We Trust

Jessica Blaylock talks about The Panthers winning ways and how their build and attitude all play a part plus what is Major League Baseball doing with The Hall of Fame.
NHL・2 DAYS AGO